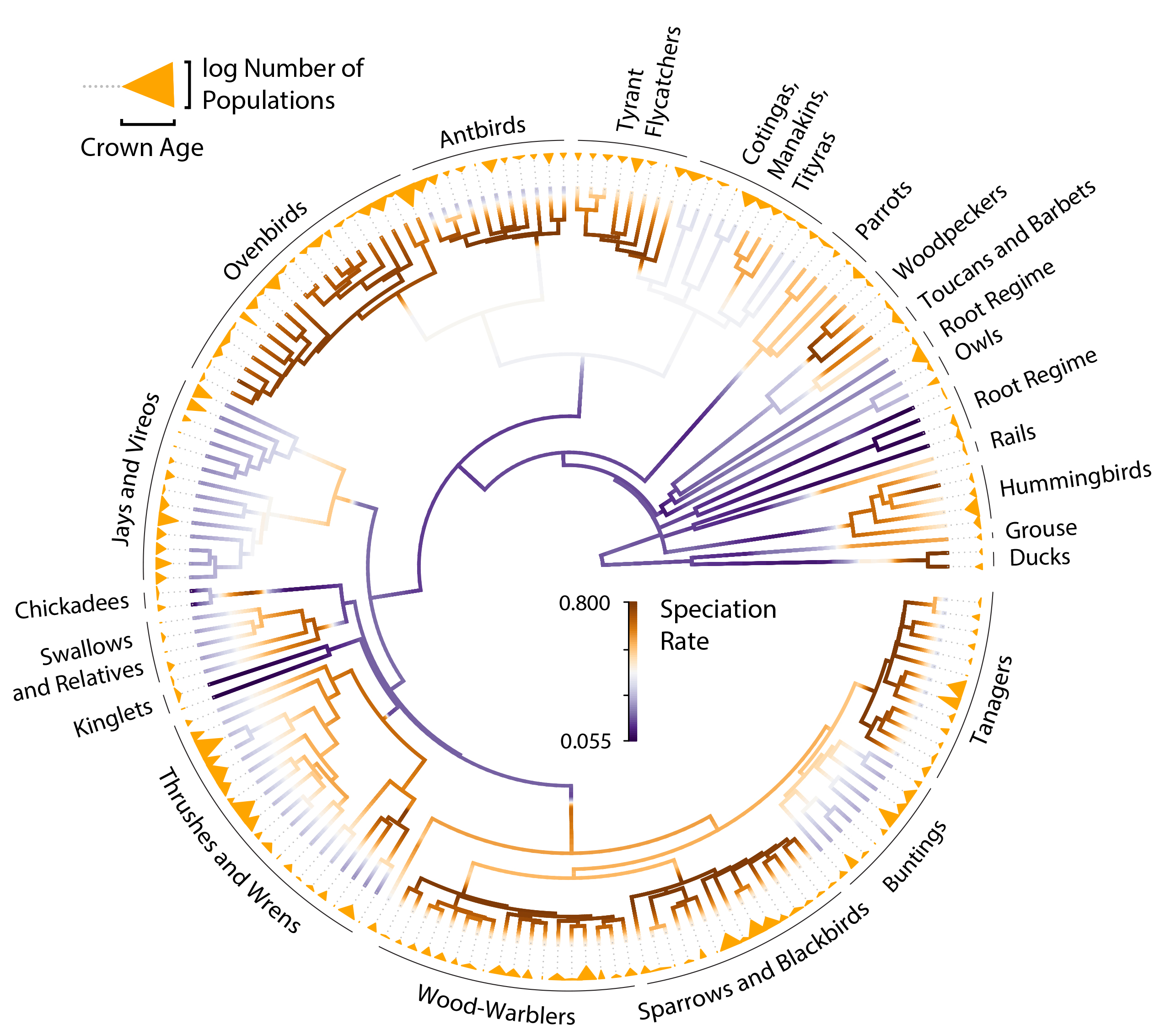 A circular phylogenetic tree of the 173 bird species included in the study and colored according to the rates they produce species over deep time. Surrounding the tree are triangles depicting the rate of population differentiation within each species. Image credit: Michael Harvey, PNASANN ARBOR—Biologists have always been fascinated by the diversity and changeability of life on Earth and have attempted to answer a fundamental question: How do new species originate?

An implicit assumption in the discipline of speciation biology is that genetic differences between populations of animals and plants in a given species are important drivers of new species formation and are a key to understanding evolution.

But that assumption has never been rigorously tested, until now, according to University of Michigan evolutionary biologist Michael Harvey, first author of a paper published online May 30 in Proceedings of the National Academy of Sciences.

Harvey and colleagues compiled and analyzed an unprecedented data set containing genetic sequences from 17,000 individuals in 173 New World bird species, ranging from ducks and owls to swallows and sparrows.

They demonstrated that species showing faster rates of genetic differentiation between populations are more likely to produce greater numbers of species over long evolutionary timescales.

“Our results are of fundamental significance because there are researchers across the world studying speciation, and many of them investigate genetic differences between populations that are in the process of forming new species,” said Harvey, a postdoctoral fellow in the Department of Ecology and Evolutionary Biology, in the laboratory of Daniel Rabosky.

“These researchers assume those genetic differences are important for evolution, but this has never been shown in a satisfactory way. We are the first to show that the differences between populations studied by speciation biologists have been fundamental determinants of the formation of the diversity of life.”

The researchers measured the rate at which genetic differences accumulated between populations in each of the 173 bird species. They then compared the rate of population differentiation to the probability that each bird species would form new species over time. This probability was based on the evolutionary track record of each species: How many species did its ancestors produce over the history of avian diversity?

They found that the rate of genetic differentiation within species is positively correlated with the rate of new species formation. The two rates were more tightly linked in tropical species than in temperate species.

They also found that the emergence of new populations within a species occurs at least three times faster than new species develop, suggesting that most differences between populations will not last long enough to impact species diversity.

“Overall, however, the study confirms the long-held assumption that the genetic differences between populations of a given species might predict its probability of contributing to the diversity of life,” Harvey said.

In addition to Harvey and Rabosky, authors of the PNAS paper are Glenn Seeholzer and Robb Brumfield of Louisiana State University, Brian Smith of the American Museum of Natural History and Andrés Cuervo of Tulane University.