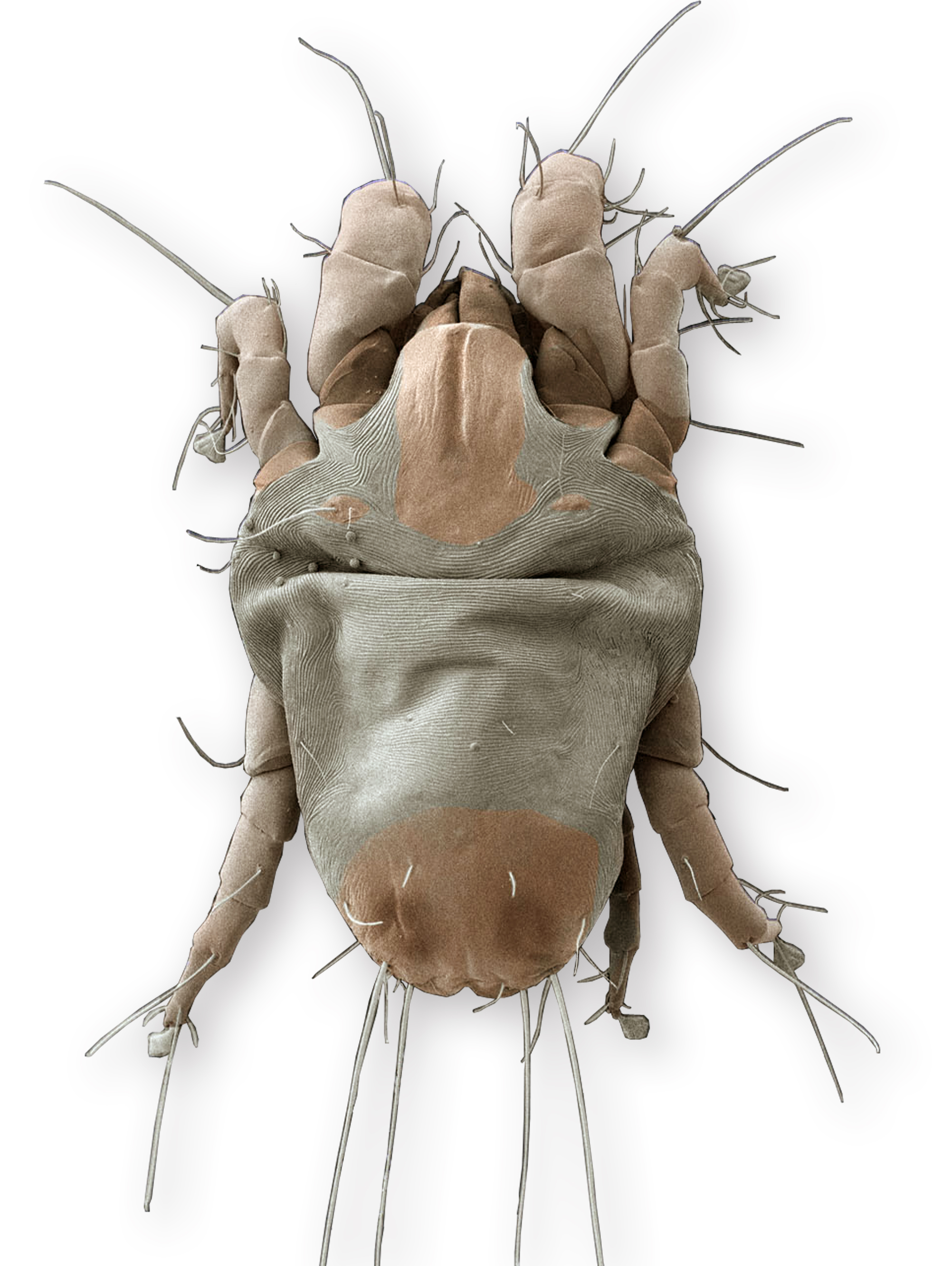 A scanning electron microscope image of an American house dust mite. Image credit: G. Bauchan and R. OchoaANN ARBOR—In evolutionary biology, there is a deeply rooted supposition that you can’t go home again: Once an organism has evolved specialized traits, it can’t return to the lifestyle of its ancestors.

There’s even a name for this pervasive idea. Dollo’s law states that evolution is unidirectional and irreversible. But this “law” is not universally accepted and is the topic of heated debate among biologists.

Now a research team led by two University of Michigan biologists has used a large-scale genetic study of the lowly house dust mite to uncover an example of reversible evolution that appears to violate Dollo’s law.

“All our analyses conclusively demonstrated that house dust mites have abandoned a parasitic lifestyle, secondarily becoming free-living, and then speciated in several habitats, including human habitations,” according to Pavel Klimov and Barry OConnor of the U-M Department of Ecology and Evolutionary Biology.

Their paper, “Is permanent parasitism reversible?—Critical evidence from early evolution of house dust mites,” is scheduled to be published online March 8 in the journal Systematic Biology.

Mites are arachnids related to spiders (both have eight legs) and are among the most diverse animals on Earth. House dust mites, members of the family Pyroglyphidae, are the most common cause of allergic symptoms in humans, affecting up to 1.2 billion people worldwide.

Despite their huge impact on human health, the evolutionary relationships between these speck-sized creatures are poorly understood. According to Klimov and OConnor, there are 62 different published hypotheses arguing about whether today’s free-living dust mites originated from a free-living ancestor or from a parasite—an organism that lives on or in a host species and damages its host.

In their study, Klimov and OConnor evaluated all 62 hypotheses. Their project used large-scale DNA sequencing, the construction of detailed evolutionary trees called phylogenies, and sophisticated statistical analyses to test the hypotheses about the ancestral ecology of house dust mites.

On the phylogenetic tree they produced, house dust mites appear within a large lineage of parasitic mites, the Psoroptidia. These mites are full-time parasites of birds and mammals that never leave the bodies of their hosts. The U-M analysis shows that the immediate parasitic ancestors of house dust mites include skin mites, such as the psoroptic mange mites of livestock and the dog and cat ear mite.

“This result was so surprising that we decided to contact our colleagues to obtain their feedback prior to sending these data for publication,” said Klimov, the first author of the paper and an assistant research scientist in the Department of Ecology and Evolutionary Biology.

The result was so surprising largely because it runs counter to the entrenched idea that highly specialized parasites cannot return to the free-living lifestyle of their ancestors.

“Parasites can quickly evolve highly sophisticated mechanisms for host exploitation and can lose their ability to function away from the host body,” Klimov said. “They often experience degradation or loss of many genes because their functions are no longer required in a rich environment where hosts provide both living space and nutrients. Many researchers in the field perceive such specialization as evolutionarily irreversible.”

The U-M findings also have human-health implications, said OConnor, a professor in the Department of Ecology and Evolutionary Biology and a curator of insects and arachnids at the U-M Museum of Zoology.

“Our study is an example of how asking a purely academic question may result in broad practical applications,” he said. “Knowing phylogenetic relationships of house dust mites may provide insights into allergenic properties of their immune-response-triggering proteins and the evolution of genes encoding allergens.”

The project started in 2006 with a grant from the National Science Foundation. The first step was to obtain specimens of many free-living and parasitic mites—no simple task given that some mite species are associated with rare mammal or bird species around the world.

The research team relied on a network of 64 biologists in 19 countries to obtain specimens. In addition, Klimov and OConnor conducted field trips to North and South America, Europe, Asia and Africa. On one occasion, it took two years to obtain samples of an important species parasitizing African birds.

A total of around 700 mite species were collected for the study. For the genetic analysis, the same five nuclear genes were sequenced in each species.

How might the ecological shift from parasite to free-living state have occurred?

There is little doubt that early free-living dust mites were nest inhabitants—the nests of birds and mammals are the principal habitat of all modern free-living species in the family Pyroglyphidae. Klimov and OConnor propose that a combination of several characteristics of their parasitic ancestors played an important role in allowing them to abandon permanent parasitism: tolerance of low humidity, development of powerful digestive enzymes that allowed them to feed on skin and keratinous (containing the protein keratin, which is found in human hair and fingernails) materials, and low host specificity with frequent shifts to unrelated hosts.

These features, which occur in almost all parasitic mites, were likely important precursors that enabled mite populations to thrive in host nests despite low humidity and scarce, low-quality food resources, according to Klimov and OConnor. For example, powerful enzymes allowed these mites to consume hard-to-digest feather and skin flakes composed of keratin.

With the advent of human civilization, nest-inhabiting pyroglyphids could have shifted to human dwellings from the nests of birds and rodents living in or around human homes. Once the mites moved indoors, the potent digestive enzymes and other immune-response-triggering molecules they carry made them a major source of human allergies.

This work was supported by the National Science Foundation and also benefited, in part, from specimens collected by the Field Museum’s Emerging Pathogens Project, funded by the Davee Foundation and the Dr. Ralph and Marian Falk Medical Research Trust. The molecular work was conducted in the Genomic Diversity Laboratory of the U-M Museum of Zoology.