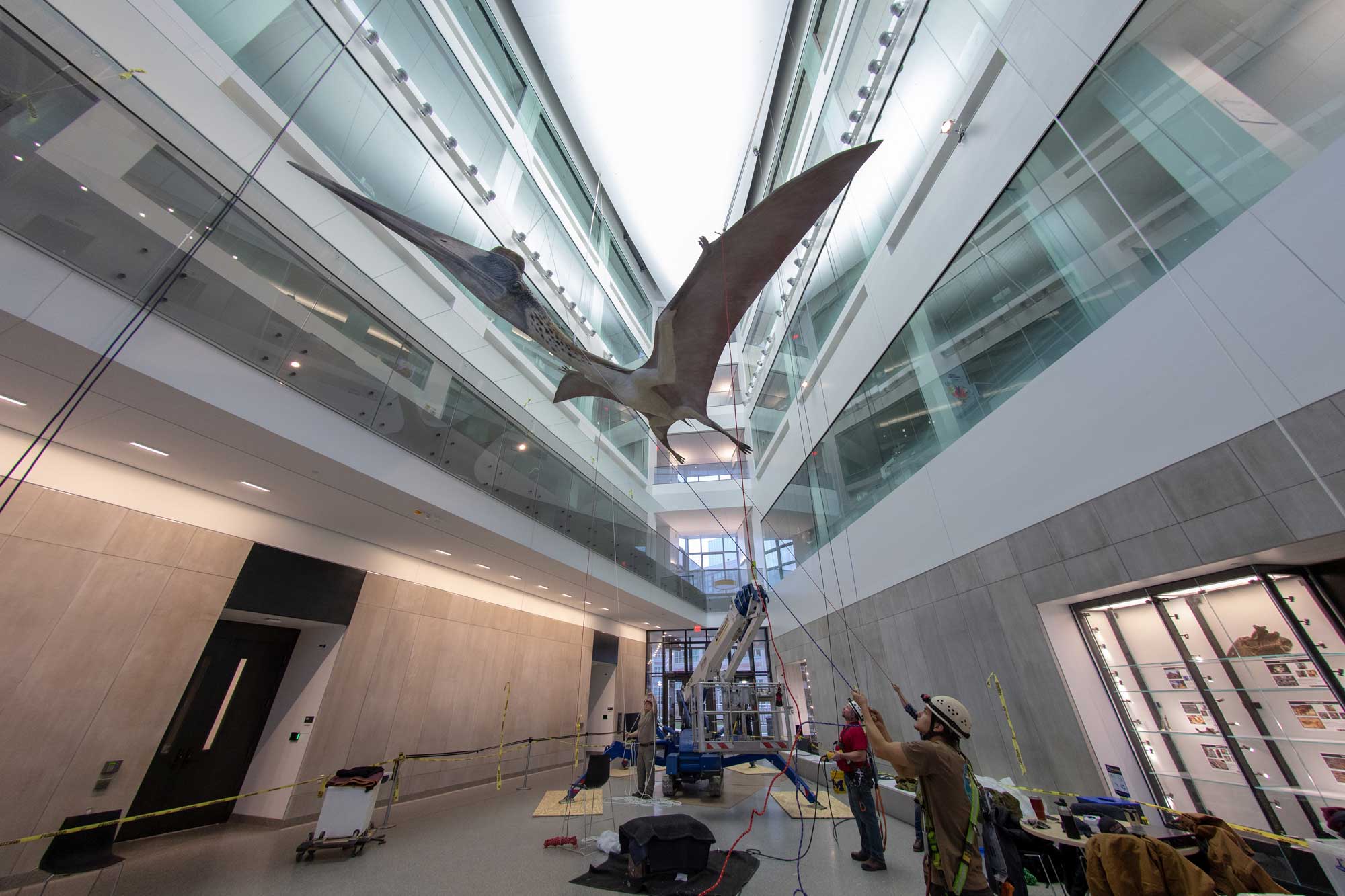 A life-size model of a prehistoric pterosaur is hoisted into place in a five-story atrium at the university’s new Biological Sciences Building, the new home of the university’s Museum of Natural History, which will reopen next spring. The creature, Quetzalcoatlus northropi, lived about 67 million years ago and was the largest known flying animal, with a 35-foot wingspan. The 700-pound model is a hand-painted fiberglass cast with an internal steel armature. Images credit: Roger Hart, Michigan Photography

ANN ARBOR—In preparation for the reopening of the University of Michigan Museum of Natural History next spring, a life-size model of a giant, prehistoric pterosaur was installed in a five-story atrium at the university’s new Biological Sciences Building this week.

Pterosaurs are often called flying reptiles and were relatives of dinosaurs and crocodiles. The new U-M reconstruction is of a pterosaur called Quetzalcoatlus northropi (ketts-all-co-OT-liss NORTH-row-pie), the largest known flying animal that ever lived. These winged creatures lived about 67 million years ago, shortly before an asteroid collision wiped out most of the life on Earth, including all the flying pterosaurs.

“Museum visitors are sure to be impressed by this full-size life reconstruction of a pterosaur the size of a small airplane,” said museum paleontologist Michael Cherney. “Fossils like this fuel our fascination with nature and evolution and give us perspective and context for understanding life on Earth.

“Quetzalcoatlus does a really good job of making it clear that life on our planet has changed a lot over time. Its preposterous size and proportions are like something out of fantasy or science fiction. Yet there’s also something very familiar about it. In fact, its extreme body has the same skeletal structure as animals living today.”

Quetzalcoatlus northropi is from Texas, but close relatives are found around the world. Fossils of two related species were recently discovered in Jordan. One of those creatures was about the same size as Q. northropi, and the other is a new species currently being described by U-M paleontologists.

The Q. northropi reconstruction was designed and sculpted by Blue Rhino Studio of Eagan, Minn., based on some of the latest scientific interpretations of Azhdarchid anatomy and biology. It is a hand-painted fiberglass cast with an internal steel armature for hanging. It has a 35-foot wingspan and is 25 feet long from beak to toe.

The 700-pound model was raised three stories into the air by fossil-installation experts from Research Casting International of Toronto.

The museum’s Quetzalcoatlus-in-flight model is displayed in the west atrium of the Biological Sciences Building, which includes classrooms and research labs. The Quetzalcoatlus exhibit was made possible, in part, through the generosity of Saroj and Jagdish Janveja, and Robin and Douglas Richstone.

The U-M Museum of Natural History reopens to the public in April 2019, with additional exhibits opening in November. It is located in the Biological Sciences Building, which serves as a hub of scientific innovation and will give the public an opportunity to discover science in action.