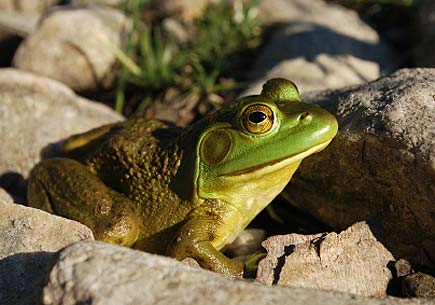 North American bullfrog. (stock image)ANN ARBOR—The global trade in bullfrogs, which are farmed as a food source in South America and elsewhere, is spreading a deadly fungus that is contributing to the decline of amphibians worldwide, according to a University of Michigan biologist and his colleagues.

Amphibian populations are declining worldwide at an alarming rate, and the spread of the deadly chytrid fungus is believed to be a contributing factor. The fungus infects the skin of frogs, toads and salamanders.

In a study to be published in an upcoming edition of the journal Molecular Ecology, University of Michigan evolutionary biologist Timothy James and his colleagues examine the role of bullfrog farming in spreading the chytrid fungus between the forests and frog farms of Brazil and then to the United States and Japan.

The researchers collected and analyzed bullfrogs sold at Asian food shops in seven U.S. cities and found that 41 percent of the frogs were infected with chytrid fungus, which is harmless to humans. Frogs in these shops are imported live primarily from farms in Taiwan, Brazil and Ecuador and sold as food for their legs.

James and his colleagues also analyzed bullfrogs from frog farms in Brazil and several native frog species from Brazil’s Atlantic Forest, one of the most amphibian-rich regions in the world. Their DNA sequencing studies identified the various strains of the chytrid fungus, Batrachochytrium dendrobatidis or Bd for short, present in the frogs.

The studies revealed four previously unknown strains of chytrid, including one that was present on a live bullfrog sold for frog legs in an Asian market in southeastern Michigan. The team determined that the Michigan bullfrog probably came from a frog farm in Brazil’s Atlantic Forest. Sampling of native frogs in that region revealed that the four closely related strains, known collectively by the researchers as the Brazilian strain or Bd-Brazil, are common in Brazil. By comparing their results to data in a previously published study, the researchers showed that the Brazilian strain is also present in bullfrogs in Japan.

The data suggest that the Bd-Brazil chytrid strain probably originated in Brazil among native frogs, rather than being introduced to the country by imported bullfrogs. The Bd-Brazil strain likely spread from infected native frogs to a Brazilian bullfrog farm and from there to other locations in bullfrogs shipped globally. 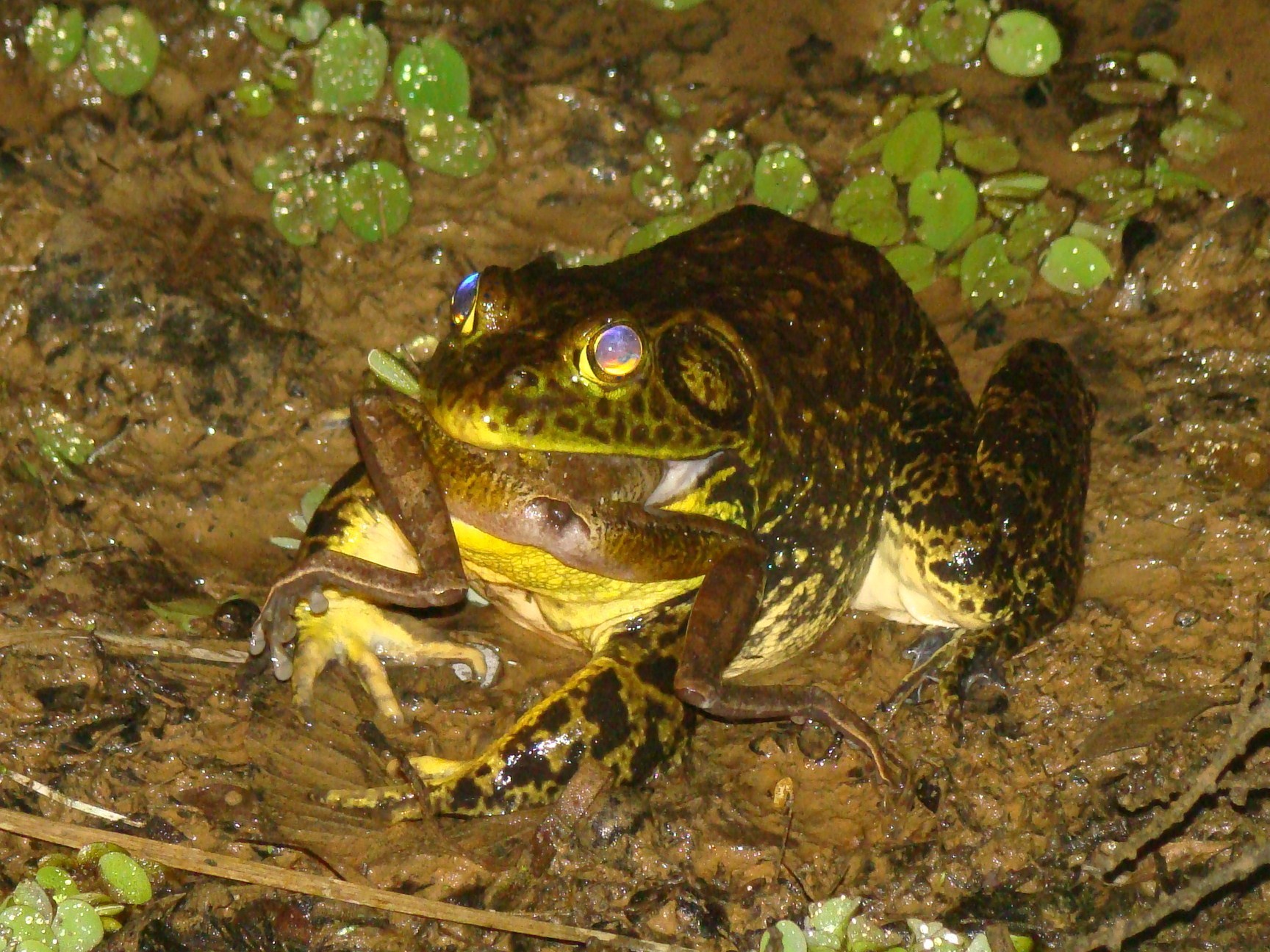 “Our data suggest that chytrid strains have been vectored across the globe by bullfrogs, which may have ultimately led to the disease being so widespread,” said James, an assistant professor in the Department of Ecology and Evolutionary Biology.

“A lot of the movement of this fungus is related to the live food trade, which is something we should probably stop doing,” James said. “We don’t need to have millions of live frogs being shipped from foreign countries into the United States.”

Nearly 5 million live frogs—more than half of them bullfrogs sold for food—are shipped to the United States each year. A previous study by the lead author of the Molecular Ecology paper, Lisa Schloegel, estimated that about half of those frogs are infected with chytrid fungus.

The Brazilian strain of chytrid fungus uncovered by James and his colleagues is genetically very different from the hyper-virulent global strain blamed for amphibian losses. But one of the team’s key findings provides “compelling evidence for the hypothesis that the global trade of amphibians may have significantly contributed to the emergence of hyper-virulent strains of Bd,” according to biologists Valerie McKenzie and Anna Peterson of the University of Colorado, who co-authored a News & Views Perspective article for Molecular Ecology about the James team’s findings. 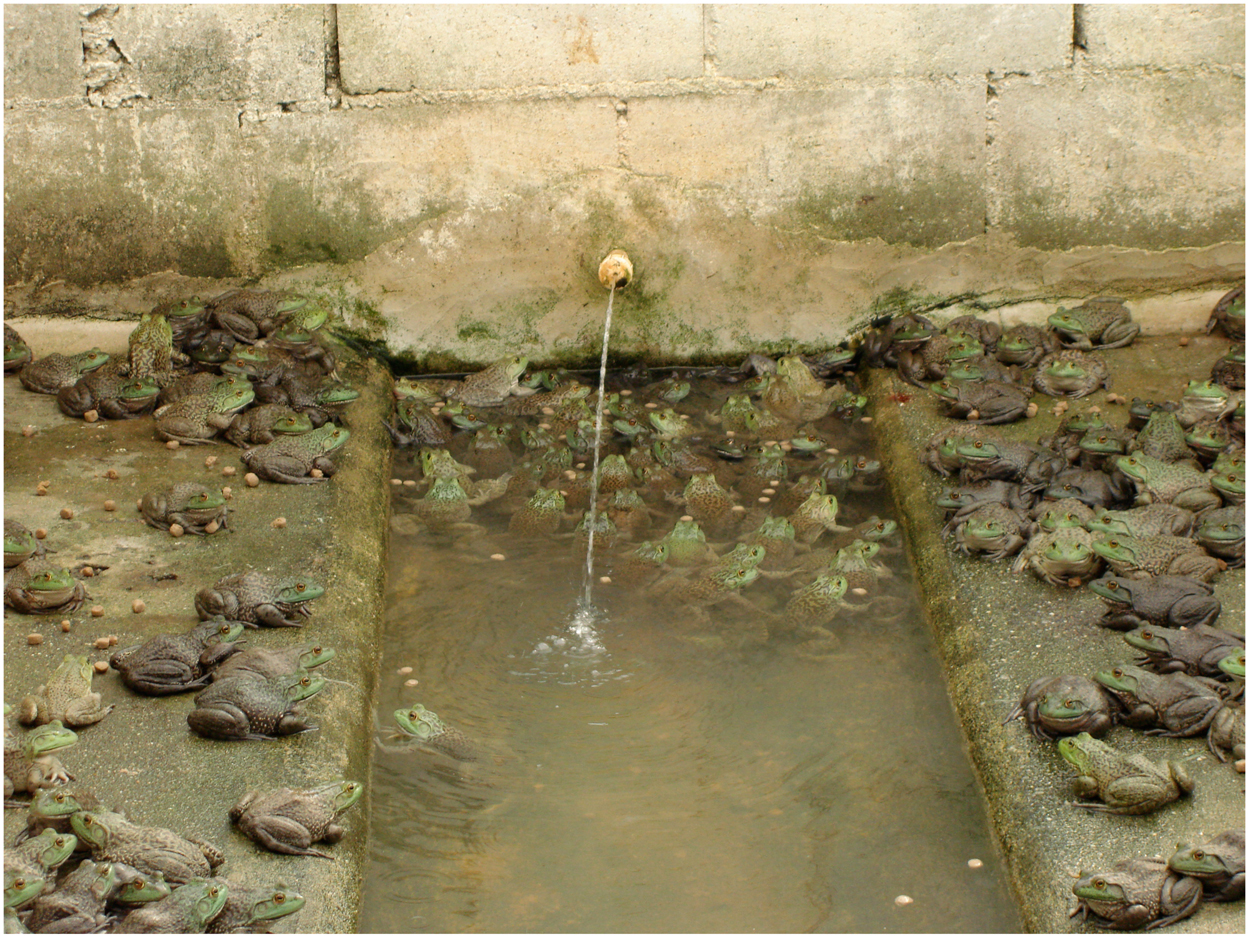 A bullfrog farm in Brazil. Bullfrogs are raised on farms in Taiwan, Brazil and Ecuador, then shipped live worldwide and sold as food for their legs. Photo by Lisa SchloegelAmong the strains isolated from native frogs in the Atlantic Forest was one that was the product of sexual reproduction between two genetically distinct chytrid strains. Most fungi are able to produce both sexually and asexually, but sexual reproduction had not previously been observed in the chytrid fungus, James said.

The observation of sexual reproduction in the chytrid fungus opens the door to the possibility that two genetically dissimilar strains of chytrid could breed to create a hybrid strain with increased virulence.

McKenzie and Peterson note that there is a healthy debate among chytrid researchers about whether the deadly fungus is a globally endemic organism that only recently started causing high mortality or the result of a virulent strain created from the hybridization of different chytrid strains that came into contact in recent decades, then rapidly spread around the world.

The new findings from James and his colleagues “provide credence to the hybridization hypothesis for the origin of the pandemic by demonstrating sex in chytrid for the first time,” James said. “We now know that hybridization is possible, and we know that there’s strain mixing going on through animal introductions. You put those findings together and it predicts that future epidemics could also occur through more strain mixing.” 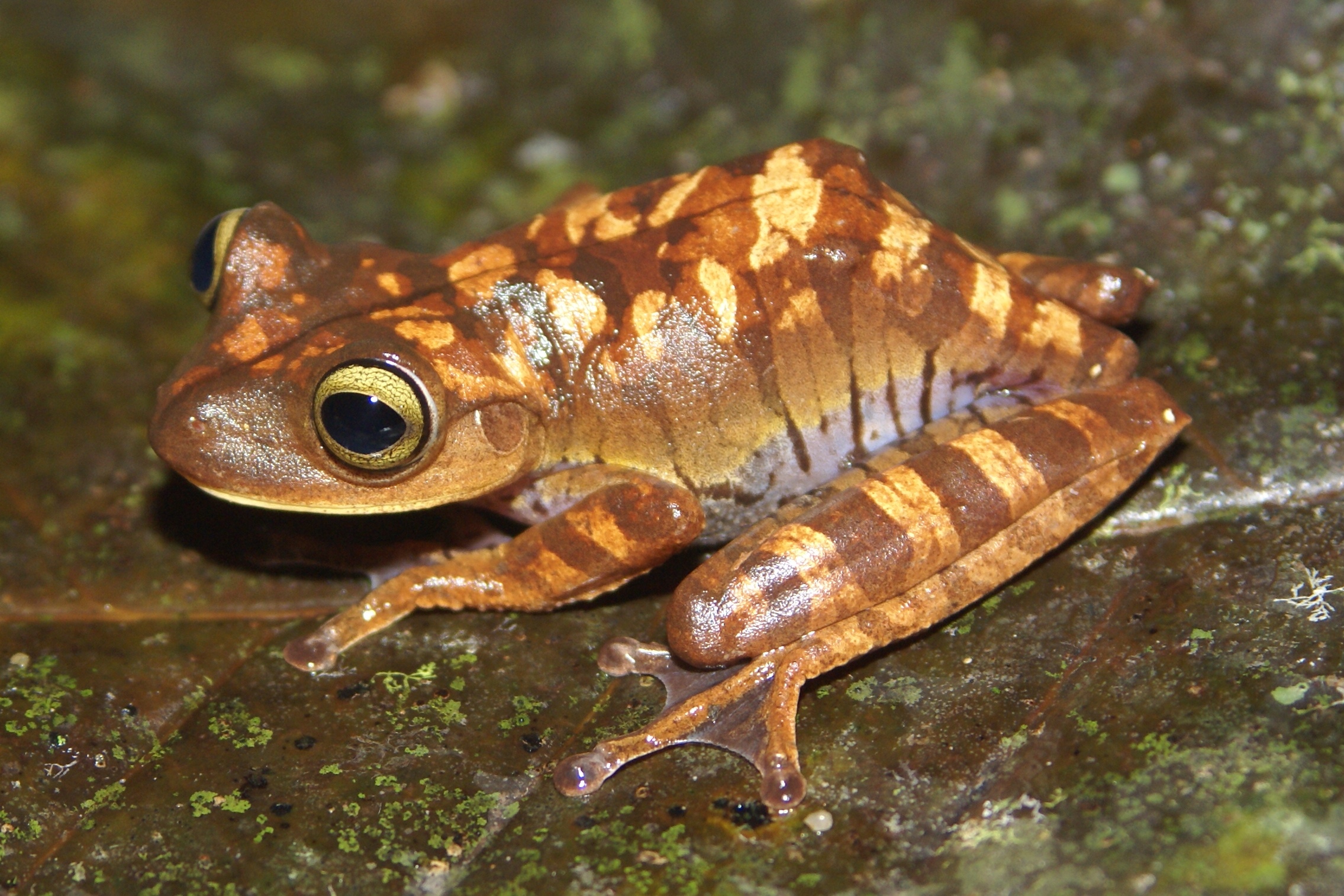 A frog native to Brazil’s Atlantic forest. This species, Bokermannohyla hylax, is known to be infected with the deadly chytrid fungus, which scientists say is contributing to the decline of amphibians worldwide. Photo by L. Felipe ToledoThe genetic hybrid discovered by the researchers is likely the result of sexual reproduction between the Bd-Brazil strain and one of the highly virulent strains blamed for amphibian die-offs. Those highly virulent strains of Bd are known as the global panzootic lineage, or Bd-GPL.

In addition to James, the authors of the Molecular Ecology paper are: Lisa Schloegel and Peter Daszak of EcoHealth Alliance; Luís Felipe Toledo and Conrado Augusto Vieira of the Universidade Estadual de Campinas in Campinas, Brazil; Joyce Longcore and Sasha Greenspan of the University of Maine; Maria Lee, Serena Zhao and Catherine Wangen of the University of Michigan; Cláudia Maris Fereira of the Fishery Institute in Sao Paulo, Brazil; Marcio Hipolito of the Biological Institute in Sao Paulo, Brazil; Angela Davies of Kingston University in Surrey, England; and Christina Cuomo of the Broad Institute of MIT and Harvard.

Funding for the study was provided by the Foundation for Research Support of the State of Sao Paulo, the National Science Foundation, the Eppley Foundation, the New York Community Trust, the EcoHealth Alliance and the University of Michigan.