ANN ARBOR—In a bid to identify and showcase the highest caliber of chamber music ensembles in the world, the University of Michigan has announced M-Prize, a new international competition that will present a grand prize of $100,000—the largest award of any competition of its kind.

M-Prize will be based at U-M’s School of Music, Theatre & Dance and will take place annually each May, beginning in 2016. Applications are now being accepted online, with a deadline of March 1, 2016. The competition will include two age divisions: Junior (ages 18 and under) and Senior (average age 19-35).

The competition, sponsored by Office of the Provost, will be open to ensembles of between three and eight members and will include categories for strings and winds as well as an “open” category for ensembles that can include mixed instrumentation, technology, voice and improvisation. During its inaugural year, M-Prize will focus on chamber music, but in ensuing years it plans to expand to include the full spectrum of chamber arts.

The M-Prize grand prize winner will be selected from one of three Senior Division Ensemble Finalists during a gala concert May 20 at U-M’s Hill Auditorium. The concert will be broadcast on Detroit Public Television and made available to PBS stations throughout the country.

In addition to the cash prize, the grand prize-winning ensemble also will be presented by University Musical Society of Ann Arbor on their chamber music concert series the following season. UMS, which recently received the National Medal of Arts, presents many of the world’s leading performing artists in classical music, jazz, world music, theater and dance. 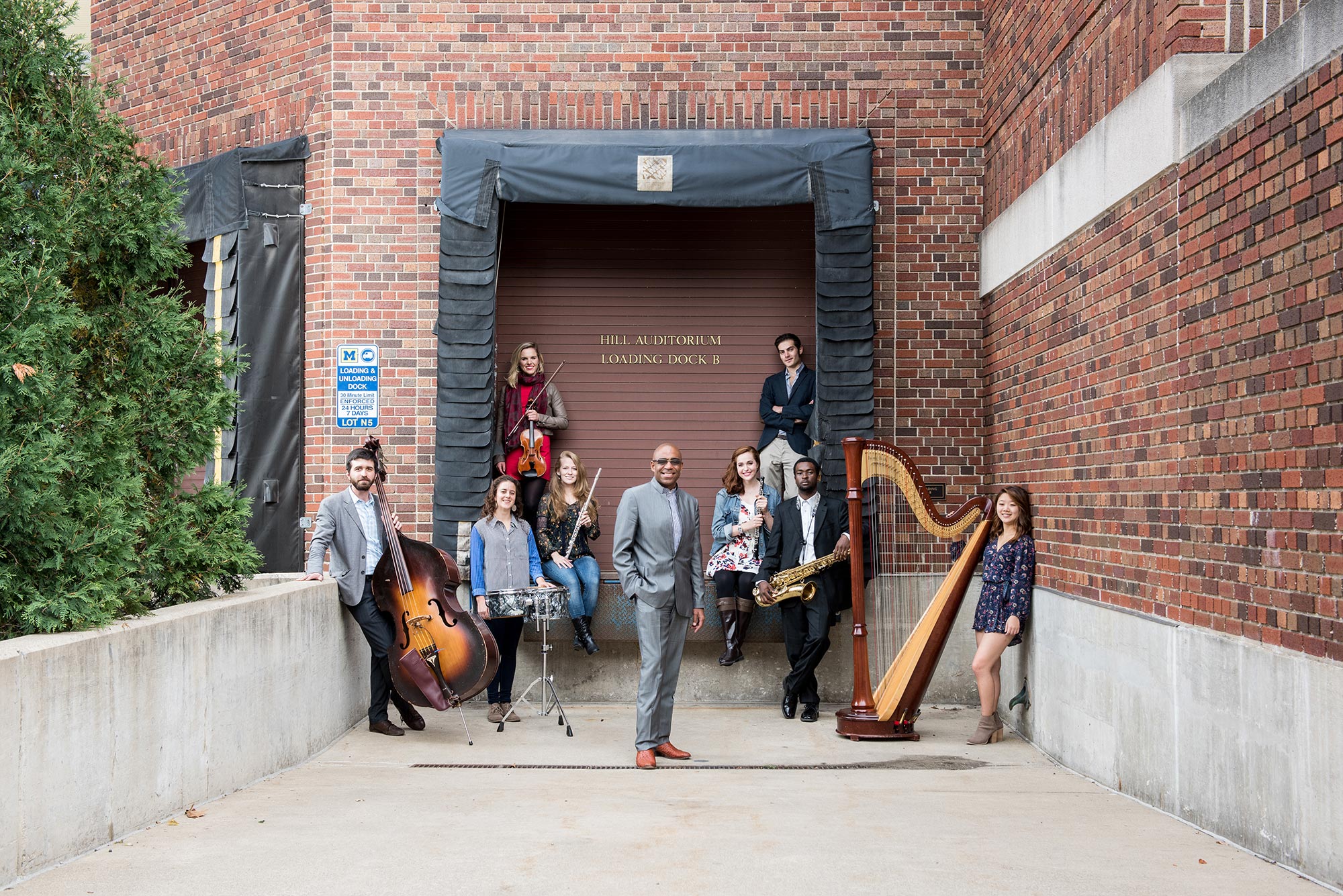 University of Michigan School of Music, Theatre & Dance students outside of Ann Arbor’s historic Hill Auditorium. The first $100,000 grand prize winner of the M-Prize Chamber Arts Competition will be awarded at Hill Auditorium on May 20, 2016. Left to Right: Andrew Peck, Nicole Patrick, Max Karmazyn, Stephen Grady, Heather Kendrick, Anna Gilpatrick, Anita Graef, Bret Patterson, Anna Thompson, Belinda Rosen, Annie Jeng, Christine Stinchi, Catherine Miller. Image credit: Eric Bronson, Michigan PhotographyAaron Dworkin, who became dean of SMTD in July, is the driving force behind the competition. The founder of the Sphinx Organization, the nation’s leading nonprofit for increasing diversity in the classical music world, Dworkin’s goal for M-Prize is to focus needed attention on chamber music. It is an art form that he believes will provide the most vibrant career paths for ensembles comprising conservatory-trained musicians and other performing artists.

“The vast possibilities inherent in chamber music empower it with the unique ability to serve as a catalyst for interdisciplinary exploration and, ultimately, transformational artistic experiences,” Dworkin said. “This has the eventual result of increasing the relevance of the chamber music field to society, and what better place to convene the established and emerging leaders in chamber music than the University of Michigan? As we prepare our students to excel, we are also looking to evolve the artistic landscape for performing artists.”

Among the first actions that Dworkin implemented as dean at SMTD was to create a Department of Chamber Music, along with a new program in entrepreneurship training and career services. He sees the two areas as inherently intertwined and views the M-Prize as a way to further the value of both.

“M-Prize will showcase how artists at the top of their field are forging their own careers, a necessity in the modern age of performing arts,” he said. “At the same time, it will encourage young artists to explore the limitless possibilities of the genre.”

The stated goals of the M-Prize competition are: