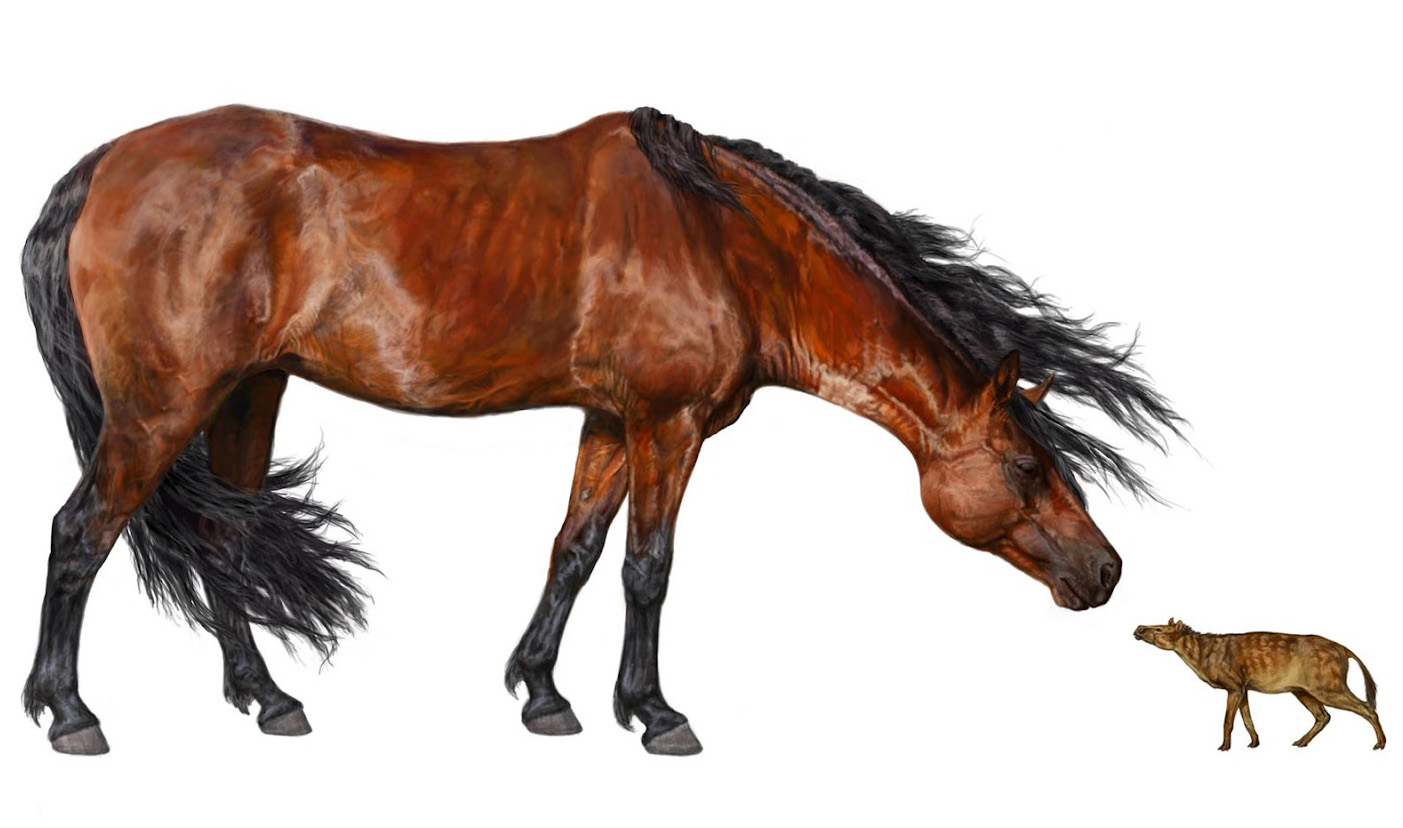 An artist’s rendering of the early horse Hyracotherium (right) alongside a modern-day horse. Researchers found that Hyracotherium body size decreased 19 percent during a global warming event about 53 million years ago. Image credit: Danielle Byerly, University of FloridaANN ARBOR—Mammal body size decreased significantly during at least two ancient global warming events. A new finding that suggests a similar outcome is possible in response to human-caused climate change, according to a University of Michigan paleontologist and his colleagues.

Researchers have known for years that mammals such as primates and the groups that include horses and deer became much smaller during a period of warming, called the Paleocene-Eocene Thermal Maximum (PETM), about 55 million years ago.

Now U-M paleontologist Philip Gingerich and his colleagues have found evidence that mammalian “dwarfing” also occurred during a separate, smaller global warming event that occurred about 2 million years after the PETM, around 53 million years ago.

“The fact that it happened twice significantly increases our confidence that we’re seeing cause and effect, that one interesting response to global warming in the past was a substantial decrease in body size in mammalian species,” said Gingerich, a professor of earth and environmental sciences.

The research team also includes scientists from the University of New Hampshire, Colorado College and the California Institute of Technology. The researchers are scheduled to present their findings Friday, Nov. 1, in Los Angeles at the annual meeting of the Society of Vertebrate Paleontology.

They concluded that decreased body size “seems to be a common evolutionary response” by mammals to extreme global warming events, known as hyperthermals, “and thus may be a predictable natural response for some lineages to future global warming.”

The PETM lasted about 160,000 years, and global temperatures rose an estimated 9 to 14 degrees Fahrenheit at its peak. The smaller, later event analyzed in the latest study, known as ETM2 (Eocene Thermal Maximum 2), lasted 80,000 to 100,000 years and resulted in a peak temperature increase of about 5 degrees Fahrenheit. 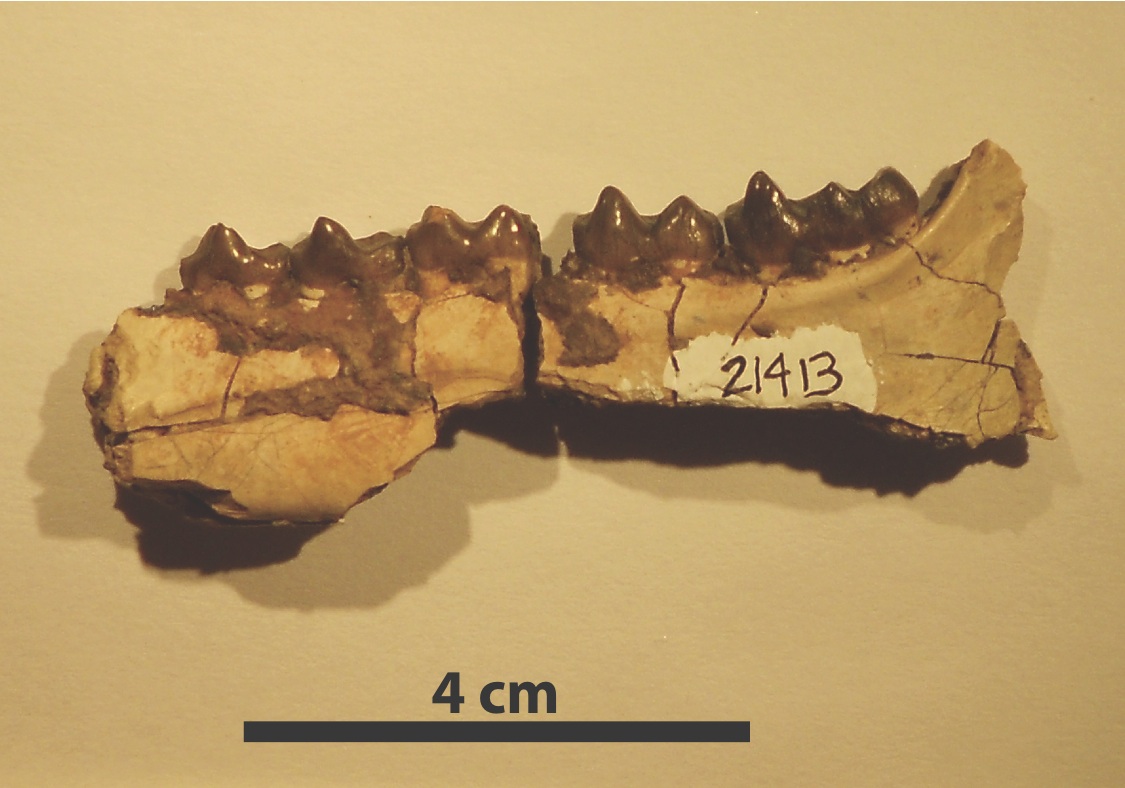 Jawbone fossil of the early horse Hyracotherium, collected in the Bighorn Basin region of Wyoming. Researchers found that Hyracotherium body size decreased 19 percent during a global warming event about 53 million years ago. Image credit: Abigail D’Ambrosia, University of New HampshireTeeth and jaw fossils of early hoofed mammals and primates that spanned this later climatic event were collected in Wyoming’s Bighorn Basin, and the size of molar teeth was used as a proxy for body size. The researchers found that body size decreased during ETM2, but not as much as the dwarfism seen in PETM fossils.

“Interestingly, the extent of mammalian dwarfism may be related to the magnitude of the hyperthermal event,” said team member Abigail D’Ambrosia of the University of New Hampshire.

An ancient ungulate called Diacodexis decreased about 20 percent in size during ETM2, and the primate Cantius decreased 8 percent.

The burning of fossil fuels and the resulting release of heat-trapping greenhouse gases—mainly carbon dioxide—is blamed for present-day climate warming. The ancient warming events may have been caused by the release of seabed methane clathrates, a kind of methane ice found in ocean sediments, though this topic remains an area of active research, Gingerich said. Methane is a more potent greenhouse gas than carbon dioxide, and atmospheric methane is eventually transformed into carbon dioxide and water.

The parallels between ancient hyperthermals and modern-day warming make studies of the fossil record particularly valuable, said team member Will Clyde of the University of New Hampshire.

“Developing a better understanding of the relationship between mammalian body size change and greenhouse gas-induced global warming during the geological past may help us predict ecological changes that may occur in response to current changes in Earth’s climate,” Clyde said.

In 2006, Gingerich proposed that mammalian dwarfing could be a response to the lower nutritional value of plants grown under elevated carbon dioxide levels. Under such conditions, plants grow quickly but are less nutritious than they would normally be.

Animals eating such plants might adapt by becoming smaller over time. Evidence from the ETM2 fossils is consistent with that hypothesis, and research on the topic is ongoing, Gingerich said.