ANN ARBOR—It’s a message no one wants to hear: To slow down global warming, we’ll either have to put the brakes on economic growth or transform the way the world’s economies work.

That’s the implication of an innovative University of Michigan study examining the evolution of atmospheric CO₂, the most likely cause of global warming. 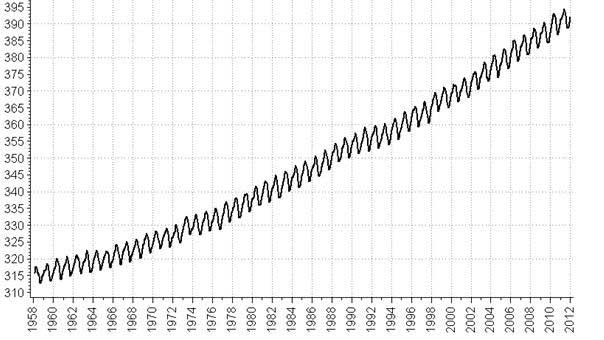 Atmospheric CO2 (monthly average) as measured in air samples collected at Mauna Loa, Hawaii (Keeling curve) from Feburary 1958 to Februrary 2012. Units are parts per million by volume. Estimated preindustrial concentrations, at levels between 200 and 300 ppm, would be far out of the graph.The study, conducted by José Tapia Granados and Edward Ionides of U-M and Óscar Carpintero of the University of Valladolid in Spain, was published online in the peer-reviewed journal Environmental Science and Policy. It is the first analysis to use measurable levels of atmospheric carbon dioxide to assess fluctuations in the gas, rather than estimates of CO₂ emissions, which are less accurate.

“If ‘business as usual’ conditions continue, economic contractions the size of the Great Recession or even bigger will be needed to reduce atmospheric levels of CO₂,” said Tapia Granados, who is a researcher at the U-M Institute for Social Research.

For the study, the researchers assessed the impact of four factors on short-run, year-to-year changes in atmospheric concentrations of CO₂, widely considered the most important greenhouse gas. Those factors included two natural phenomena believed to affect CO₂ levels—volcanic eruptions and the El Niño Southern oscillation—and also world population and the world economy, as measured by worldwide gross domestic product.

Annual growth of the world economic output (green line, trillions of 2000 US dollars) and annual change of estimated CO2 emissions (millions of Kt, black dots). Data on CO2 emisions for 2009 and 2010 were computed from preliminary estimates of carbon emissions obtained from the Carbon Dioxide Information Analysis Center (CDIAC) of the US Department of Energy on March 2012. All other data from the World Bank (that takes estimates of CO2 emissions from the CDIC).Tapia Granados and colleagues found no observable relation between short-term growth of world population and CO₂ concentrations, and they show that recent incidents of volcanic activity coincided with global recessions, which brings into question the reductions in atmospheric CO₂ previously ascribed to these volcanic eruptions.

In years of above-trend world GDP, from 1958 to 2010, the researchers found greater increases in CO₂ concentrations. For each trillion in U.S. dollars that the world GDP deviates from trend, CO₂ levels deviate from trend about half a part per million, they found. Concentrations of CO₂ were estimated to be 200-300 ppm during preindustrial times. They are presently close to 400 ppm, and levels around 300 ppm are considered safe to keep a stable climate.

To break the economic habits contributing to a rise in atmospheric CO₂ levels and global warming, Tapia Granados says that societies around the world would need to make enormous changes.

“Since the 1980s, scientists like James Hansen have been warning us about the effects global warming will have on the earth,” Tapia Granados said. “One solution that has promise is a carbon tax levied on any activity producing CO₂ in order to create incentives to reduce emissions. The money would be returned to the population on a per capita basis so the tax would not mean any extra fiscal burden.”