ANN ARBOR—A group of 33 competitors with University of Michigan connections punched their tickets to the 2016 Olympic Games and Paralympics that start next month in Brazil.

Twelve of them, including athletes and coaches, hail from the Men’s and Women’s Swimming & Diving programs. In addition, Michael Phelps—the most-decorated Olympian of all time who trained, coached and attended classes at U-M for four years beginning in 2004—will once again be part of the team.

Earlier this week, U-M men’s head swimming coach Mike Bottom was appointed to Team USA’s coaching staff for the upcoming games. He will assist head coach Bob Bowman, who worked as a U-M’s head coach from 2004 to 2008. 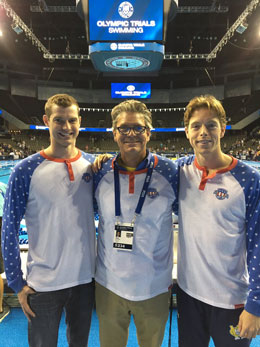 “I’ve been dreaming about this since I was 10 years old,” Bottom said in an interview with Michigan Athletics. “This is my Olympic dream. I’m ready to do whatever it takes to help the U.S. be successful in Rio. I can’t wait to get started.”

Two Hong Kong natives will be part of the women’s swimming competitions. Siobhán Haughey, an undergraduate from the College of Literature, Science, and the Arts, swam the 200-meter individual medley in 2:13.07 at the world championships in Kazan, Russia, and booked a trip to Rio last August.

Haughey, who started swimming at age 4, became the first swimmer from Hong Kong to make the world games in the country’s 63-year Olympic swimming history. 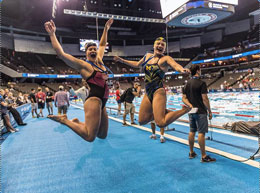 U-M athletes during Swim Trials 16, earlier this month.Former U-M swimmer Claudia Lau (2012-15) will join Haughey. The 23-year-old has been dreaming of making Hong Kong’s Olympic squad for the Summer Games for years, and her winning time gave her the opportunity. She competed in the 200-meter backstroke and won the race in 2:09.33.

On the men’s side, eight swimmers will represent six countries. The most recent athlete to become part of the U.S. Team is Michigan alum Connor Jaeger (2011-14). Last week, during the first day of the Olympic Team Trials, he won the 400-meter freestyle and will be part of the U.S. Olympic swimmers for the second time, after making the team in the 1,500-meter freestyle in 2012.

“I just went until I couldn’t feel my legs or arms anymore. The last 50, I peeped over and I was ahead. It was an incredible realization. I just went as hard as I could. I couldn’t believe I placed first,” Jaeger said.

As of early July, the University of Michigan will also have athletes in Men’s Gymnastics, Women’s Rowing, Sailing and Men’s and Women’s Track & Field. For more than a century, its students, student-athletes and coaches have represented their countries on the world’s biggest stage, collecting 157 Olympic medals.