ANN ARBOR—While the University of Michigan football team was trouncing Nebraska on Sept. 22 at the Big House, a small digital seismometer inside a Michigan Stadium storage closet recorded all the ground shaking generated by the sellout crowd of 111,037.

Designed to record ground motion during earthquakes, the portable device is being used this season by U-M geologist Ben van der Pluijm—in a project he calls Michigan Shake—to measure vibrations tied to crowd response after every touchdown, field goal, interception and punt return during all of the home football games.

Van der Pluijm will use the findings to teach his introductory geology students that all sorts of events, both natural and human-caused, shake the Earth to varying degrees and produce characteristic vibration patterns that a digital seismometer can detect and record.

“Earthquakes like the magnitude-7.5 event that triggered a devastating tsunami recently in Indonesia, volcanic eruptions, nuclear tests, mining explosions, hurricanes making landfall, building and bridge collapses, a dump truck rumbling down the road, a touchdown by the home team inside Michigan Stadium. All of these things generate vibrations that are transmitted through the Earth and recorded by seismometers,” said van der Pluijm, a professor in the Department of Earth and Environmental Sciences.

During the Nebraska game, which U-M won 56-10, the crowd erupted at 10:27 in the first quarter when U-M fullback Ben Mason scored the first points of the game on a one-yard run. That touchdown produced the biggest audience response of the first three U-M home games, measuring a 3.4 on van der Pluijm’s self-created Michigan Magnitude scale.

Seismogram showing the shaking in Michigan Stadium following the first University of Michigan touchdown during the Sept. 22 home football game against the University of Nebraska. The shaking was recorded by a seismometer installed inside the stadium and registered a 3.4 on the Michigan Magnitude scale devised by U-M geologist Ben van der Pluijm. Image credit: Ben van der Pluijm

The Michigan Shake seismometer was also used during in the Western Michigan, SMU and Maryland games and will be in operation during all remaining 2018 home games.

It’s not the first time that seismometers have picked up ground-shaking vibrations during football games. In 1988, a seismometer in a building near Louisiana State University’s football stadium detected the crowd’s reaction following the final pass in LSU’s upset win over Auburn University, which became known in local lore as the Earthquake Game.

And the Pacific Northwest Seismic Network, which monitors earthquake and volcanic activity throughout that region, has placed several earthquake sensors inside the Seattle Seahawks stadium to record crowd-generated vibrations during games.

Some university researchers have even attempted to assign earthquake-equivalent magnitudes to the ground-shaking antics of football fans. Scientists at one school claimed the home crowd erupted with the force of a magnitude-5.7 earthquake during a double-overtime win over an out-of-state rival several years ago.

The energy released by spectators at football games—even when it’s a capacity crowd at the Big House, the nation’s largest football stadium—is miniscule compared to the energy of even modest-sized earthquakes. The most boisterous touchdown celebration likely registers no more than a magnitude-1 on the seismic magnitude scale, he said. 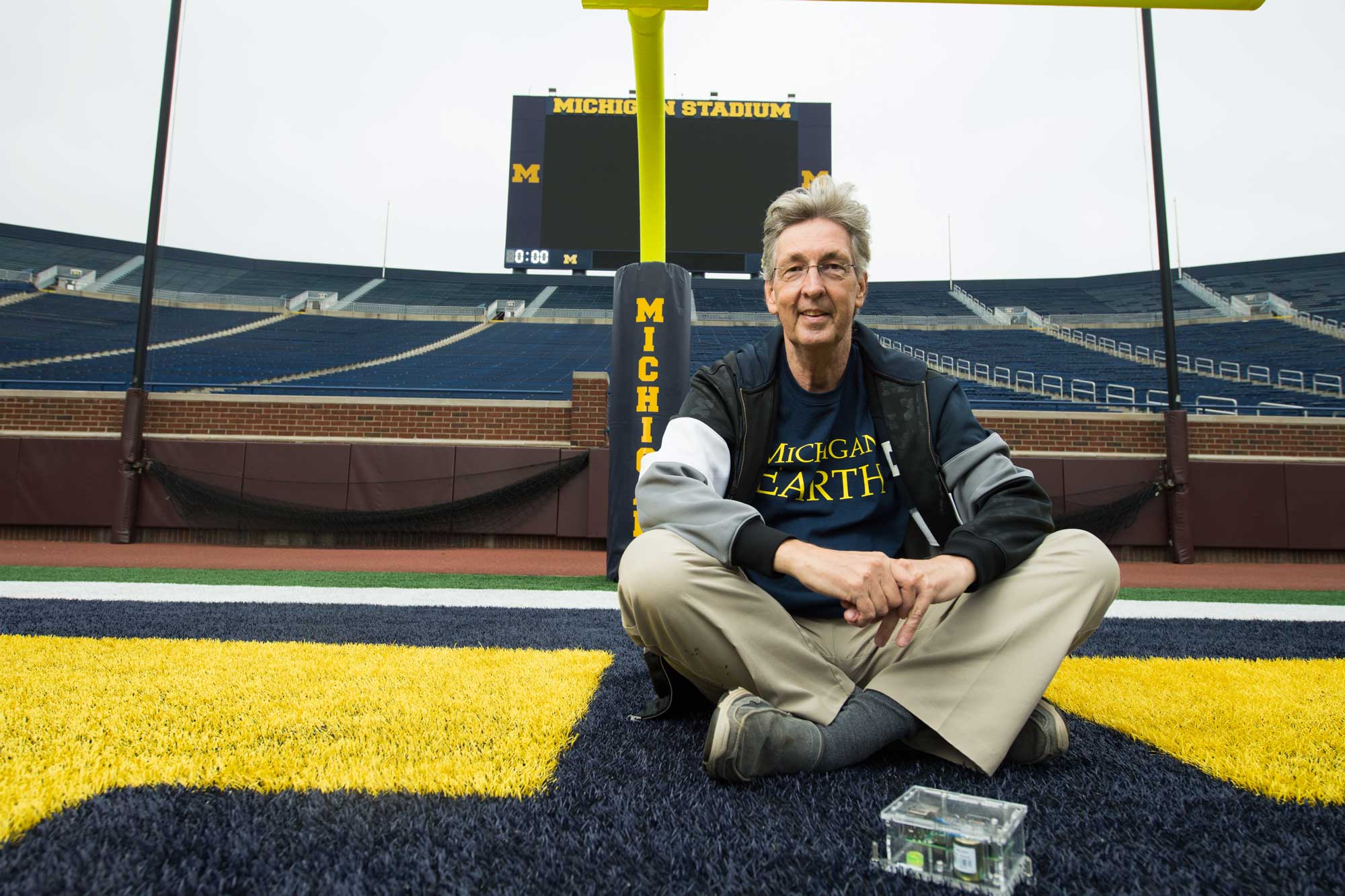 “No one who is serious about this will say that we can calculate the earthquake-equivalent magnitude of the shaking that these crowds generate. That would require better equipment and site calibration,” van der Pluijm said.

Even so, the logarithmic Michigan Magnitude scale that van der Pluijm devised allows him to compare discrete shaking events during individual games and to track how the intensity of the vibrations changes throughout the season. 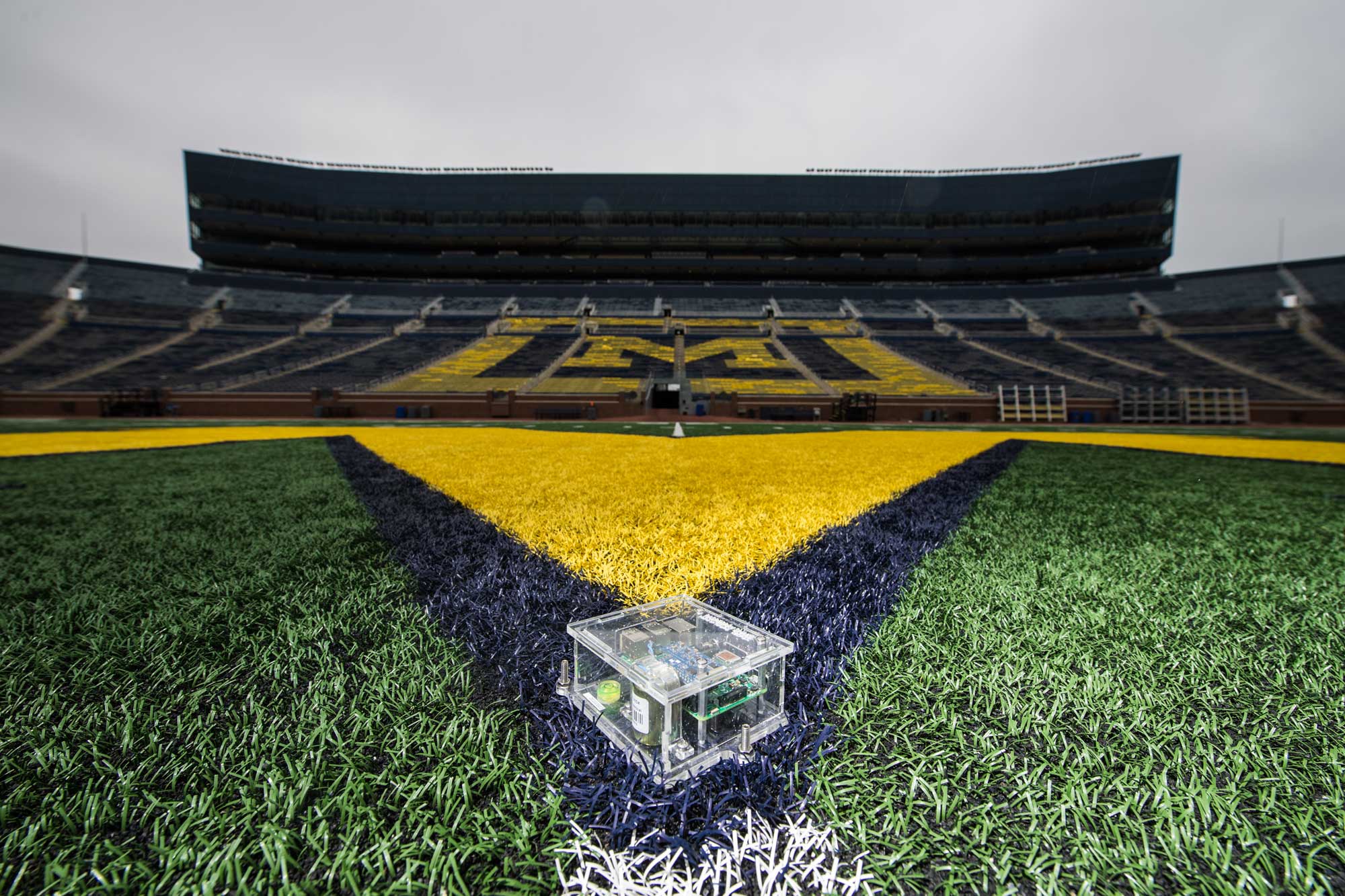 Closeup of a portable digital seismometer similar to the one used in the Michigan Shake project. Image credit: Austin Thomason, Michigan Photography

While the Michigan Shake seismometer was being tested on Sept. 6, two days before the home opener against Western Michigan University, it detected a deep, magnitude-7.9 earthquake that occurred roughly 7,500 miles away in Fiji, van der Pluijm said.

During Hurricane Florence, East Coast seismometers picked up the signal from ocean waves pounding the coastline. When a meteor exploded in the atmosphere over Michigan in January 2018, a seismometer on the U-M campus recorded its distinctive seismic signature. When a large Italian bridge collapsed and fell to the ground in August, killing more than 40 people, seismologists saw the unusual signal before newscasters reported the event.

And when a magnitude-7.5 Indonesian earthquake unleashed a killer tsunami on Sept. 28, seismic waves traveled through the Earth’s interior at speeds of several kilometers per second before reaching Michigan Stadium and registering on van der Pluijm’s Internet-connected seismometer.

“The aim of this project is to point out that all sorts of events—not just earthquakes—cause the Earth to vibrate to varying degrees, and seismometers detect all of it,” he said.

Van der Pluijm grew up in The Netherlands playing soccer and is not a huge fan of American football. But because of the Michigan Shake project, he’s been glued to the tube during all of this season’s home games, monitoring vibrations inside the stadium and noting the connection to events on the field.

And because television broadcasts are delayed by several seconds, van der Pluijm always sees the digital needle on his Michigan Shake seismometer jump a few seconds before a big play occurs.

Michigan Stadium staff helped van der Pluijm install the low-cost seismometer in the stadium’s IT storage room, which had two benefits. The room’s concrete floor helps transmit vibrations, and the location made it easy for him to connect to the Internet.

“It’s working remarkably well with a very simple setup and some generous help from stadium staff,” van der Pluijm said. “So, it looks like I’ll be watching more football games this season.”

“If you want a bigger Michigan magnitude, then stomp your feet,” he said.

More information about the project is available at the Michigan Shake website. However, fans are not yet able to track crowd response in real time by checking the website during the game. The data undergoes some processing before it’s loaded to the site after each home game.