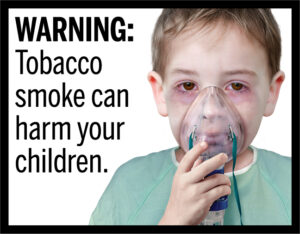 A child with an oxygen mask. A diseased lung. A woman with a huge bump on her neck.

Adding warning labels like these with graphic depictions of the negative health consequences of cigarette smoking could have averted thousands of smoking-related deaths if approved as originally planned in 2012, according to a new analysis by University of Michigan researchers and colleagues from the Cancer Intervention and Surveillance Modeling network (CISNET) Lung Group.

If the U.S. Food and Drug Administration does require tobacco companies to include the graphic warning labels on cigarette packages in October 2022, as it’s expected to do, between 275,000 and 794,000 smoking-attributable deaths could be averted by 2100, and between 4 million to 11.6 million life-years could be gained during that period.

While the FDA had planned to implement the graphic warning labels nine years ago, it has been entangled in litigation with the tobacco industry over the issue. The rules to add the labels include textual warnings and color graphics with photorealistic images depicting the negative health consequences of cigarette smoking, such as warnings that smoking can cause erectile dysfunction or head and neck cancer, and can lead to COPD.

“Industry litigation and delays to implementing tobacco regulations have high costs to public health,” said Rafael Meza, professor of epidemiology and global public health at U-M’s School of Public Health and senior author of the study published in JAMA Health Forum. “This research shows that we must move forward with implementation to maximize the benefits of adding graphic health warnings to cigarette’s packaging.”

For their study, researchers simulated smoking and mortality outcomes associated with the health warnings using the CISNET Smoking History Generator Population Model and previously published research of the expected impacts of graphic health warnings on smoking prevalence and cessation. The assumptions in the model are based in part on what has been seen in other countries like Canada and Australia that have already rolled out these graphic warnings.

All CISNET lung cancer models are based on inputs from the Smoking History Generator, which simulates detailed individual-level life and smoking histories: birth, probabilities of smoking initiation, smoking cessation and death. Because graphic health warnings have never been implemented in the United States, researchers could not perform external validation of the policy scenarios.

The researchers acknowledge that while literature on graphic health warnings demonstrates their public health benefit, uncertainty remains about the true magnitude of their effect on smoking behavior, especially with regard to smoking initiation.

Researchers first modeled a baseline scenario with the current status quo and then calculated smoking attributable deaths under different graphic health warnings scenarios. The team varied the time of implementation of the warnings and their impact on smoking initiation and cessation to more accurately capture the uncertainty in the actual effects that health warnings could have on smoking behaviors and outcomes.

If the warnings had been implemented in 2012, researchers estimate about 365,000 to 1,060,000 deaths might have been prevented, and 5.7 million to 16.6 million life-years could have been gained, roughly 40% higher. The upcoming policy and its simulated impacts on population health can be explored in more detail online through the Tobacco Control Policy Tool.

“This shows the health costs of delaying implementation of this regulation by 10 years due to industry litigation and procedural delays,” said Meza, who is also the principal investigator of the CISNET Lung Cancer Working Group and the Center for the Assessment of Tobacco Regulations.

More than 120 countries have required graphic health warnings on cigarette packs and saved lives by doing so, said the study’s first author, Jamie Tam, an assistant professor at the Yale School of Public Health.

“The U.S. has been lagging behind the rest of the world when it comes to this issue, so we are long overdue,” she said.