ANN ARBOR—A new University of Michigan study challenges a popularized view about what’s causing the growing gap between the lifespans of more- and less-educated Americans—finding shortcomings in the widespread narrative that the United States is facing an epidemic of “despair.”

Some influential studies have argued that growing life expectancy inequality is driven by so-called “deaths of despair,” suggesting that economic stagnation has induced less-educated Americans to turn to drugs, alcohol and suicide.

Yet, that explanation is inconsistent with a large body of research on the way many disadvantaged Americans respond to stress, says Arline Geronimus, a professor at U-M’s School of Public Health and lead author of the study published in the June issue of the Journal of Health and Social Behavior.

“The assumption that people are giving up neglects the existing research that shows the engaged and tenacious ways people often deal with life challenges,” Geronimus said.

Geronimus and her team set out to look at whether the empirical data backed this concept. They used Census and Vital Statistics data to evaluate historically relevant causes of deaths—including opioids, cardiovascular disease, HIV, and lung or other cancers—for non-Hispanic blacks and whites between 1990 and 2015, ranking them by gender and education (less or more educated). 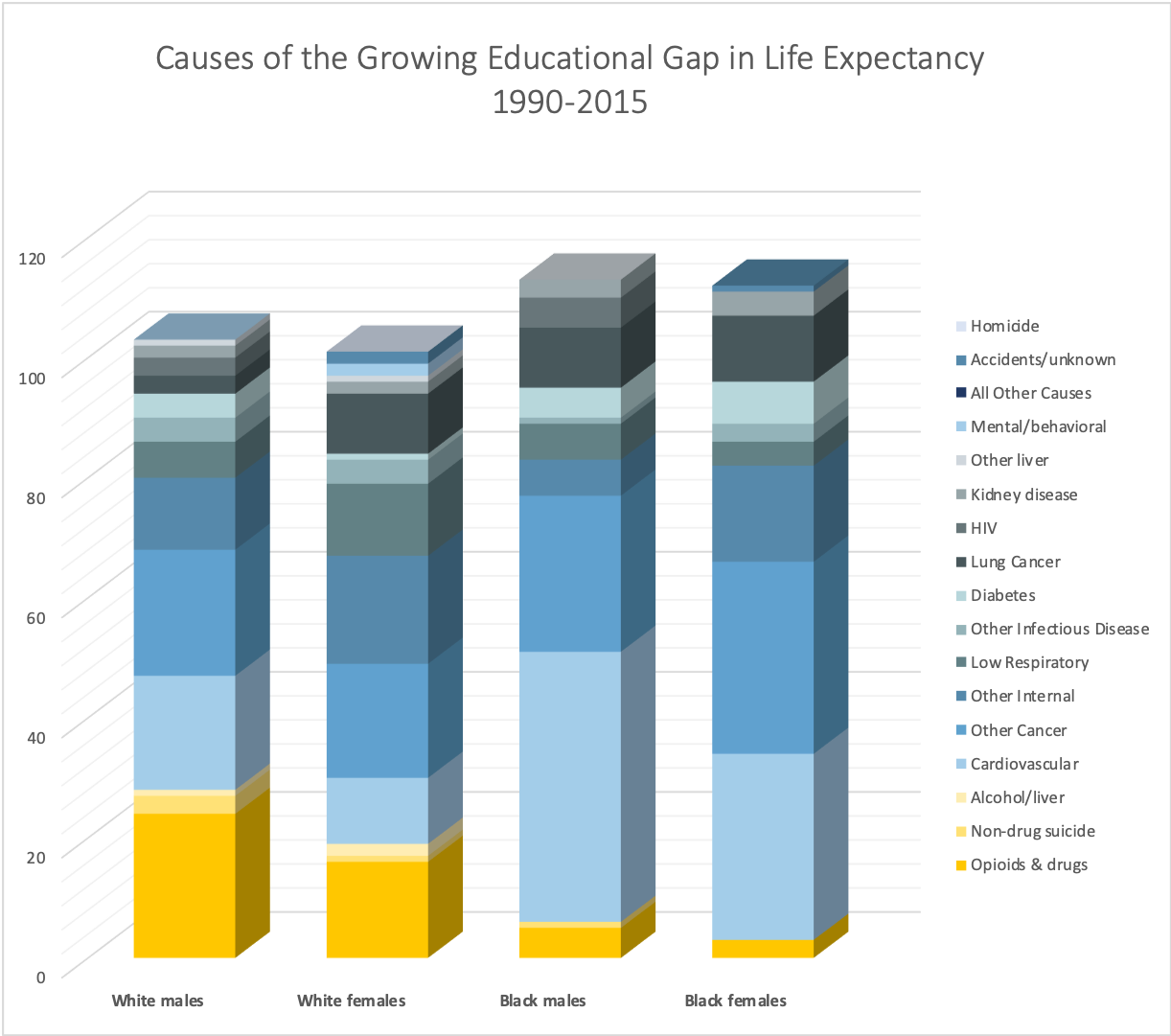 When looking at the deaths of despair (drug overdose, suicide and alcohol-related liver diseases), the researchers found that drug overdoses do contribute to the widening inequality for whites, especially men, but that’s not the case for blacks. Also, they found that overdose deaths are less important for growing inequality in women’s life expectancy.

For older adults, where the growth in inequality is largest, premature death due to cardiovascular disease and cancers are the main reason for the widening gap—not overdose deaths. The early onset and progression of such chronic diseases can reflect the physiological impact of prolonged and resolute coping with life stressors, Geronimus says.

She points out that suicide rates have contributed little to the growing inequality gap, contrary to the “deaths of despair” theory. Instead, deaths due to cardiovascular disease, non-lung cancers and other internal diseases might help explain important shares of the growing life expectancy gap between those less educated and their highly educated counterparts, Geronimus says.

“These findings suggest that, rather than giving up in the face of hopelessness, less-educated Americans may be losing ground for exactly the opposite reason—because they work so hard, they bear the health consequences of years of stress,” she said.

As for the opioid epidemic, Geronimus says researchers should also consider how targeted marketing to white populations, overprescription of legal opioids by physicians, the increasing use of fentanyl in street drugs, and restricted access to life-saving resources have all contributed to the increase in inequality in life expectancy accounted for by opioid deaths in whites.

“The deaths of despair narrative is speculative, overlooks black lives and implies that lack of resilience explains the life expectancy inequities among whites, especially of those who have been socioeconomically disenfranchised,” Geronimus said.

“While addressing the opioid epidemic is urgent, we should not lose sight of the widening educational mortality gap attributed to cardiovascular disease, cancers and other internal causes.”