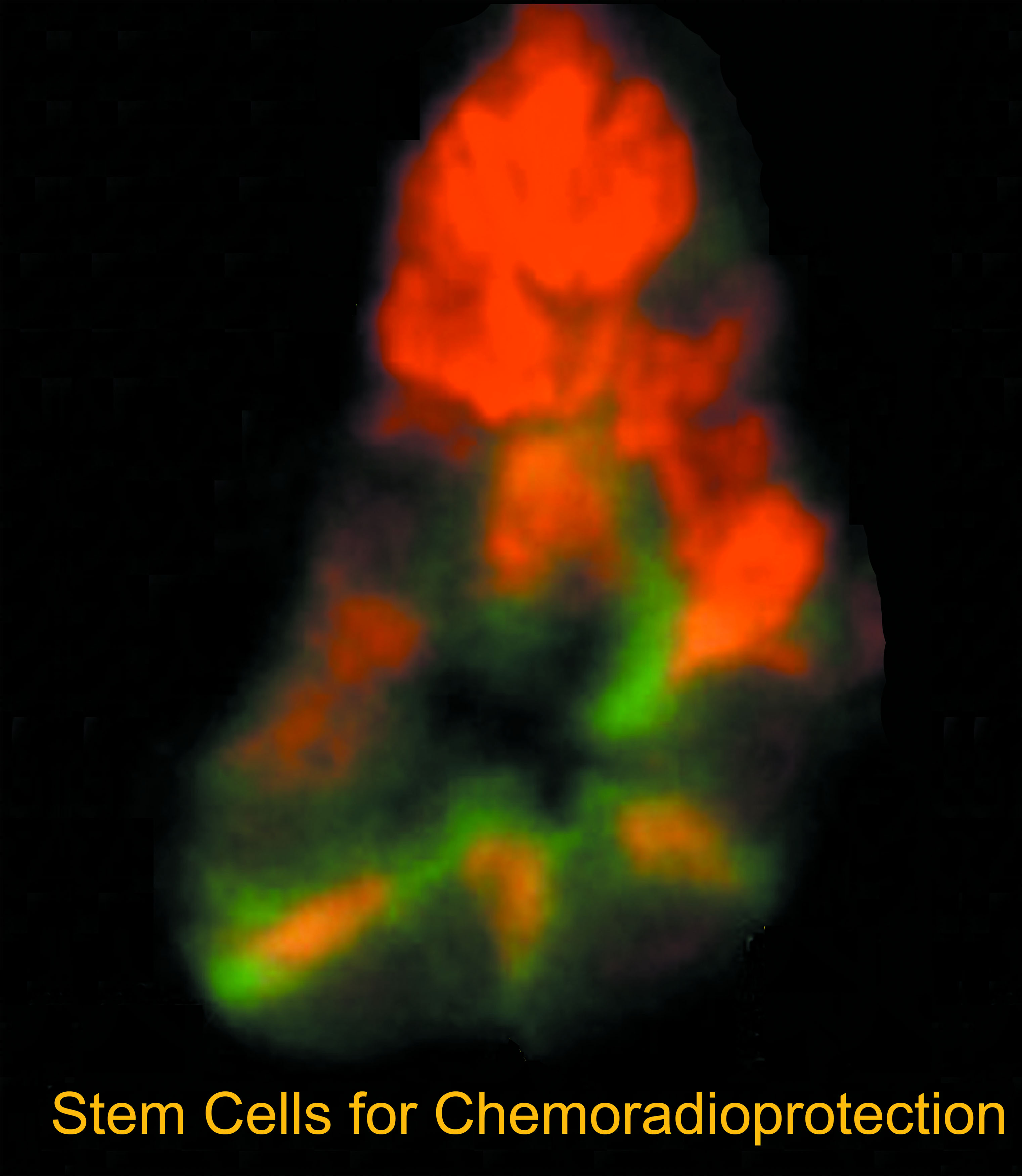 The discovery of Robo1 protein in the intestinal stem cells (depicted in yellow) leads to tolerance of higher doses of chemoradiation in mice. Image courtesy Dr. Wei-Jie Zhou.ANN ARBOR—Treating a cancerous tumor is like watering a houseplant with a fire hose—too much water kills the plant, just as too much chemotherapy and radiation kills the patient before it kills the tumor.

The findings, which will appear in the journal Nature, could revolutionize cancer therapy, Geng said. He emphasized that this had not yet been tested in humans, and right now there’s no way to know if people will respond similarly.

“All tumors from different tissues and organs can be killed by high doses of chemotherapy and radiation, but the current challenge for treating the later-staged metastasized cancer is that you actually kill the host before you kill the tumor.

“It’s our belief that this could eventually cure later-staged metastasized cancer. People will not die from cancer, if our prediction is true,” said Geng. “We cannot know this yet, but in mice it has shown promise. Years down the road, we may have a way to make humans tolerate lethal doses of chemotherapy and radiotherapy. In this way, the later-staged, metastasized cancer can be eradicated by increased doses of chemotherapy and radiation.”

Geng’s lab found that when certain proteins bind with a specific molecule  on intestinal stem cells, it revs intestinal stem cells into overdrive for intestinal regeneration and repair in mice. Stem cells naturally heal damaged organs and tissues, but so-called “normal” amounts of stem cells in the intestine simply cannot keep up with the wreckage left behind by the lethal doses of chemotherapy and radiation required to successfully treat late-stage tumors.

However, the phalanx of extra stem cells protect the intestine and gastrointestinal tract, which allows the ingestion of nutrients so the body can perform other critical functions and the bacterial toxins in the intestine are prevented from entering the blood circulation, Geng said.

In the future, if the findings are tested in humans and show promise, these factors could give human cancer patients just enough of an extra edge to survive the stronger doses of chemotherapy and radiation, until the tumor or tumors are eradicated.
Geng stressed that even if the findings do show promise in humans, it could take a decade or longer before an application becomes available to use on people.

“Now we have found a way to protect the intestine in mice. The next step is to aim for a 100-percent survival rate in mice who are injected with the molecules and receive lethal doses of chemotherapy and radiation.”

Geng’s lab has worked with these molecules, called R-spondin1 and Slit2, for more than a decade. These molecules repair tissue in combination with intestinal stem cells residing in the adult intestine.

The study, “Induction of intestinal stem cells by R-spondin 1 and Slit2 augments chemoradioprotection,” was supported by grants from the National Institutes of Health.