Heading to the hospital? Even with insurance, it may cost you at least a grand 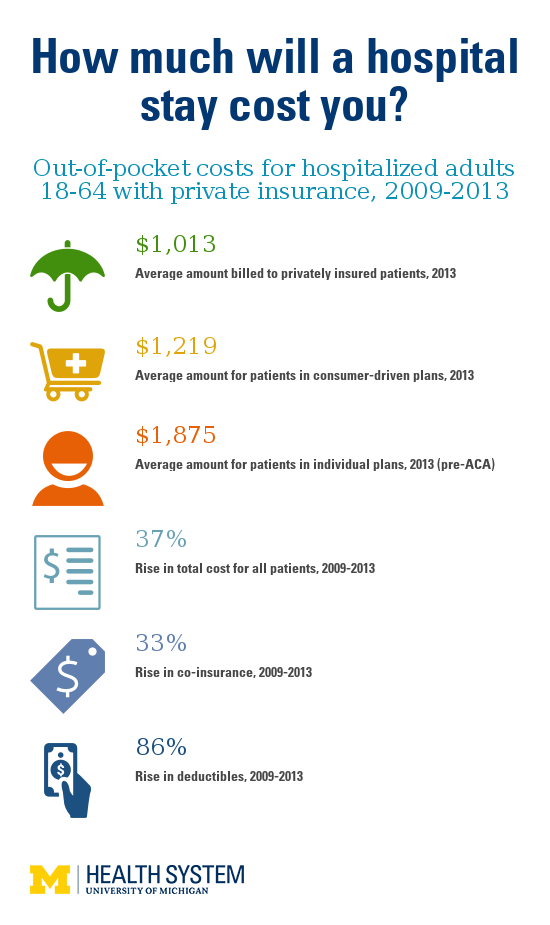 ANN ARBOR—Even if you have what you might think of as good health insurance, your next hospital stay could cost more than $1,000 out of your pocket.

And that amount has gone up sharply in recent years, rising more than 37 percent just for straightforward hospital stays for common conditions, say University of Michigan researchers.

Those striking statistics come from the first published analysis of actual out-of-pocket spending by people with private health insurance, most of it provided by employers. The study appears in JAMA Internal Medicine.

To see the rise in costs paid by privately insured hospital patients, researchers at the U-M Institute for Healthcare Policy and Innovation looked at data from more than 50 million Americans over a four-year period.

All of them had insurance plans offered by the three major companies that pool their data via the Health Care Cost Institute, of which IHPI is an academic partner.

The biggest change in out-of-pocket spending came from two types of insurance plan charges: one that patients are familiar with, the other…not so much.

“These results open up the ‘black box’ of health care and show all the costs of hospitalization that are billed to people with private insurance. For many, these may appear to be ‘hidden costs’ that they didn’t realize they would owe,” said first author Emily Adrion, a research fellow with the U-M Center for Healthcare Outcomes and Policy. “It shows that even people with the most comprehensive insurance are paying thousands of dollars, at a time when they need hospital care and may not have time to shop around.”

High costs, high variation
The study looked at costs billed to people between ages 18 and 64 from 2009 to 2013. In addition to a broad-based analysis, the researchers took a closer look at those who had heart attacks, pneumonia, appendicitis, heart bypasses, total knee replacements or spinal fusion procedures, and women who gave birth.

It’s different from other studies that have estimated out-of-pocket spending based on the design of insurance plans, the researchers say.

The percentage of patients who were charged deductibles and coinsurance rose by more than five percentage points during the study period.

Copayments, which are different from coinsurance and are a kind of ‘entry fee’ to a hospitalization, actually fell during this time. But this was due to the fact that fewer insurance plans charged a copay for a hospital stay in 2013 than had charged one in 2009—not to an actual drop in the dollar amount of the copays charged to patients who owed one.

The study also reveals sharp differences in out-of-pocket costs for people who chose “consumer-directed” health plans offered by their employers, which often take the smallest bite out of each paycheck, and for people who bought individual private plans during the study period.

For those with consumer-directed plans, the total they owed after a straightforward hospital stay topped $1,200, on average. Their employer may have also offered them a way to save pre-tax dollars in a special account to help pay for that, but the study data don’t show that.

For those with individual private plans, the bite was even harsher: $1,800, on average. Adrion notes that in order to qualify for an individual private plan during the study period, patients would have to have met standards for good health. A provision mandating that plans cover all adults regardless of pre-existing conditions didn’t take effect until 2014.

“These results show the importance of reading the fine print when you choose a health insurance plan, and being prepared to spend more out of your own pocket after a hospitalization than you might have expected,” said Nallamothu, U-M professor of internal medicine and IHPI member.

Patients can also make sure they understand which hospitals and doctors are “in network” for their plan, which might mean lower coinsurance costs. And, for people who can’t pay their entire bill at once, or at all, it means talking to the hospital about a payment plan or even a write-off of some costs under their charity care policy.

Coming next: Looking at post-ACA trends
The study period did not include private individual and family plans bought on the exchanges set up under the Affordable Care Act. Those plans began covering people in January 2014 and are open to anyone regardless of their health status. The study period did include the first years when the ACA mandated that adults up to age 26 could remain on their parents’ private health plans.

Recent estimates by the Kaiser Family Foundation suggest that the trend seen in these data has continued. According to a recent KFF report, 81 percent of people who get insurance through an employer have an annual deductible of about $1,300, and more than two-thirds of them also have coinsurance as part of their coverage. An even greater percentage of people who bought “silver” plans on an ACA exchange also have coinsurance provisions in their plans.

But plans bought on the ACA exchanges (including healthcare.gov) come with a federal cap on out-of-pocket spending of $6,800. Plans provided by employers, or bought individually outside the exchanges, don’t have such a cap. Adrion and her colleagues plan to study future HCCI data to look at spending trends.

The study was funded in part by the Agency for Healthcare Research and Quality (HS000053), and by IHPI funding from the U-M Medical School which allows for participation in HCCI.