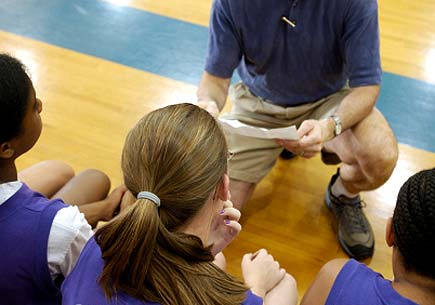 ANN ARBOR—While opportunities for girls to participate in high school sports increased during the 1990s, progress toward gender equity slowed and, perhaps, even reversed direction during the 2000s, according to a new report.

The report, released today by the Sport, Health and Activity Research and Policy Center for Women and Girls (SHARP)—a collaboration between the University of Michigan and Women’s Sports Foundation—provides insight into the state of high school athletics and the inequalities in the U.S. public school system, despite the passing of the landmark legislation, Title IX, 40 years ago.

Key findings from the report include:

“In the wake of the 2012 London Olympic and Paralympic Games, the state of women’s sports in the U.S. has generated great praise, and many believe that girls and women have finally achieved athletic equality,” said Women’s Sports Foundation CEO Kathryn Olson. “However, these findings suggest that we simply aren’t there yet. In fact, we are moving farther and farther away from equality with the cutting of interscholastic sports.”

Olson said that sports are an integral part of the educational experience and that students who participate in sports are shown to achieve greater academic success.

“One of the priorities of the SHARP Center is to uncover trends in access to participation opportunities in sport and physical activities for women and girls,” said Kathy Babiak, SHARP co-director and associate professor of sport management at the U-M’s School of Kinesiology. “SHARP’s Decade of Decline report demonstrates through a rigorous analysis of longitudinal data that inequities still exist in opportunities and access to sport for girls in high school.

“The matter of equity for girls in sport is of significant importance, and the SHARP Center will continue to work on this area in the future. We intend use our findings to support policy and advocacy to enhance access to sport and physical activity for women and girls.”

Through this benchmark study, SHARP hopes to inform and educate policymakers on the importance of ensuring that athletic opportunities are readily available to youth at the high school level, she said.

The Women’s Sports Foundation worked with the National Women’s Law Center to create relevant, evidence-based policy recommendations based on the report’s findings:

For detailed results of “The Decade of Decline: Gender Equity in High School Sports” and to access the complete policy recommendations, visit www.SHARPCenter.org.

SHARP was established in 2010 as a new partnership between the Women’s Sports Foundation and University of Michigan’s School of Kinesiology and Institute for Research on Women & Gender. SHARP’s mission is to lead research that enhances the scope, experience and sustainability of participation in sport, play and movement for women and girls. Leveraging the research leadership of the University of Michigan with the policy and programming expertise of the Women’s Sports Foundation, findings from SHARP research will better inform public engagement, advocacy and implementation to enable more women and girls to be active, healthy and successful.