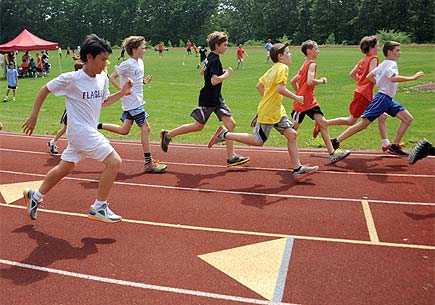 ANN ARBOR—If high school administrators want to create a positive environment, they should encourage students to participate in sports.

When high schools have strong interscholastic sports participation rates, they report lower levels of major crime and fewer suspensions, according to a new University of Michigan study.

The research includes violent behavior and attempted rape among major crimes, and suspensions involving five or more days out of school.

“Sport participation opportunities within a school might operate to slow down or stop more major forms of delinquency within a school environment from occurring,” said Philip Veliz, a postdoctoral fellow at the U-M Substance Abuse Research Center and the study’s lead author.

He co-wrote the research with Sohaila Shakib, an associate professor of sociology at California State University-Dominguez Hills.

The suspension rates also were reduced in schools with more sports participation opportunities, but this could be related to violent crimes being more likely to result in a long-term suspension, Veliz said.

Sports participation, however, did not affect whether students were involved in minor violations, such as property crime, possession or distribution of illegal substances, and possession of a weapon within high school.

Researchers sampled nearly 1,200 public high schools to determine the relationship between school sports participation rates and in-school delinquent behaviors. The average total crime incidence rates among high schools during the 2003-2004 and 2005-2006 school years were .039 and .042, respectively. In other words, about 4 percent of the student population was involved in a crime during these academic school years. For serious crimes, the rate was 1.6 percent during the same periods, while it was about 2.4 percent for minor crimes. The suspension rate was about 2.2 percent.

The athletic participation rate was 39.8 percent in 2003-2004 school year, and 42.4 percent during 2005-2006 school year. The results for this study found that schools with higher sport participation rates had lower serious crime rates and suspensions while controlling for a host of school characteristics, such as location and student-teacher ratio.

The findings appear in the current issue of Sociological Spectrum. To view the study, visit http://www.tandfonline.com/toc/usls20/current