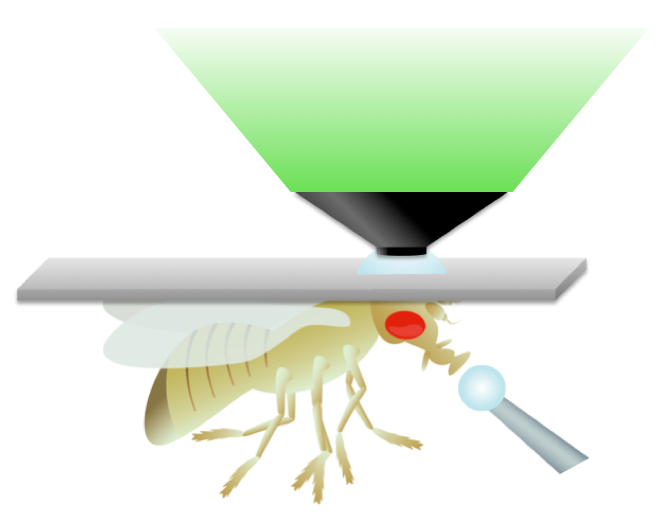 This image shows how the researchers prepare fruit flies for imaging. Image credit: Christina May and Monica Dus

ANN ARBOR—Everyone knows it: An entire box of Girl Scout cookies counts as one serving, right?

That’s at least how it feels, and a University of Michigan study in fruit flies finds why this might be: a high-sugar diet muddies the neural circuit that allows you to feel the sensation of satiety and causes you to overeat.

The underside of a fruit fly when the researchers image it. The fly is kicking its legs; it is alive and able to taste what the researchers feed it. Image credit: Christina May and Monica Dus

“Think of a very complex and strong-tasting food—for example, gorgonzola cheese,” said Monica Dus, lead investigator of the U-M study published in the journal eLife. “The pungent and penetrating flavor of this cheese is what makes it much harder to eat in bigger amounts compared to, say, mozzarella.”

Neural pathways that travel from the mouth to the brain are unique across organisms, said Dus, a professor of molecular, cellular and developmental biology. But the neural circuits within the brain that use the neurotransmitter dopamine to process the sweet taste of sugar are similar in humans, rodents and flies. She studies the effect sugar has on these neural circuits in fruit flies.

In the study, graduate student Christina May bred a genetic marker into the dopaminergic neurons of fruit flies that allowed her to see whether they were responding more or less to sugar. The Dus lab found that when fruit flies are fed a high-sugar diet, the response of neurons that signal reward in the brain was decreased and delayed. This leads to the fruit flies overeating.

To study if the lower activity of these neurons to sugar made the flies eat more, the researchers bred a molecule into the dopaminergic neurons of the flies that can be activated using red light. 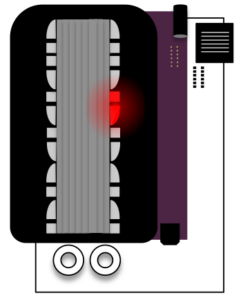 This is a cartoon of the optoFLIC device, with one arena lit up in red as though a fly is feeding. Image credit: Christina May and Monica Dus

When they shone light on the flies on the high-sugar diet, the dopaminergic neurons get activated to the same levels as the healthy diet animals, which makes these flies actually ate the equivalent of just one cookie even if they had access to the whole box. But without that red light activation, the sugar in the food weakened the flies’ feeling of satiety and they kept eating for hours longer.

“On a high-sugar diet, we find that the fruit flies’ dopaminergic neurons are less active, because the high sugar intake decreases the intensity of the sweetness signal that comes from the mouth,” Dus said. “Animals use this feedback from dopamine to make predictions about how rewarding or filling a food will be. In the high-sugar diet flies, this process is broken—they get less dopamine neuron activation and so end up eating more than they need, which over time makes them gain weight.”

This suggested to the researchers that the flies who were actually eating sugar were experiencing a dulled reaction to the sugar and no longer had the satiety cues to let them know they had eaten enough. As a result, the flies grew fat.

“These results mean we actually can start to create a theory of how a fly decides to stop feeding during a meal—which is remarkably similar to how we humans do—by guessing the amount of energy they’ve consumed using their taste,” May said. “It’s pretty impressive, given that flies and humans seem so different. But we both like (love) to eat sugar and we both try to stop ourselves from eating too much, in the same way.”

The Dus lab also found that the phenomenon was reversible. The researchers found that correcting the activity of sweet taste cells—getting fruit flies off the high-sugar diet—normalized the response of these neurons to sugar. The dopaminergic neurons are less active because the taste cells don’t work as well in animals with a high-sugar diet. This lowered activity means less of the “feel good” feeling from dopamine and less satiety from sugar.

The process is somewhat similar to drug addiction, Dus says. Sugar lights up the same reward centers in the brain. As more and more sugar lands on your tongue, the sensitivity of the reward centers linked to the tongue declines and the centers may require more sugar to experience the same “high.”

“We think that essentially this processing of sweetness in the dopaminergic neurons is probably used as a cue, as an alarm to tell the brain to start slowing down,” Dus said. “If that process is not there anymore, then you have to wait for other cues to tell you that you’re full. By that time, you’ve already eaten a lot of cookies.”