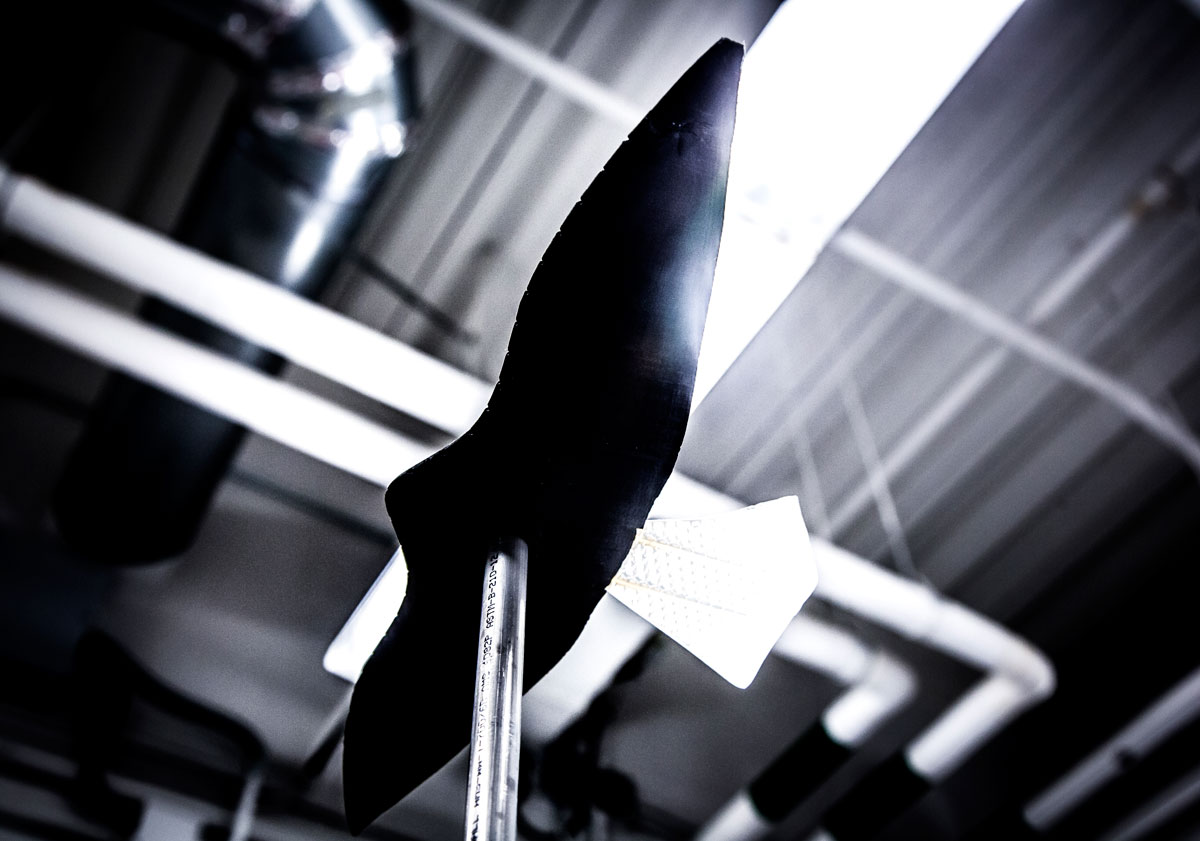 This model of an airplane wing changes its shape using materials that react to electrical current. Credit: Joseph Xu, Michigan Engineering Communications & MarketingANN ARBOR—An international team of engineers and biologists will gain unprecedented insights into how birds fly so efficiently and then turn that knowledge to building unmanned aircraft with shapeshifting wings.

These planes should be lighter, faster and dramatically more maneuverable than today’s stiff-winged aircraft.

Recently awarded a $6 million grant from the Air Force Office of Scientific Research, the researchers will first produce the most detailed analysis of bird flight ever made for an aerospace engineering project. The project is headed by Daniel Inman, professor of aerospace engineering at the University of Michigan, with researchers at Stanford and the UCLA leading parts of the effort.

While modern, rigid-wing airplanes use drag-inducing flaps and slats for control, birds manipulate individual feathers or clusters of feathers on their wings, creating surfaces that control flight without wasting energy.

“With new materials, advanced sensing and control techniques, and inventive methods for observing birds in flight, our team will begin to bring avian efficiency and agility to aircraft,” Inman said.

Better efficiency will make battery-powered unmanned aircraft more practical, whereas many now rely on fossil fuels. The team will also explore whether their new wings and tail could work on small, crewed aircraft.

Rather than burdening small birds with sensors to measure airflow, pressure and other forces, David Lentink, an assistant professor of mechanical engineering at Stanford University, has developed a system that measures pressure disturbances in the air around the bird.

“It is really exciting that we can now finally study bird flight with an engineering eye,” said Lentink, who is also a biologist. “The time-resolved forces on the wings, in combination with 3D wing shape measurements at 1,000 frames per second, are key to deciphering how birds change shape to control the aerodynamic force they generate.”

Other biologists on the project will mount cameras on the backs of large species such as eagles. These will provide close-up views of the wings as the birds take off, glide, maneuver and land. A third group will explore how wing muscles work together to manipulate the shape of the wing.

The engineers will investigate a variety of avenues toward producing morphing wings for aircraft. They’ll test materials that alter wing shape in response to stimuli such as temperature changes or electric current. The researchers believe they can assemble structures resembling the bone and muscle in birds wings through 3D printing.

To regulate the shapes of the wings, another group of engineers will program the control computer using techniques that mimic neurons in the brain and develop sensors that can be distributed through the wing like nerves. These will report airflow and pressure data back to the computer—information that birds instinctively collect and use in flight.

“A biological neural network can process signals at a speed comparable to a supercomputer while weighing only one millionth as much and consuming one millionth the power,” said Yong Chen, professor of mechanical and aerospace engineering at the UCLA.

Chen’s brain-like circuits will be able to quickly and efficiently process information from the sensors, using it to choose the best wing shapes to maneuver the aircraft.

The engineering team includes Darren Hartl, research assistant professor in aerospace engineering at Texas A&M, who will develop components for changing the wing shape using shape memory alloys. Inman and Henry Sodano, associate professor of aerospace engineering at U-M, will explore new materials and ways to structure the wings. Fu-Kuo Chang, professor of aeronautics and astronautics at Stanford, will build distributed sensing systems for the wings, working closely with Chen.

Douglas Altshuler, an associate professor of zoology at the University of British Columbia in Canada, will study tactile feedback in birds and work with Lentink on the analysis of bird flight. Richard Bomphrey, a reader in biomechanics at the Royal Veterinary College in the U.K., will use cameras to investigate how birds alter the shapes of their wings to control flight. Graham Taylor, professor of mathematical biology at Oxford University, will provide data that he previously collected on bird flight.