HoloLens2 for Nursing: ‘Hands-on’ learning during pandemic and beyond

As higher education grapples with how to deliver education during the pandemic, there are some courses of study that don’t lend themselves easily to online learning.

The discipline of nursing is one, but faculty in the school known for being at the leading edge of teaching hands-on skills have found a high-tech solution that will be useful for the pandemic and beyond.

The University of Michigan School of Nursing has one of the most technologically advanced programs around with its Clinical Learning Center, yet leadership in the school wrestled with how to teach hundreds of students the hands-on nursing skills and procedures required to advance in the program, while following COVID-19 guidelines for social distancing and university calls to minimize in-person courses.

“We were bustling then all of a sudden March 17 hit and we had to send everyone home. We had no idea how we were going to train students on procedures,” said Deborah Lee, clinical assistant professor of nursing and co-director and graduate faculty lead at the center. “We came across the HoloLens2 and realized we could do augmented reality with students, potentially even from home.”

The school reached out to leaders at the Center for Academic Innovation XR Initiative who put them in touch with Microsoft, developers of the Oculus Quest HoloLens2 technology.

Nursing student Charles Lennes helped Lee and Melissa Bathish, clinical assistant professor and center co-director and undergraduate faculty lead, test the tool. The junior who works as a nursing assistant at Michigan Medicine had already been through the urinary catheterization training that was one of the first modules created, so Bathish and Lee asked him to try it out and offer feedback.

Lennes said typically a procedure like this would be demonstrated by an instructor to about eight students, who would be handed a sheet with step-by-step instructions to practice the procedure before being tested.

“A lot of people get to sophomore year and they start with these new skills. They are in the lab for the first time doing simulations and they have to do this catheter, which is a very hard skill— lots of steps—and they just freeze and they can’t do it,” Lennes said.

“And a lot of people think ‘maybe this isn’t for me,’ and have this doubt planted in their minds. If we can prevent that and get them confident with those really basic skills, then going into junior and senior year they will continue being really confident.” 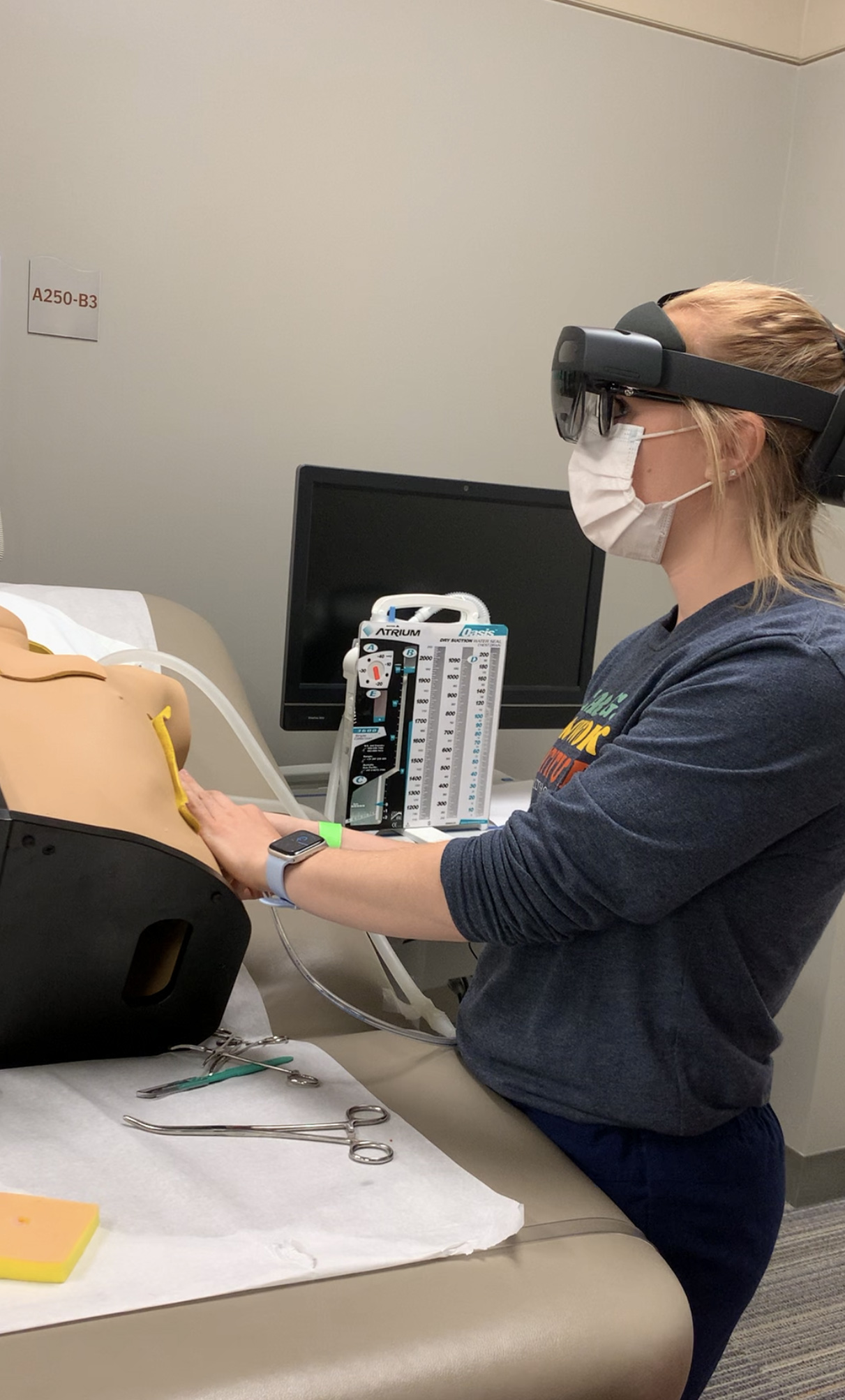 The students still get instructor demonstrations but then they can use the technology to go through it as many times and as slowly as needed.

How it works: A student in one of the simulation labs at the bedside of a mannequin puts on a headset—the HoloLens2—and walks through the procedure. A series of steps appears on a screen, including mini demonstration videos and reminders about precautions, like maintaining a sterile environment. The student’s eyes guide him or her through the procedure and change what is seen on screen.

Graduate student Julie Ramus also tried out the HoloLens2 Guide to offer feedback from the point of view of an instructor in an open lab at the Clinical Learning Center. A nurse at Karmanos Cancer Center, who is at U-M earning a doctorate of nursing practice, Ramus knows students have many questions.

“I really like how there are videos off to the side for students who may have a lot of questions about a procedure before they proceed to be tested,” Ramus said, adding it could help students solidify skills.

“For me, there were times I got nervous about doing something wrong, about harming someone. Instructors can only donate so much time to students. With this tool they can independently continue to practice the skill over and over again themselves.”

So far, the school has developed three trainings and plans to do as many as 50 within the next year or so. Bathish and Lee have been trained on use of the technology and are excited to move forward. Nursing purchased two of the HoloLens2 devices at $3,500 each but they hope to acquire more.

While the school sought a solution for the possibility of having to move instruction online, and for having to temporarily limit student access to the open labs due to a staggered schedule and reduced populations forced by COVID-19, they found it could be useful beyond the current situation.

“I think it is going to enhance and standardize our training. I believe that it is going to help with remediation and safety checks thus improving performance of foundational skills and procedures,” Bathish said. “We can put the HoloLens2 on a student and the faculty can dial in to watch the student do the procedure. So, it will create more flexibility for faculty and for nursing students that because of COVID or another reason can’t come to the school.”

Lee said it also has possibilities for someone who has been in the profession but may want to change specialties or units in a health care setting. For example, she said, someone who had not done wound care in some time could refresh skills using the tool. 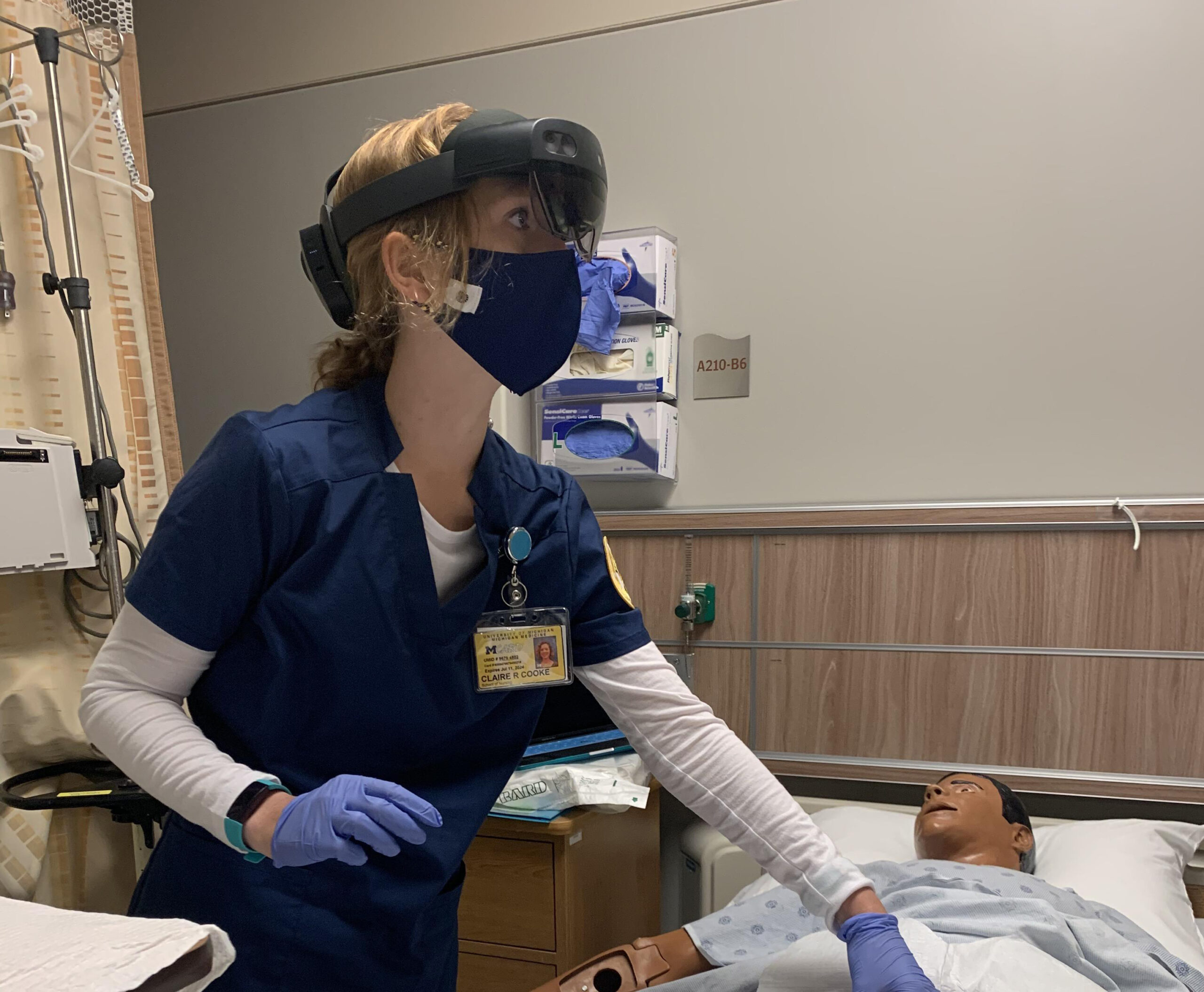 Nursing sophomore Claire Cooke, who like Lennes had already learned the catheterization procedure, was excited to give the HoloLens2 a try.

“When I first put it on it was like, ‘Whoa, there’s something that nobody else can see, but I can see.’ I moved my head and it all moved along with me. I don’t know what I looked like from other people’s perspective, looking at a screen, moving my head and staring at a wall, but it was really cool,” Cooke said.

“Going to Michigan there are so many possibilities to try out different things. I’m surprised but at the same time not surprised because of Michigan and how they work. Compared to other schools, we definitely have advanced technology when it comes to teaching, and if we do add on the augmented reality that will put us way above.”