Those estimates come from a new University of Michigan study of 93 million American homes. It is the most comprehensive study of U.S. residential greenhouse gas emissions, according to the authors, and the first to provide nationwide rankings by state and zip code. It is also the first nationwide study to find correlations between affluence, residential floor space and greenhouse gas emissions, they say.

In addition, the U-M researchers determined that the U.S. residential housing sector won’t be able to meet the Paris climate agreement’s 2050 emissions-reduction targets solely by phasing out fossil fuels in electricity generation. In-home fuel burning and electricity consumption must also be reduced. New homes will have to be smaller, and denser settlement patterns will be needed.

A paper summarizing the study’s findings is scheduled for publication July 20 in the journal Proceedings of the National Academy of Sciences. 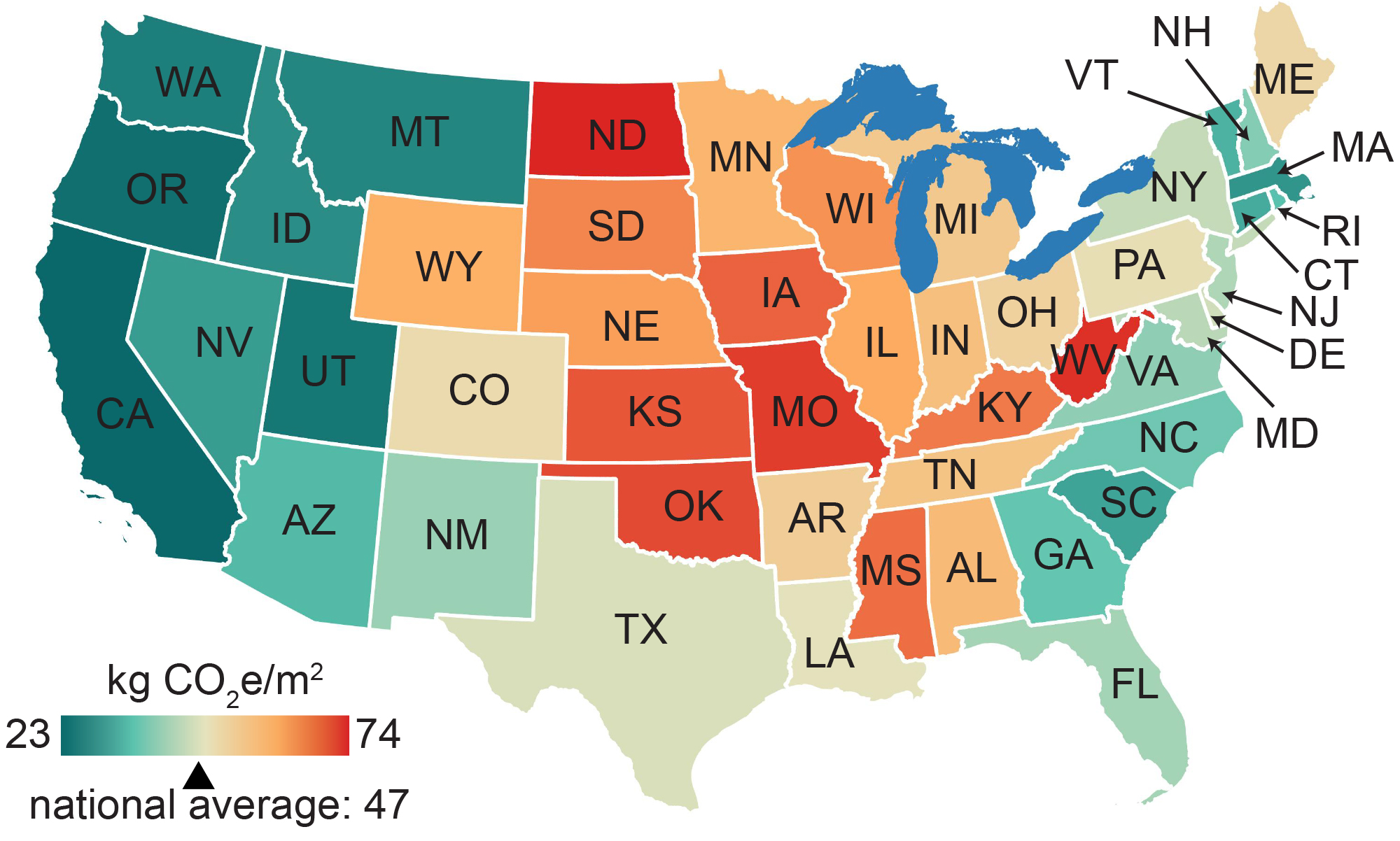 Greenhouse gas intensity of U.S. homes in 2015 by state. Household GHG intensity is a measure of the emissions per square meter of residential floor space and takes into consideration the types of fuels used to generate electricity at a given location. Emissions are expressed in kilograms of carbon dioxide equivalents per square meter (kg CO2-e/m2). Image credit: Benjamin Goldstein, from Goldstein et al. in PNAS (2020)

“Residential energy use accounts for roughly 20% of greenhouse gas emissions in the United States,” said study lead author Benjamin Goldstein, a postdoctoral research fellow at U-M’s School for Environment and Sustainability and at the Erb Institute.

“Although houses are becoming more energy efficient, U.S. household energy use and related greenhouse gas emissions are not shrinking, and this lack of progress undermines the substantial emissions reductions needed to mitigate climate change,” he said.

Although houses are becoming more energy efficient, U.S. household energy use and related greenhouse gas emissions are not shrinking, and this lack of progress undermines the substantial emissions reductions needed to mitigate climate change

“Despite the urgency, fundamental questions remain unanswered about U.S. household energy emissions. For example, researchers have lacked the nationwide building-level data necessary to identify the states with the most energy- and carbon-intensive housing stocks.”

To help answer some of these questions, Goldstein and his colleagues used data at the building level to estimate the residential greenhouse gas emissions of about 93 million homes in the contiguous United States—78% of the national total.

Household “greenhouse gas intensity” is a measure of the emissions per square meter of residential floor space and takes into consideration the types of fuels used to generate electricity at a given location.

The team’s state-by-state rankings show that GHG intensity is lowest in the West and highest in the central United States. Regional variations were driven mainly by the amount of energy needed to heat and cool homes and by the type of fuel used to generate electricity.

The U-M researchers found that greenhouse gas-intensive electricity production can erase the benefits of low household energy intensity. Also, states with extensive use of carbon-intensive home heating fuels—such as Maine, where two-thirds of households are heated with fuel oil—diminish the benefits of low-carbon electrical grids.

In their study, the researchers also estimated per capita household energy emissions for 8,858 zip codes across the country.

The zip code-level analysis showed that income is positively correlated with both per capita energy use and emissions, along with a tendency for wealth and living area to increase together. Wealthier Americans have estimated per capita carbon footprints about 25% higher than those of lower-income residents, with emissions up to 15 times higher in especially affluent suburbs.

One section of the study compared the Boston and Los Angeles areas to see how the interplay of income, building type and energy infrastructure distribute greenhouse gas emissions across urban landscapes. In both cities, the high-emissions neighborhoods were primarily high-income or extremely high-income locations. In contrast, more than half of the lowest-emissions neighborhoods in both cities were home to residents living below the poverty threshold.

The study’s findings suggest two interventions to mitigate greenhouse gas emissions tied to U.S. residential energy use: 1) reducing fossil fuel use in homes and in electrical generation and 2) using home retrofits to cut energy demand and in-home fuel use.

As part of their study, the U-M researchers modeled four scenarios to test if various technology transitions—such as decarbonization of electrical grids and home energy retrofits—could enable the United States to meet 2025 and 2050 residential-sector targets of the international Paris Agreement.

The researchers concluded that if the U.S. electrical grid is decarbonized, meaning that fossil fuels are phased out, then the residential housing sector can meet the 28% emission-reduction target for 2025 under the Paris Agreement.

However, meeting the 2050 Paris Agreement target of an 80% emissions reduction would require more: aggressive home energy retrofits and a transition to low-carbon residential energy sources, as well as a move toward smaller U.S. homes and denser settlement patterns, the researchers concluded.

In November 2019, the Trump administration formally notified the United Nations that the U.S. is withdrawing from the Paris climate agreement.

“The scenarios also suggest that making new construction low-carbon will require smaller homes, which can be promoted through denser settlement patterns,” he said.

The PNAS paper is titled “The Carbon Footprint of Household Energy Use in the United States,” www.pnas.org/cgi/doi/10.1073/pnas.1922205117. The other author is Dimitrios Gounaridis of the U-M School for Environment and Sustainability. Financial support for the work was provided by the National Science Foundation through its Environmental Sustainability program.