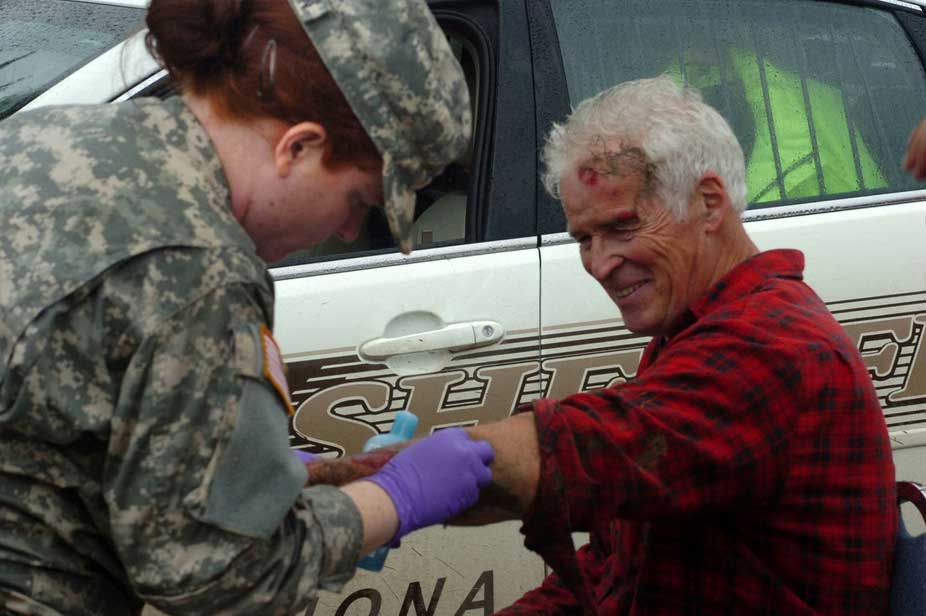 ANN ARBOR—Older adults may still be checking into hospitals for weeks after a natural disaster, past the the expected three days of anticipated injuries and health issues, a new University of Michigan study shows.

The study found that in the 30 days after a rash of tornadoes swept through the U.S. Southeast and Midwest in 2011, hospital admissions for adults 65 and older rose an average of 4 percent in the swatch of affected zip codes in Alabama, Mississippi, Georgia and Tennessee.

When zip codes were analyzed by individual state, both hospitalizations and intensive care admissions jumped to 9 percent in Alabama, which saw the most tornadoes. Admissions didn’t increase significantly in the other three states.

The increases held true when researchers excluded the three days following the disaster, when hospitalizations would be expected to surge from immediate injuries, said principal investigator Sue Anne Bell, clinical associate professor at the U-M School of Nursing.

“It was obvious that these discrete severe events would cause trauma on the day or so after tornado touchdown,” Bell said. “It was not obvious, and had never been previously shown, that they caused hundreds of extra admissions in the weeks after the tornado.”

Older adults, she said, are a particularly vulnerable population because disasters are known to interrupt care for chronic health conditions. These people may also have frailty or mobility issues, or cognitive impairments, and the ability to bounce back after the disaster may not be the same as for a younger person.

The study results have implications for response and recovery, and hospital staffing after an emergency, Bell said. Federal guidelines require availability of 20 percent of all staffed beds within four hours after a disaster, and Bell said these findings support surge planning models with longer timeframes.

“The cost that hospitals incur and the effect on the community and manpower really lasts a lot longer than expected,” she said. “Hospitals and communities need to be considering this.”

Researchers analyzed Medicare claims for roughly 27,000 people and 57,000 hospitalizations after a rash of tornadoes in April 2011—considered one of the largest tornado-related natural disasters in U.S. history.

Eleven tornadoes ran through Alabama, which may account for the large jump in hospitalizations and ICU admissions there, Bell said. Four tornadoes touched down in Georgia and Tennessee and three in Mississippi.

On average, there were 5,028 hospital admissions in those zip codes during the 30 days after, compared to 4,712 hospitalizations per 30 days the rest of the year. When researchers conducted the same analysis in areas of Alabama and Georgia untouched by the storm, hospitalizations remained constant and didn’t increase.

The next step is to use the same type of analysis to see what role existing chronic disease and socioeconomic factors play in hospitalizations after a disaster, Bell said.

Bell and her co-authors Mahshid Abir, Colin Cooke, Theodore Iwashyna and HwaJung Choi are members of the U-M Institute for Healthcare Policy and Innovation. The research was supported by the National Clinicians Scholars Program.

The study, “All-cause hospital admissions among older adults after a natural disaster,” appeared this month online in the Annals of Emergency Medicine.