House of straw: A new face of sustainability on campus

ANN ARBOR—Three students are working with a set of donated DeWalt tools. They are siting and squaring the foundation for a building, and they’re trying to figure out how the devices work.

Soon, the young men have a rectangular outline marked off using twine and stakes. They watch their instructor, Joe Trumpey, an associate professor at the Penny W. Stamps School of Art & Design, drive up in a rented excavator. He starts digging into the earth.

It’s the first day of a month-ish long build. Trumpey’s class is the second of a group of 25 (mostly) inexperienced college students that he has led in building a straw bale building. The structure is an example of sustainable building, and will be made of 18-inch-thick straw bales, sitting atop a concrete foundation and sheathed in layers of adobe. Solar panels will sit atop the building’s metal roof, making it the first off-the-grid building on the Ann Arbor campus. It’s also the University of Michigan’s first student-built structure on the main campus.

Trumpey and his class built its sibling last year at U-M’s Biological Station in Pellston, Mich. Here in Ann Arbor, the building is situated among fields of vegetables and hoop houses on the student-run U-M Campus Farm at Matthaei Botanical Gardens.

The structure will anchor the farm, providing a meeting place for farm-to-table dinners hosted by Michigan Dining, which provides food service to U-M’s residence halls, cafés and markets across campus. It will provide a home for the annual fall festival held there by the U-M Sustainable Food Program. It will also simply be a place where student farmers can say, “Hey, meet you at the straw bale building,” before they start their volunteer work days planting, harvesting and tending crops.

But the beauty of it all? The building is almost entirely built by students, for students.

“The most important thing about this project the outside-the-classroom experience, the hands-on of learning skills as opposed to knowledge,” said soon-to-be-junior Kristen Hayden. “Just knowing you can do things for yourself—I can build my own house after this, you know?” 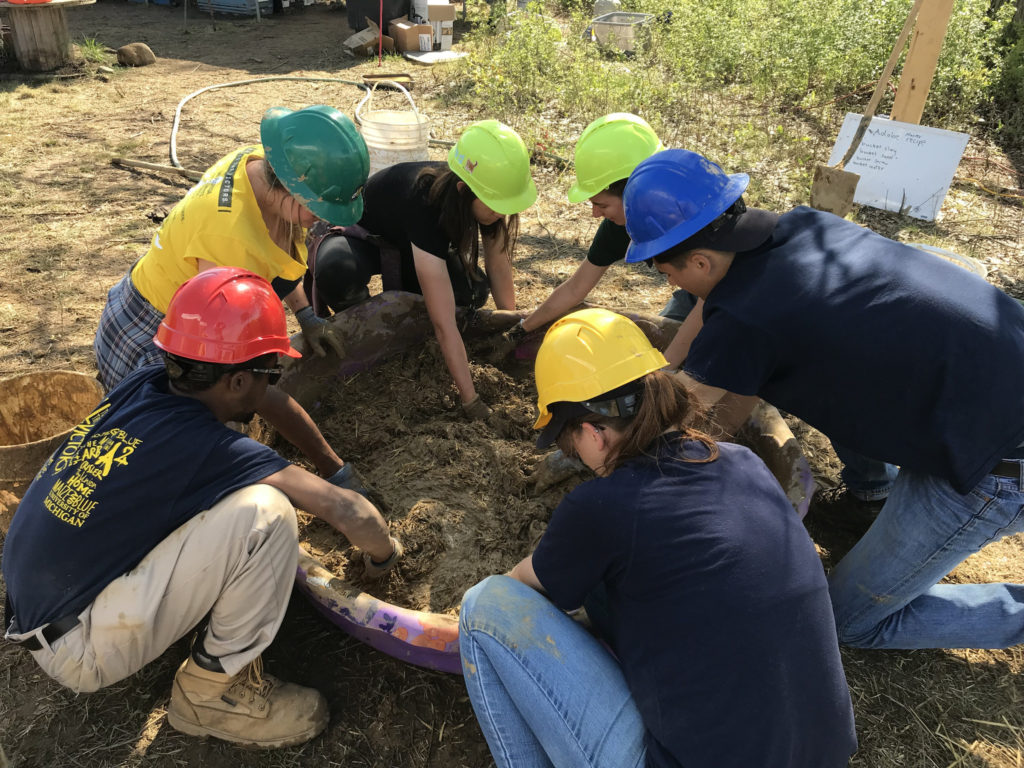 Students with Joe Trumpey’s Green Building class mix adobe for the straw bale building they built on the U-M Campus Farm at the Matthaei Botanical Gardens.

The students are part of Trumpey’s Green Building class, housed in the College of Literature, Science, and the Arts’ Program in the Environment. Students also hail from Stamps and Michigan Engineering. Trumpey draws from his own experience building and living in a 2,200-square-foot straw bale home near Grass Lake and more than a decade researching sustainable building methods.

“This was about taking what we learned in the Green Building pilot last year that was part of the Third Century grant at the biological station,” said Trumpey, who is also a professor at the U-M School for Environment and Sustainability. “How do we bring that here, where it could affect more lives and move the sustainability needle in Ann Arbor where it’s much, much more visible?”

His course introduces students to sustainable structures and teaches them to use their own hands to build them. Some of the timber used for the building was milled by the students from trees on the Ann Arbor campus felled by a windstorm. Straw for the bales was grown on a farm near Adrian, Mich., and clay for the adobe and gravel for the foundation came from a gravel pit in Jackson County.

“Building the strawbale building last year at the biostation was a great start, but bringing it to Ann Arbor this year attracts more people and will hopefully make them think more about what it means to have a sustainable lifestyle, and what sustainability means to them,” said Wendy Zhuo, a rising junior studying architecture. “I believe this building will bring awareness of not only what green building methods are but also new knowledge about sustainable farming and local food because of the Campus Farm.”

“Some of the philosophy about this building is art, and some of it is design,” Trumpey said. “One little straw bale building on campus isn’t going to fix climate change or U-M’s carbon footprint, but it can help make those issues more visible. Being able to have a conversation through an object, through a building made of straw and mud, can help us think about and gather together and work together toward these common goals of thinking about carbon emissions and carbon footprints.”

Bob Grese, director of the U-M Matthaei Botanical Gardens, says the sustainable structure is part of the ethos of the gardens and the arboretum.

“One of the aspects we loved about the project was that Joe was doing this as part of class and students were constructing the building,” Grese said. “We set a high priority on providing experiential learning for students—and it’s a demonstration of sustainability that students feel an investment in helping make happen.”

An anchor for a local food paradise

The straw bale building is well placed on the U-M Campus Farm, which, six or seven years ago, found a home at Matthaei Botanical Gardens as well. The building is nestled in a food forest, where a team of students previously planted hazelnuts, raspberries, serviceberries and blueberries. Its front porch opens south, facing the farm’s fields. West of the building are several passive solar hoop houses, which can grow food year-round.

The farm is still mostly run by student farm managers. But the farm has grown so much that Grese hired a manager to coordinate the student workers and student managers and to expand the farm as a living-learning lab for high-impact teaching, research and learning in sustainable food systems at U-M.

In the 18 months Jeremy Moghtader has been on the job, he’s overseen the building of the students’ hoop houses. The hoop houses allow students to grow vegetables, including cold-hardy spinach, year-round. With Grese and Trumpey, Moghtader also helped site the straw bale structure.

“The farm itself exists as a place to provide students opportunity to have these kinds of in-depth, hands-on educational experiences,” Moghtader said. “That’s all true of the broader extent of what happens at the gardens and arboretum. Bob (Grese) has been extremely engaging and accommodating and welcoming of student projects that have a hard time being sited other places on campus.”

Alex Bryan, manager of the U-M Sustainable Food Program, worked with Trumpey, Grese and Moghtader as well to help find a home and a purpose for the straw bale building. His position, nested within MDining, has helped coordinate the purchase and use of the food produced at the farm to feed students throughout dining halls and cafés across campus. The program’s goal is to provide about $100,000 in food annually for the university.

“We’re continuing to provide good food, and working to make that better, and we’d like to live into the mission of the university and Student Life a bit more through student engagement, learning and leadership development. The straw bale project lets us put our hands in the sandbox and support student-driven initiatives,” Bryan said.

“Right now, MDining is purchasing most everything the farm grows. It’s a really cool narrative: students are growing food and harvesting it and putting it into the kitchen where students in dining halls throughout the university system are eating it. Having this building as an anchor point for the farm helps us achieve the goal of food from our farm to our table at Michigan.” 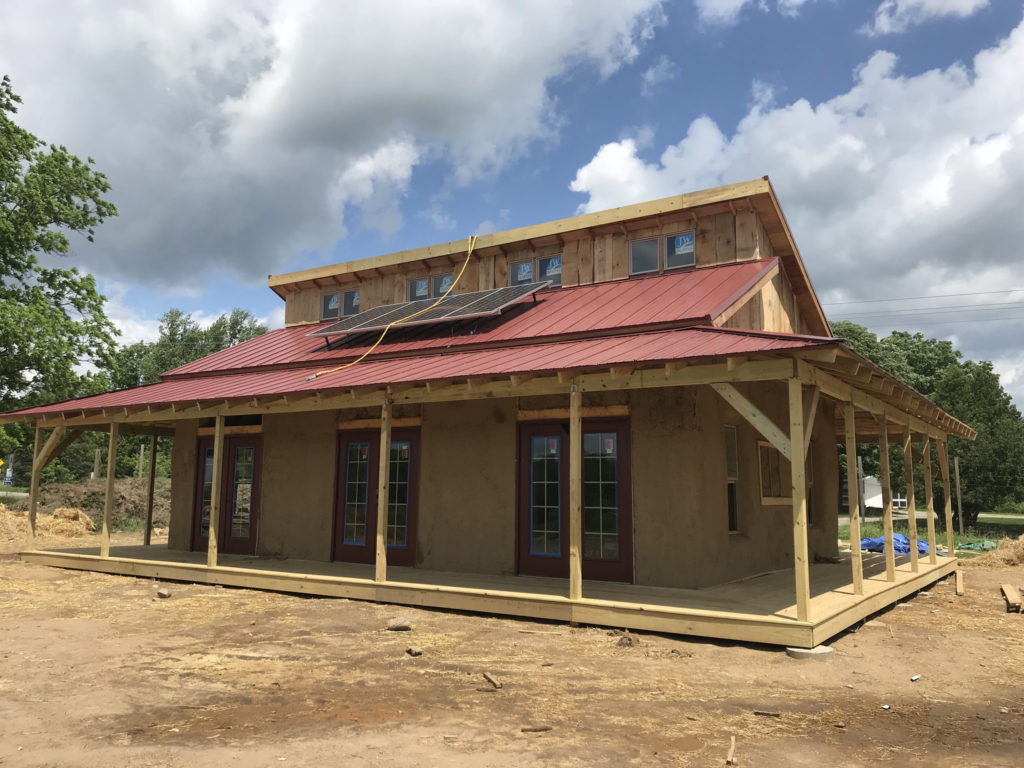 Despite some rain delays, University of Michigan students, led by Professor Joe Trumpey, recently completed the straw bale building at the U-M Campus Farm at the Matthaei Botanical Garden.

Toward the end of the build, the green building students picked spinach from the U-M Campus Farm fields. They carried the spinach to MDining staff, who had come for the day to work on the structure, and to put on a celebration barbeque for the class. It was a sort of inaugural event for the nearly finished building—one that felt important to rising junior Logan Vear.

“I’ve been involved in these different pockets of sustainability, and this has been a good way to bring it together. Joe’s brought everyone together like that—I feel like there are all of these missed connections because sustainability is such a big concept,” Vear said of the intersection between the Green Building class, Matthaei Botanical Gardens, the Campus Farm and MDining. “We’ve seen it all come together, and have seen those partnerships work really well. It’s been really incredible to see all those different steps.”

In the fall, the U-M Sustainable Food Program will host its annual harvest festival at the farm. Live music will intertwine with offerings of food grown on the very plots where the festival is held.

Other days at the farm will see farm-to-table events, with food grown by campus farmers and prepared by campus chefs.

And, at the center of it all, will be the straw bale building, powered by the Michigan sun and built by Michigan hands.

The current class project received funding from the Planet Blue Student Initiative Fund. It’s also supported by the Office of the Provost and MDining, which purchases produce from the student farm and plans to host farm-to-table events at the straw bale structure in the future. Electrical work was provided by Turner Electric. The class installed the solar panels, which were provided by a grant from Planet Blue Renewable Energy Demonstration Project Program.