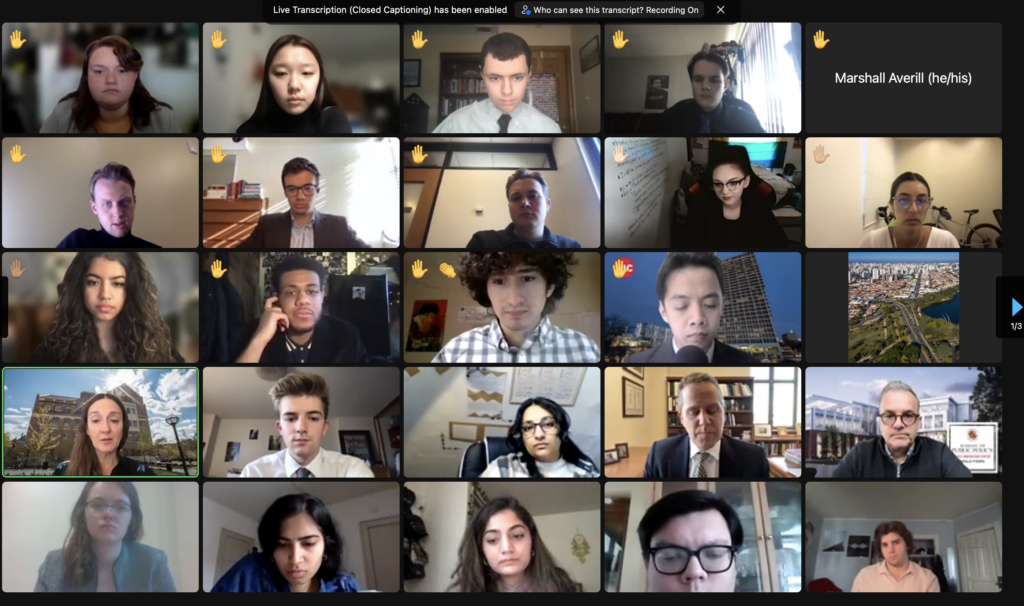 After a few hours of spirited discussion, the U.S. Senate passed the Vote at Home Act of 2021. Now, all eligible American voters will be able to cast a ballot by mail without having to provide a reason.

At least that’s what happened in three of the four committees of a virtual Big Ten policy simulation held in late January.

About 60 students from a dozen of the Big Ten schools came together to discuss voting rights and create legislation. The Vote at Home Act simulation is part of Democracy in the 21st Century, a conferencewide collaboration to develop educational programming that promotes active civic education and engagement. Sen. Amy Klobuchar, D-Minnesota, chair of the Senate Rules and Administration Committee, opened the simulation with a welcoming statement.

The students, divided into four committees, each played the role of an actual U.S. senator serving on the Senate Rules and Administration Committee—which is currently considering this bill. Three of the four cohorts approved the bill after adding amendments to make the bill more acceptable to the majority.

“I have differing political views than the senator I played,” Weng said. “The simulation helped me understand how challenging it is to have stakeholders and representatives of diverging views work together, and how antagonism and bad faith may lead to shared frustration.”

Weng highlighted the final negotiating phase when the Republican and Democratic senators met separately to build a bill they could all endorse.

“It was exciting and thrilling to see if we could put aside our ideological differences, which we, unfortunately, ultimately could not because we had structured our committee with partisanship baked in,” he said. 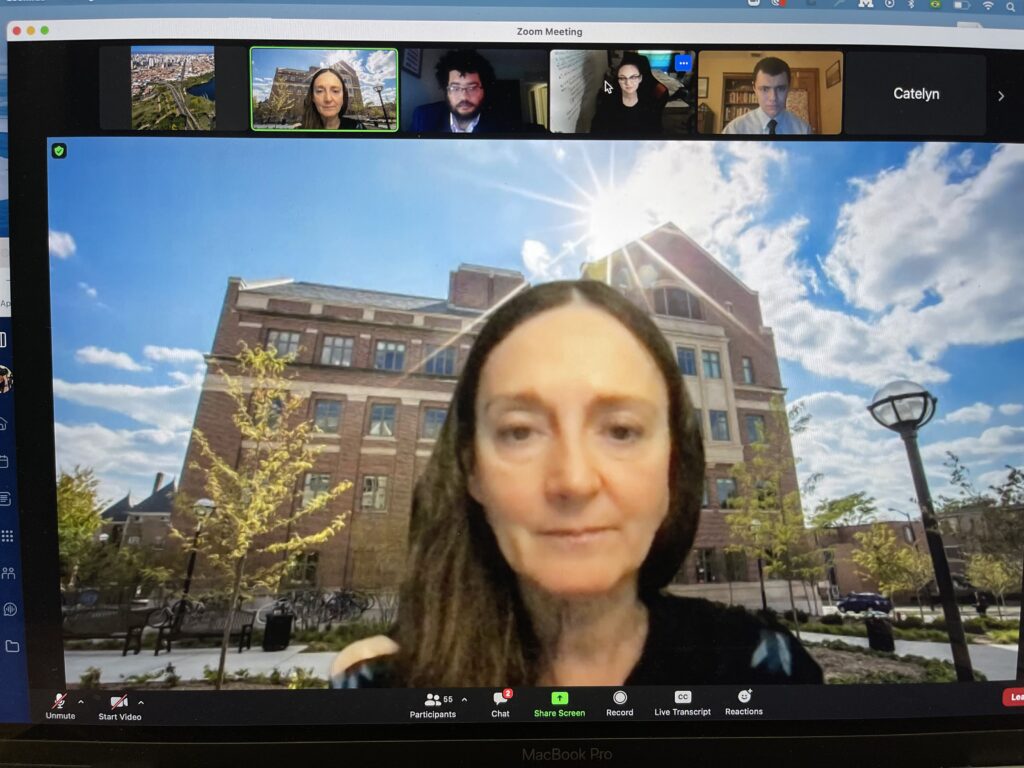 Elisabeth Gerber, professor at U-M’s Ford School of Public Policy, is the faculty founder of ViewPoint, the software platform students used in the educational role-play simulation. She explained that participants have to play their roles as authentically as possible.

“They have to put away their own identities, opinions and perspectives and immerse in the viewpoints of someone else,” Gerber said. “Some students played a senator with whom they strongly disagreed on voting access. Others had more similar positions.

“The goal was to help them experience how complicated it is for a bill to become law. There are numerous steps, including consideration by one or more committees, floor votes in both chambers, possibly reconciliation by a conference committee, and being signed by the president.”

Ohio State University student Sri Vidya Uppalapati said she had extensive experience on the bureaucratic and policy advising end and advocacy to legislators, but not in a purely legislative setting. She played Sen. Roy Blunt, the ranking member of the Rules Committee.

“Senator Blunt and I stand rather far apart on many issues, but the weight of responsibility both guiding the Republican caucus in the committee and the pressure to achieve bipartisan legislative success were new experiences,” Uppalapati said.

“Also, the simulation was interesting in its structure. Going into different groups and navigating varying motives with people I barely knew was an opportunity to hone my quick critical thinking and conflict resolution skills.”

Ford School Dean Michael Barr said it was “inspiring to see students from across the Big Ten working together to deepen our understanding of how to make progress on voting rights in these divisive times. I’m thrilled that the Ford School hosted this Big Ten policy simulation on voting rights and grateful for the leaders who developed the simulation.”

A master’s student at the University of Maryland, Mario Sto. Domingo, was one of four people who played Sen. Patrick Leahy, the senior Democratic senator and president pro tempore of the Senate.

“I agree with many of his policy positions, including on voting rights, so I had a relatively easy time with the role,” Sto. Domingo said. “However, it was interesting to see other students portray senators who they disagree with, which definitely made the discussion more contentious and thought-provoking.”

Students used the ViewPoint software platform to share information about their roles, communicate with other student participants, access resources and cast their votes for the simulation.

“This exercise has been a great opportunity for students to connect across the Big Ten and develop a richer understanding of different perspectives as they engage in the give and take of the legislative process,” said Robert Orr, dean of the University of Maryland School of Public Policy. “These are key objectives of the 21st Century Democracy Collaboration and we’re grateful to all the students and faculty who contributed to this important work.” 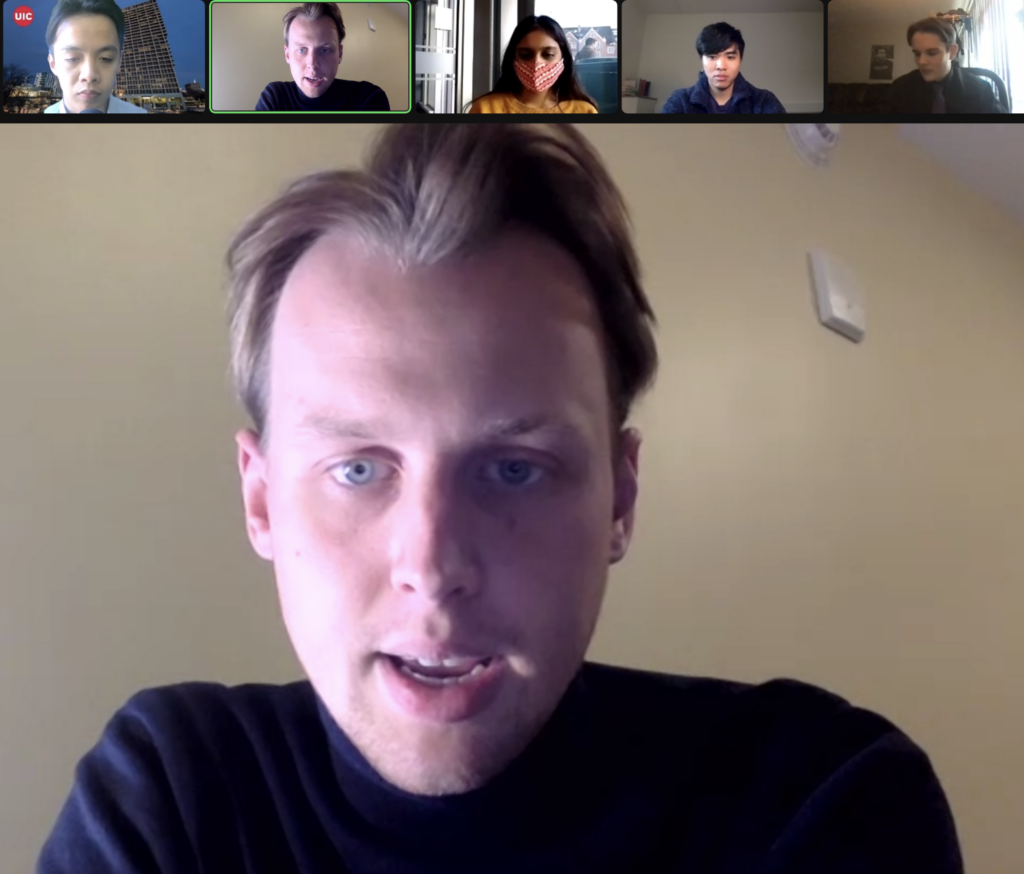 Christian Neubacher is a master’s student at Michigan’s Ford School of Public Policy, focusing his studies on international policy. He was Sen. Alex Padilla in the simulation, who has been highly engaged in proposing and developing voting rights legislation.

“Representing Senator Padilla made the simulation more straightforward than if I had represented a senator who was more ‘on-the-fence’ regarding the proposed legislation,” Neubacher said. “This meant that I had an obligation to push back at attempts to water down the proposal.

“In addition to improving my understanding about the policymaking process, the simulation helped me learn more about voting rights legislation and the debates currently underway about how to expand voting rights. Particularly engaging was being able to work with students from across the Big Ten, which allowed for many innovative ideas to be shared and discussed.”