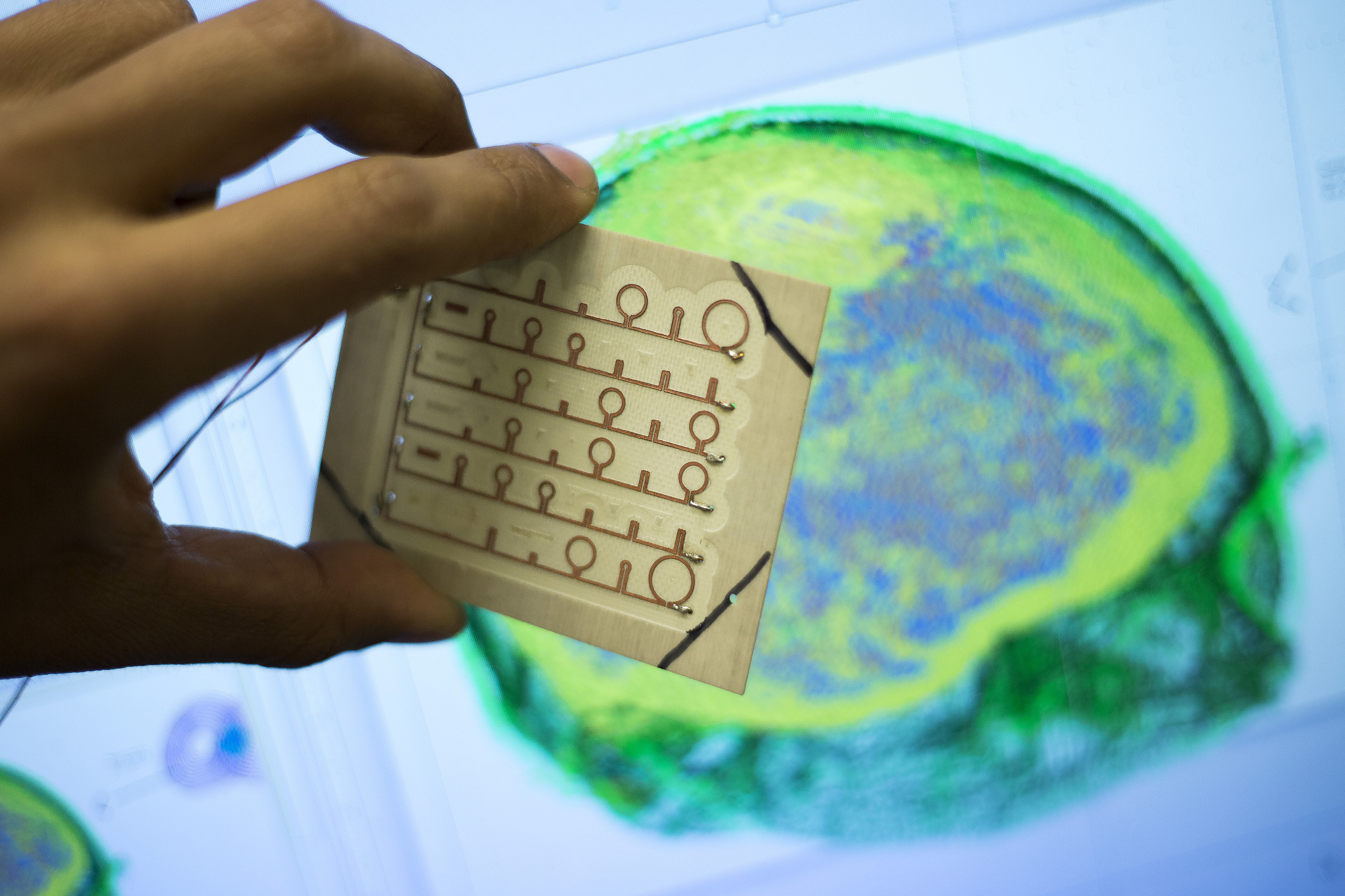 Luis Gomez, Electrical Engineering PhD Student, shows the headpiece — a square array of 64 circular metallic coils — next to computer simulations of a brain stimulation in the EECS Building on October 28, 2013. Researchers and doctors hope that the technology can one day help hit finer targets in the brain that are twice as deep as they can reach today to help improve depression treatment. Image credit: Joseph Xu, Michigan Engineering Communications & MarketingANN ARBOR—A brain stimulation technique that is used to treat tough cases of depression could be considerably improved with a new headpiece designed by University of Michigan engineers.

Computer simulations showed that the headpiece—a square array of 64 circular metallic coils—could one day help researchers and doctors hit finer targets in the brain that are twice as deep as they can reach today, and without causing pain.

In transcranial magnetic stimulation, special coils create a fluctuating magnetic field that then generates a weak electrical field that can travel through the scalp and skull noninvasively. The electrical signal activates neurons in targeted parts of the brain—a complex electrical network itself.

Exactly how the technique alleviates depression isn’t well understood, but it tends to reduce symptoms in roughly half of patients who don’t respond to antidepressants. It’s been an FDA-approved mental illness treatment since 2006, but researchers say the technology is still relatively crude.

It can send signals only 2 centimeters into the brain before it causes uncomfortable muscle contractions in a patient’s scalp. It’s not the depth that causes the contractions. It’s the relatively large focal spot required to go in that far.

“I started working on transcranial magnetic stimulation a while ago and realized the technology was very limited,” said Luis Hernandez-Garcia, a research associate professor of biomedical engineering and co-author of a paper on the work published in the October edition of IEEE Transactions on Biomedical Engineering.

“It was an uphill battle to get it where I wanted. If you wanted to reach deep in the brain, you also had to stimulate a lot of other brain regions that you really didn’t want to stimulate.”

Our coils will enable neuroscientists to further understand brain function by achieving a finer resolution and stimulating regions deeper in the brain. It could help us figure out which way information flows inside neural networks, and ultimately understand how the brain works. Luis Gomez

To treat depression more effectively, it’s been hypothesized that the signal should reach beyond 2 centimeters. In simulations, at 2.4 centimeters, the new system excited 2.6 times less unwanted brain volume than today’s systems. It can go deeper as well.

“That improvement isn’t marginal,” said co-author Eric Michielssen, a professor of electrical engineering and computer science. “This should open up a lot of opportunities to treat depression and other mental illness, as well as probe the brain.”

This type of neural stimulation is also a tool in the cognitive neuroscience field where researchers study how brain biology leads to thoughts and actions. For example, a neuroscientist can use it to activate regions of the brain thought to be responsible for hand movement and then watch for a hand response to confirm the hypothesis. To advance this field of study, scientists need the ability to zero in on smaller parts of the brain.

“Our coils will enable neuroscientists to further understand brain function by achieving a finer resolution and stimulating regions deeper in the brain,” said Luis Gomez, a doctoral student in electrical engineering and computer science and first author of the paper. “It could help us figure out which way information flows inside neural networks, and ultimately understand how the brain works.”

The headpiece design is a big departure from today’s figure 8-shaped devices made of just two coils. The researchers knew that in order to send a sharper signal, they’d have to change the shape of the fluctuating magnetic field the coils produce. To design a device that could do that, they worked with Anthony Grbic, an associate professor of electrical engineering and computer science who specializes in metamaterials—a class of substances tailored to exhibit specific electromagnetic properties that can, for example, focus light to a point smaller than its wavelength. Grbic suggested that a surface of loops could do the job.

“These coil arrays are sub-wavelength structures—textured devices designed to manipulate the magnetic near-field in ways that people have never imagined before,” said Grbic, the Ernest and Betty Kuh Distinguished Faculty Scholar.

The prototype needs only one power source, as opposed to 64. Other so-called multichannel arrays require a power source for each coil. Having just one would make it easier to use on patients and more affordable.

The paper is titled “Numerical Analysis and Design of Single-Source Multicoil TMS for Deep and Focused Brain Stimulation.” The study was funded by the National Institutes of Health grant number NS058691.