How a Silly Putty ingredient could advance stem cell therapies 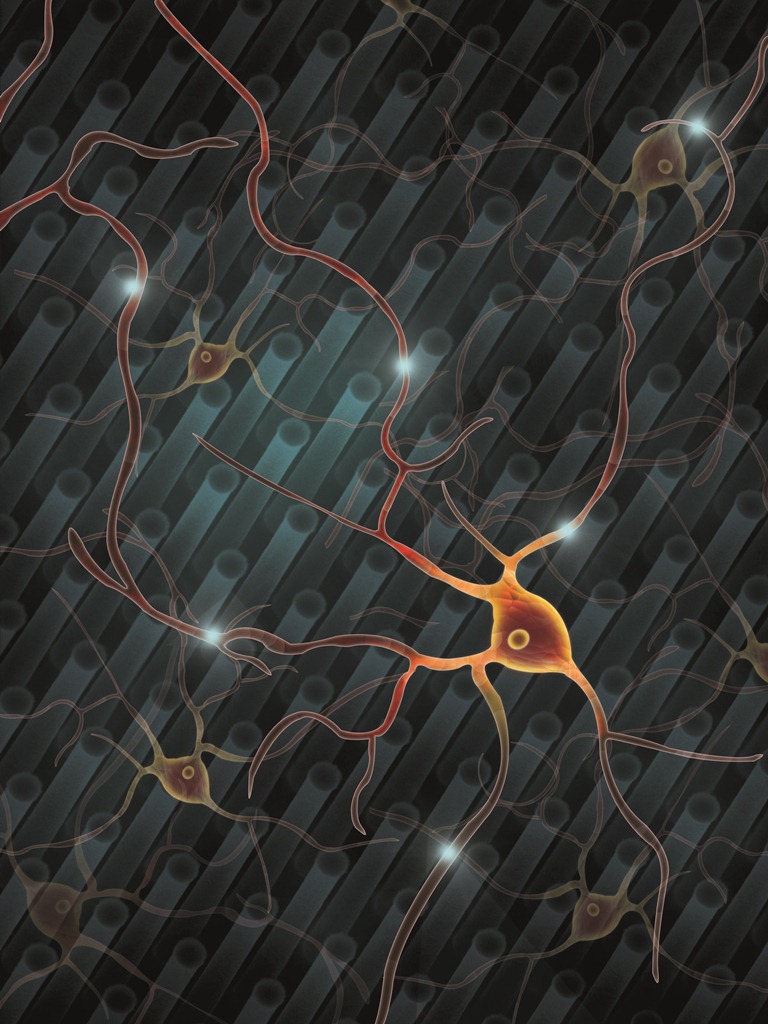 University of Michigan researchers have found that mechanical forces in the environment of human embryonic stem cells influences how they differentiate, or morph into the body’s different cell types. To arrive at the findings, they cultured the stem cells on ultrafine carpets made of microscopic posts of a key ingredient in Silly Putty. Image credit: Ye Tao, Rose Anderson, Yubing Sun, and Jianping FuANN ARBOR—The sponginess of the environment where human embryonic stem cells are growing affects the type of specialized cells they eventually become, a University of Michigan study shows.

The researchers coaxed human embryonic stem cells to turn into working spinal cord cells more efficiently by growing the cells on a soft, utrafine carpet made of a key ingredient in Silly Putty. Their study is published online at Nature Materials on April 13.

This research is the first to directly link physical, as opposed to chemical, signals to human embryonic stem cell differentiation. Differentiation is the process of the source cells morphing into the body’s more than 200 cell types that become muscle, bone, nerves and organs, for example.

In the specially engineered growth system—the ‘carpets’ Fu and his colleagues designed—microscopic posts of the Silly Putty component polydimethylsiloxane serve as the threads. By varying the post height, the researchers can adjust the stiffness of the surface they grow cells on. Shorter posts are more rigid—like an industrial carpet. Taller ones are softer—more plush.

“This is extremely exciting,” Fu said. “To realize promising clinical applications of human embryonic stem cells, we need a better culture system that can reliably produce more target cells that function well. Our approach is a big step in that direction, by using synthetic microengineered surfaces to control mechanical environmental signals.”

Fu is collaborating with doctors at the U-M Medical School. Eva Feldman, the Russell N. DeJong Professor of Neurology, studies amyotrophic lateral sclerosis, or ALS. It paralyzes patients as it kills motor neurons in the brain and spinal cord.

Researchers like Feldman believe stem cell therapies—both from embryonic and adult varieties—might help patients grow new nerve cells. She’s using Fu’s technique to try to make fresh neurons from patients’ own cells. At this point, they’re examining how and whether the process could work, and they hope to try it in humans in the future.

“Professor Fu and colleagues have developed an innovative method of generating high-yield and high-purity motor neurons from stem cells,” Feldman said. “For ALS, discoveries like this provide tools for modeling disease in the laboratory and for developing cell-replacement therapies.”

Fu’s findings go deeper than cell counts. The researchers verified that the new motor neurons they obtained on soft micropost carpets showed electrical behaviors comparable to those of neurons in the human body. They also identified a signaling pathway involved in regulating the mechanically sensitive behaviors. A signaling pathway is a route through which proteins ferry chemical messages from the cell’s borders to deep inside it. The pathway they zeroed in on, called Hippo/YAP, is also involved in controlling organ size and both causing and preventing tumor growth.

Fu says his findings could also provide insights into how embryonic stem cells differentiate in the body.

“Our work suggests that physical signals in the cell environment are important in neural patterning, a process where nerve cells become specialized for their specific functions based on their physical location in the body,” he said.

The paper is titled “Hippo/YAP-mediated rigidity-dependent motor neuron differentiation of human pluripotent stem cells.” Fu collaborated with researchers at the School of Dentistry and the Department of Molecular, Cellular and Developmental Biology in the U-M College of Literature, Science, and the Arts.