ANN ARBOR—Next year’s holiday travelers may see fewer delays thanks to research now being conducted by a team of University of Michigan engineers.

While the project uses public data that has been available for years, its size and scope make it unique, says Brian Lemay, a U-M doctoral student in industrial and operations engineering who leads the project.

“We’re the first to gather this data in one place and apply this level of computing power to it,” Lemay said. “That enables us to do a very sophisticated analysis of how weather and flight delays are connected and go far beyond individual airports. 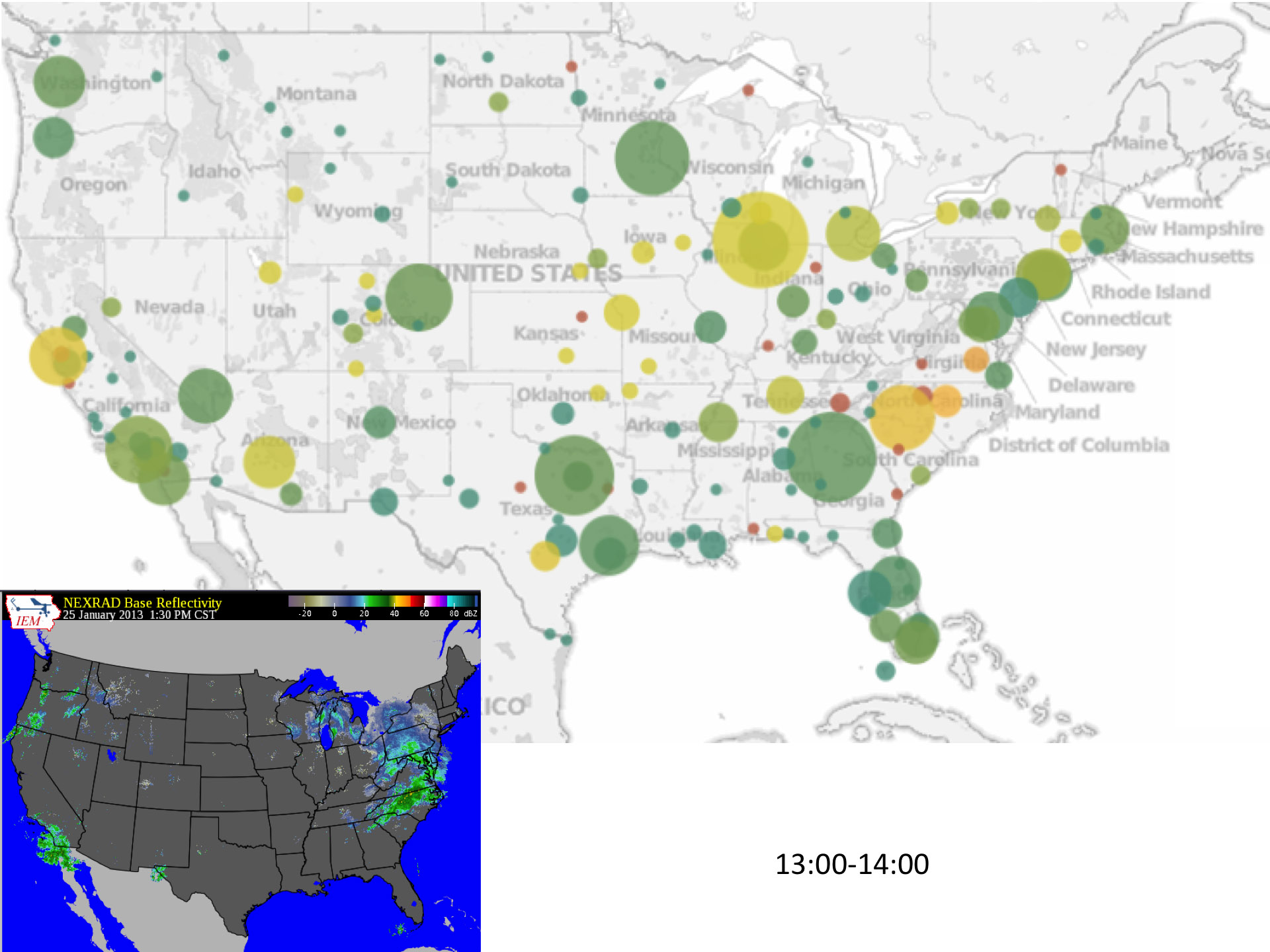 A map showing weather patterns in the lower right, while a larger U.S. map shows corresponding flight delays.“We can see how the weather in Atlanta may affect flight operations in Detroit later in the day, or exactly how a delayed plane on the East Coast ripples through the system to California.”

The chief goal is to enable airlines to anticipate and deal with delays before they happen, says Amy Cohn, a U-M associate professor in industrial and operations engineering who researches airline industry operations.

Today, most airlines compensate for delays by adding slack to the system. They may schedule in extra flight time during the winter or keep additional staff members on call. But generally, they don’t look at large-scale weather patterns when they’re building initial schedules. And their ability to shuffle resources to deal with emerging weather patterns is limited.

“Airlines generally deal with weather delays after they happen,” Cohn said. “We want to give them the ability to be a bit more proactive. When they’re able to predict delays further in advance, they’ll be able to do a much better job of communicating with passengers and optimizing resources.”

Cohn said the data from the project may be used to build computer-modeling software that could predict the outcome of an infinite number of hypothetical flight and weather scenarios, helping airlines spot likely weather delays in advance. 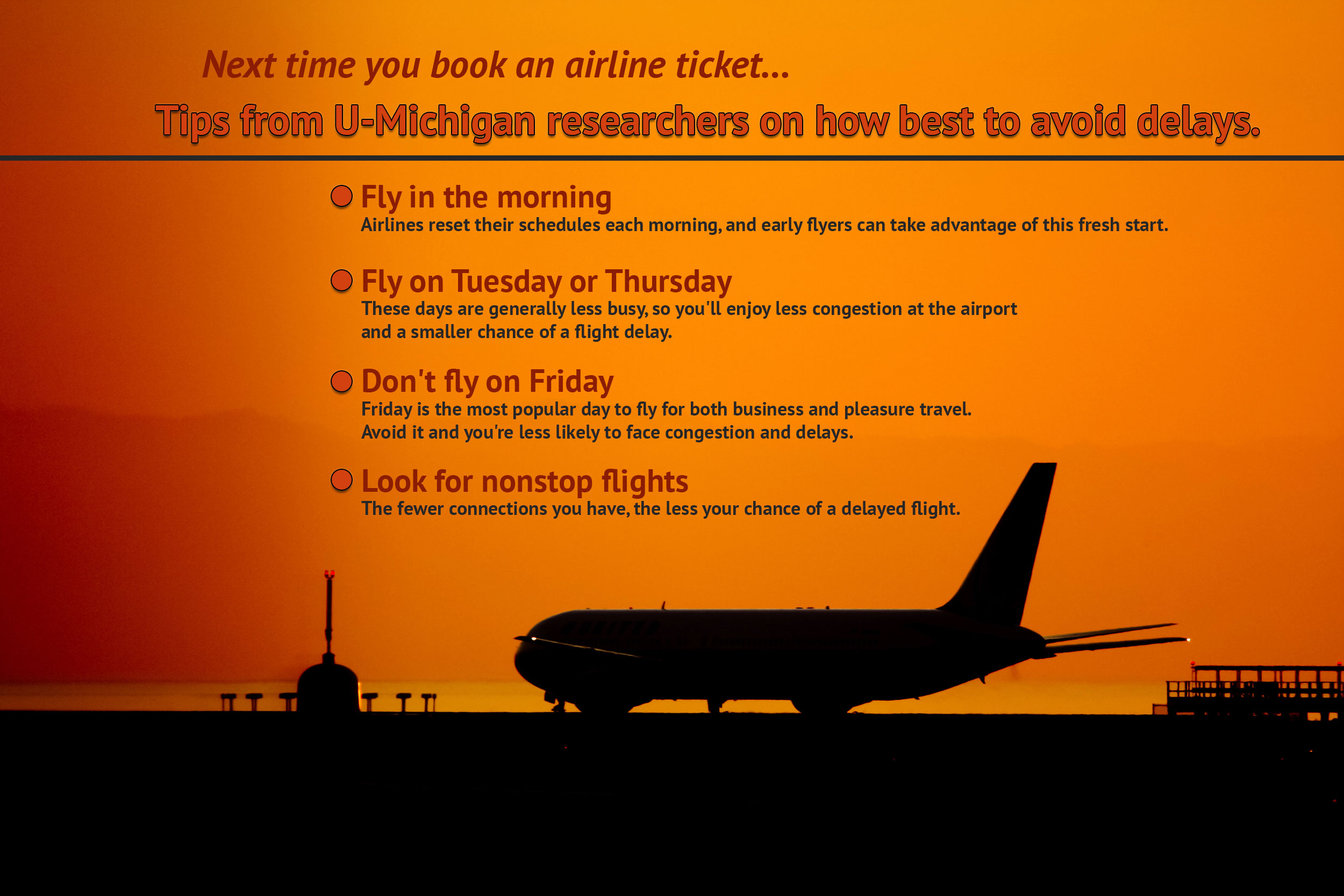 That knowledge could enable airlines to adjust their schedules to account for weather patterns. It may also lead to new options for passengers. For example, airlines could look several steps ahead to predict a future flight delay, then offer passengers a pre-emptive rebooking to avoid it.

“Imagine you’re scheduled to fly out of Detroit four hours from now and there’s a storm in Atlanta.” Cohn said. “The airline could use this data to determine that the storm in Atlanta is likely to delay your plane. They could then contact you and offer you a seat on an alternate flight. You save time, and the airline doesn’t have to accommodate you on a later flight after the delay happens.”

Airlines could also use the advance warning to allocate their own resources more efficiently, shuffling ground crews, flight crews and other assets to minimize disruption.

The project draws on resources from a wide swath of disciplines including engineering, computer science and others, says George Tam, a U-M industrial and operations engineering graduate student. He says that breadth of knowledge has brought a fresh perspective that could hold far-reaching benefits for both airlines and passengers.

“Aeronautics experts think about airplanes and meteorologists think about the weather,” he said. “But our background in industrial engineering and computer science enables us to put existing data together in new ways and ask a whole new set of questions. For me, that’s what has been really exciting about this research.”

Some of the first changes that passengers see are likely to be simple ones, like tweaks to flight times and more proactive communication.

“I think these new analytics will enable passengers as well as airlines to better manage the whole travel process,” Cohn said. “If airlines can offer more options and passengers can educate themselves on how to use those options, we’ll see fewer delays and a less stressful travel experience in the years to come.”