How common elements can make a more energy-secure future 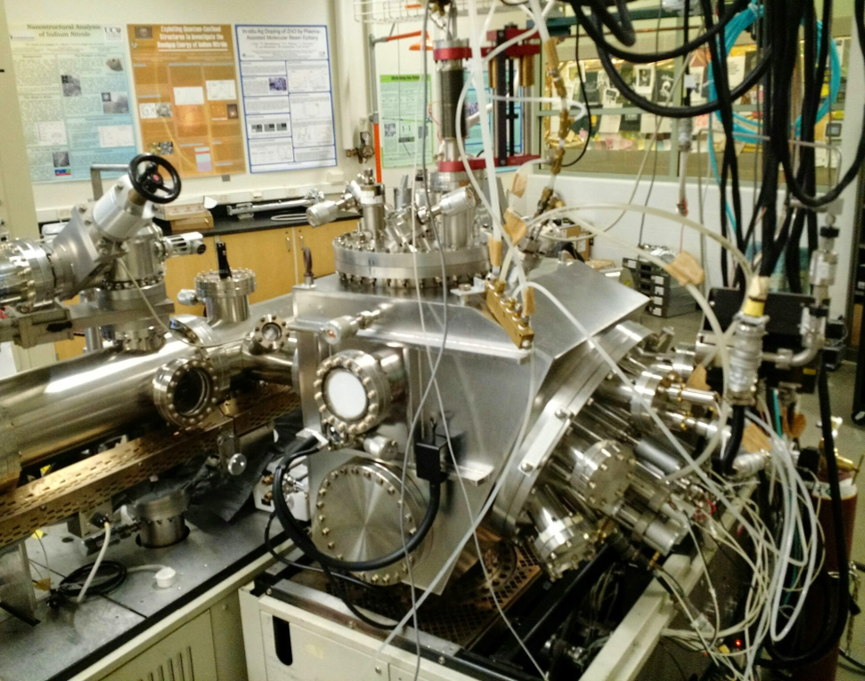 A molecular-beam epitaxy system lays down each atomic layer of the compound in a systematic fashion, so researchers can study the thin layer, or film, structure as they grow it. Image credit: Durbin Lab

ANN ARBOR—Thin-film solar panels, the cell phone in your hand and the LED bulb lighting your home are all made using some of the rarest, most expensive elements found on the planet.

An international team including researchers at the University of Michigan has devised a way to make these kinds of optoelectronic materials from cheaper, more abundant elements. These compounds can also be “tuned” to efficiently harvest electrical energy from the different wavelengths of light in the solar spectrum and to produce the range of colors we like to use in lighting.

Only specific kinds of compounds—a combination of two or more elements—can be used to make electronic devices that efficiently emit light or gather electricity. If you recall in your grade school chemistry classes, each column on the periodic table is considered a group of elements.

For example, group III includes elements such as indium and gallium—both relatively scarce elements that nevertheless currently underpin applications combining light and electricity. The problem is, these compounds often involve elements that are only found in a few locations around the world. 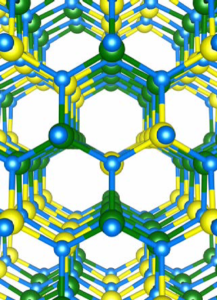 These new thin film compounds can be “tuned” to efficiently harvest electrical energy from the different wavelengths of light in the solar spectrum. Image credit: Durbin Lab

“In fact, we’re in danger of running out of some of those elements because they’re not easy to recycle and they’re in limited supply,” said physicist Roy Clarke, who leads the U-M effort. “It’s not viable for technology to rely on something that’s likely to run out on a scale of 10 to 20 years.”

The research team found a way to combine two common elements from columns bracketing group III to make a novel compound composed of elements from groups II, IV and V. This II-IV-V compound can be used in place of the rare elements typically found in III-V optoelectronic materials with similar properties—except far more abundant and less expensive.

The new compound of zinc, tin and nitrogen can harvest both solar energy and light, so it would work in thin-film solar panels as well as in LED light bulbs, cell phone screens and television displays.

Using magnesium instead of zinc further extends the reach of the materials into blue and ultraviolet light. Both compounds are also “tuneable”—that is, when the researchers grow crystals of either compound, the elements can be ordered in such a way that the material is sensitive to specific wavelengths of light.

This tunability is desired because it allows researchers to tweak the material to respond to the widest range of wavelengths of light. This is especially important for light-emitting diodes so that device designers can select the color of light produced.

When you’re lighting a home or an office, you want to be able to adjust the warmth of the light, oftentimes mimicking natural sunlight. These new II-IV-V compounds would allow us to do that.

“When you’re lighting a home or an office, you want to be able to adjust the warmth of the light, oftentimes mimicking natural sunlight,” Clarke said. “These new II-IV-V compounds would allow us to do that.”

Graduate students Robert Makin, Krystal York and James Mathis grew the thin films in the lab of Steve Durbin, a professor of electrical and computer engineering at Western Michigan University.

Makin, who just earned his Ph.D. from WMU and is the lead author of the study, used a technique called molecular beam epitaxy (MBE) to produce the desired compounds under the correct conditions to make films with a carefully controlled degree of atomic ordering.

MBE lays down each atomic layer of the compound in a systematic fashion, so the researchers could study the thin layer, or film, structure as they were growing it. The next phase of the research, leading into construction of various device designs, calls for detailed studies of this material family’s electronic response and testing of various nanoscale architectures which exploit their versatility.

The research team also includes members from the Université de Lorraine in France and the University of Canterbury in New Zealand. Their research is published in Physical Review Letters.