How everyday products are supercharging landfill gas, and what that means

ANN ARBOR—Synthetic compounds increasingly used in everyday products like shampoo and motor oil are finding their way into landfills and supercharging the biogas those landfills produce, researchers at the University of Michigan have found.

While it’s a problem today, the researchers say it could be an opportunity to get more energy out of landfill gas.

The compounds, called “siloxanes,” are efficient at conducting heat and interacting with water, and as such their popularity has increased in a variety of consumer products. That means more and more siloxanes are headed to your local landfill.

Biogas refers to fuel gases that are synthesized from different biological or organic feedstocks like landfill gas and wastewater treatment plants. In recent years, it has become clear that siloxanes have been damaging the power-generating equipment that’s fueled with landfill gas. But the researchers say the siloxanes could actually be harnessed to produce more energy.

The U-M team conducted the first chemical analysis of how siloxanes affect biogas. The researchers found that siloxanes increase the reactivity of biogas, leading to faster ignition in engines and the release of more energy. But those engines—typically power-generating gas turbines and reciprocating piston engines—can be damaged by the siloxanes in the biogas. 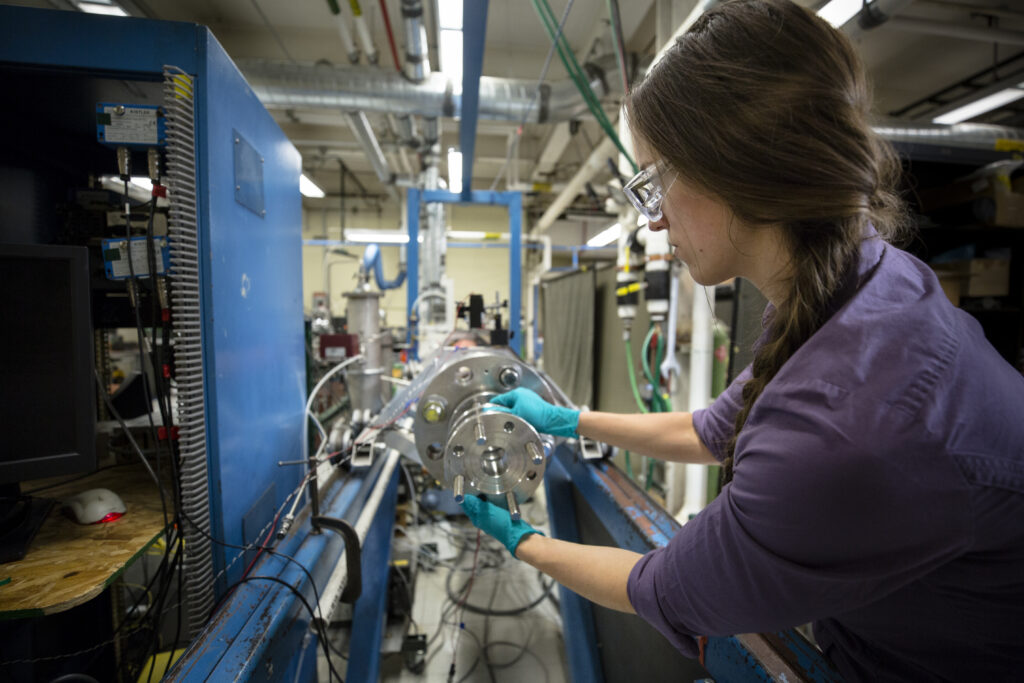 “Siloxanes are highly ignitable,” said Margaret Wooldridge, the Arthur F. Thurnau Professor of Mechanical Engineering and director of the Dow Sustainability Fellows Program at U-M. “They change the chemistry of biogas like crazy. The stuff is like rocket fuel, literally—crazy-reactive.”

The siloxanes essentially change the biogas’s “flame speed,” which is a measure of how quickly a fuel combusts and drives a turbine or piston.

Biogas is composed mainly of methane. Methane gas is found in nature but it is also produced when organic material decomposes in landfills, along with hydrogen, carbon monoxide, and other hydrocarbons. Methane is the main component of natural gas and biogas, making both valuable sources of fuel and energy that are cleaner than coal.

In the atmosphere, however, methane is particularly good at trapping heat, adding to our global warming problem. In particular, methane is 30 times more effective a greenhouse gas than CO2. And according to the EPA, municipal solid waste landfills account for 14% of all human-related methane emissions in the U.S. each year—the third-largest source behind the gas and petroleum industry and agriculture.

That property has spurred efforts to capture methane from landfills and use it as a fuel, instead of allowing it to escape unchecked.

Specifically, the researchers clocked how long it took for each mixture to ignite. Fuels that have a shorter ignition delay are considered more ignitable or reactive—and hydrogen is one of the most reactive fuels we use.

The results of U-M’s research are published in the latest edition of Combustion and Flame. Researchers hope their work sheds light on how siloxanes alter engine performance when used as a fuel.

“Trace concentrations of siloxanes have been a known problem in biogas applications—leading to the formation of abrasive silica deposits on engine components,” said Rachel Schwind, a doctoral student and study co-author. “For this reason, most prior research in this area has focused on how to remove them from the captured gas.”

Harnessing siloxanes, rather than removing them

Along with the problem siloxanes pose, there is also potential. Wooldridge said siloxanes could be key to deriving bolstered energy production from biogas.

“We would love to be able to harness them as an energy source,” she said.

Analyzing the combustion chemistry is a step in that direction.

“That would potentially negate the need for scrubbing or removal during biogas processing and reduce costs,” Schwind said. “If we can reduce those costs, it moves biogas closer to being a truly carbon neutral fuel. And if we can make landfill gas a more economically attractive option, landfill operators will have more incentive to capture and utilize this harmful greenhouse gas.”

The research was supported by the U.S. Department of Energy’s Basic Energy Sciences program.