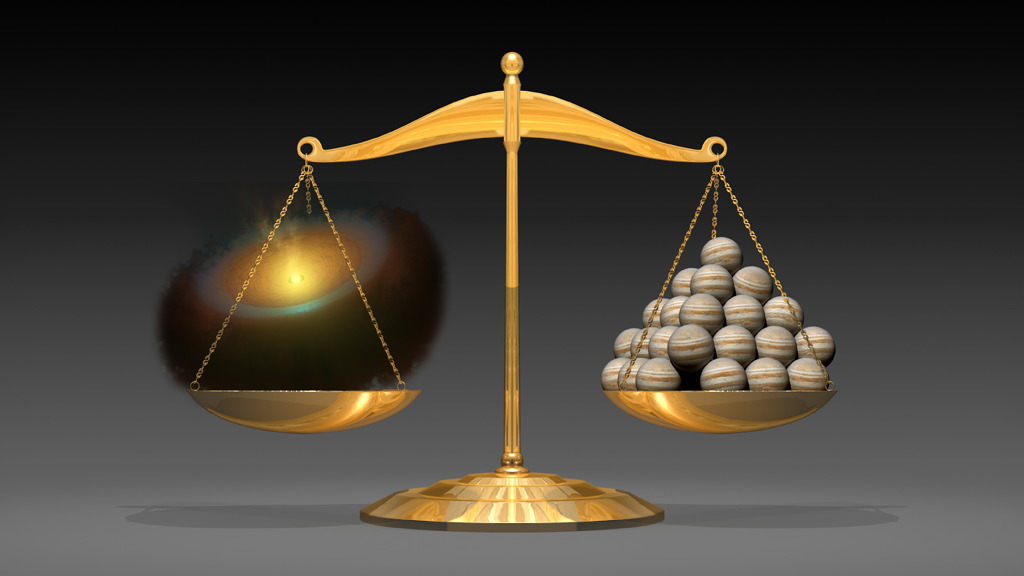 This artist’s illustration shows a planetary disk that weighs the equivalent of 50 Jupiter-mass planets. It demonstrates a first-of-its-kind feat from astronomers using the Herschel Space Observatory. The scientists were able to weigh the planet-forming contents swirling around a young star with the most precision yet. The observations revealed enough gas to make the equivalent of 50 Jupiters, or five solar systems like our own. Herschel is a European Space Agency mission with important NASA participation. Image credit: NASA/JPL-CaltechANN ARBOR—In a study that gives astronomers new insights into how planets form, research led by the University of Michigan has enabled a dramatically more precise measurement of the amount of dust and gas in the planet-forming disk around a young star.

The findings speak, in a way, to a fundamental question: “Why are we here?”

“If you want to understand the origin of planets—that is, terrestrial worlds like Earth with abundant water and life and gas-rich worlds such as Jupiter—you have to understand how planets are born and what outcomes are possible under any circumstances,” said Edwin Bergin, U-M professor of astronomy and lead author of a paper on the research published in the current issue of Nature. “And the mass of the protoplanetary disk is a fundamental quantity you have to have in order to understand planetary birth.”

Until now, it’s been difficult for astronomers to accurately gauge the mass of protoplanetary disks, which hold the building blocks of planets. The disks are made mostly of gaseous hydrogen—the most abundant element in the universe, but the hydrogen in them is too cold to detect with our instruments.

So, astronomers have used proxies—the most common one being the small but important fraction of dust grains heated indirectly by the starlight in these systems. Based on the dust measurements, scientists have estimated the disks’ total gas mass.

“The tiny solids in the disk that we measure are the seeds of terrestrial worlds—the stuff the Earth is made of ground into tiny little pieces, smaller than the width of a human hair,” said Ilsedore Cleeves, a U-M doctoral student in astronomy and co-author of the paper. “We are sensitive to the dust when it’s tiny. When it’s forming planets, it has to grow from sub-micron to pebbles to boulders. When the grains become boulders, we can’t detect them anymore. You could hide tons of mass that way.”

Because of this and other issues, estimates of the mass of protoplanetary disks can vary by two or three orders of magnitude. Such a vast discrepancy makes it difficult for astronomers to know how much water and carbon a system contains, and which systems can make a planetary system such as our own.

Using the European Space Agency’s Herschel space observatory, an orbiting radio telescope, Bergin and his colleagues have measured the mass of the disk at the nearby star TW Hydrae with 10 times more accuracy than ever before. TW Hydra, the closest young star to our sun, is 176 light years away toward the constellation Hydra.

The astronomers accomplished this by observing the amount of a close cousin of hydrogen called deuterium. Deuterium is hydrogen with an extra neutron in its nucleus, and in protoplanetary disks its abundance is directly proportional to the amount of hydrogen present.

They found that TW Hydra’s disk contains enough mass to make five solar systems like our own, or 50 Jupiters.

Observing so much material around TW Hydrae is unusual for a star of this age because it was thought that most solar systems form before a star reaches 2 million years old. TW Hydra is at least 3 million years old, and possibly 10 million.

“Our findings tell us that different stars have different routes to making planets and that planet formation is not a one-size-fits-all process,” Bergin said. “We already know that our solar system is not alone and that there are systems that have more massive planets such as Jupiter. Our measurement shows that this disk is capable of making a solar system in some ways quite different from our own.”

In a separate Herschel survey, scientists had already identified TW Hydrae as a star with a disk that contains enough water to fill the equivalent of several thousand Earth oceans. The new method of ‘weighing’ a disc means that the volume of materials available—including water—could have been underestimated in this system and in others. This work will allow astronomers to re-evaluate the mass of discs around other stars of varying ages, providing more insight into the planet-building process.

“Perhaps if some gas disks are longer-lived, they might be better ones for making planetary systems,” Bergin said.

“The detection of heavy molecular hydrogen was only possible thanks to the sensitivity of Herschel, providing a huge step forward in ‘weighing’ disks around stars,” said Göran Pilbratt, ESA’s Herschel project scientist.

The paper is titled “An Old Disk That Can Still Form a Planetary System.” The survey was conducted as part of an open time Herschel Program using the Photoconductor Array Camera and Spectrometer. Herschel is an ESA space observatory with important participation from NASA. PACS was designed and built by a nationally funded consortium led by the Max Planck Institute for Extraterrestrial Physics in Germany. The work is supported by NASA and the National Science Foundation.