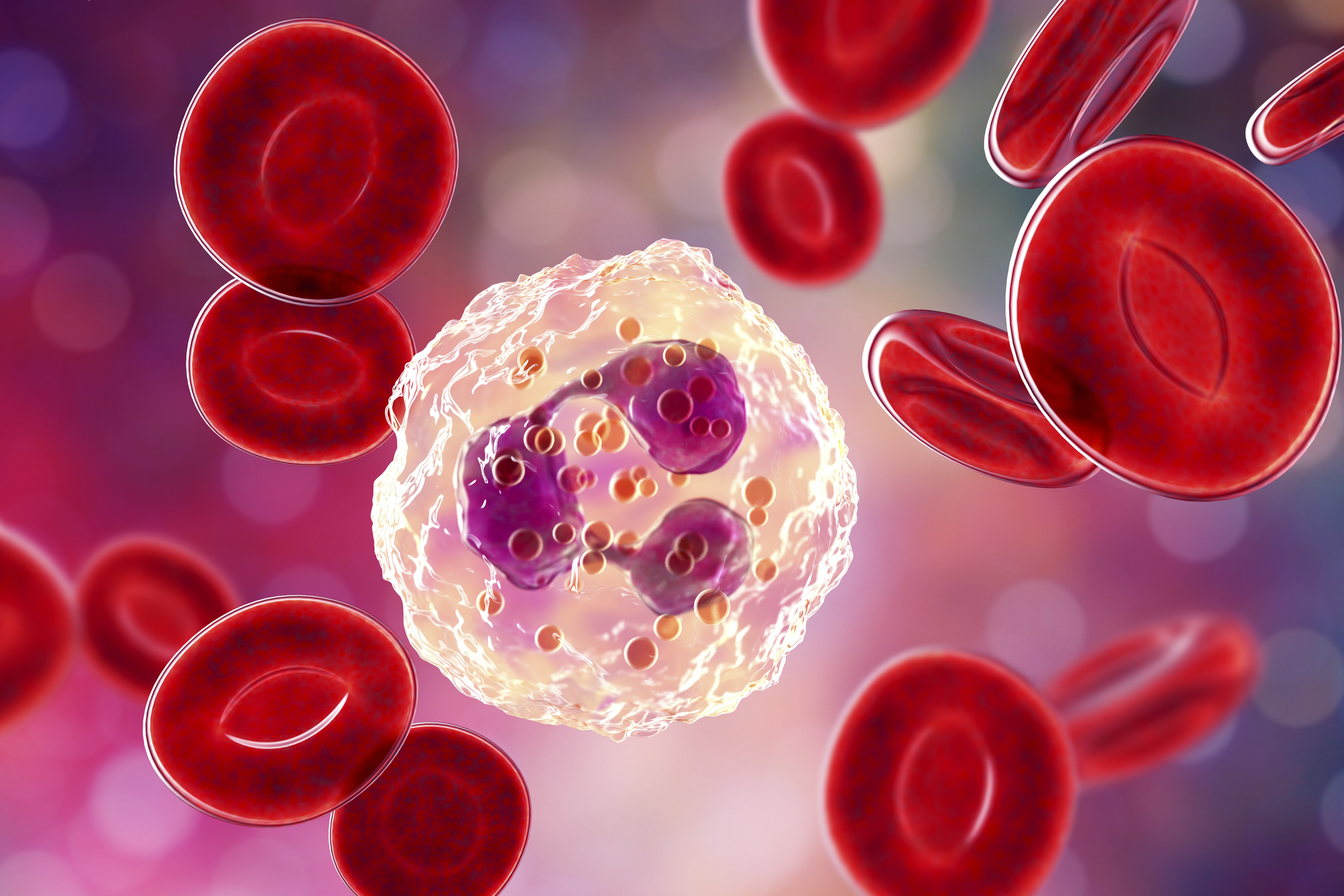 A long-ignored white blood cell may be central to the immune system overreaction that is the most common cause of death for COVID-19 patients—and University of Michigan researchers found that rod-shaped particles can take them out of circulation.

The No. 1 cause of death for COVID-19 patients echoes the way the 1918 influenza pandemic killed: their lungs fill with fluid and they essentially drown. This is called acute respiratory distress syndrome. But a new way of drawing immune cells out of the lungs might be able to prevent this outcome. This research is among the essential projects at U-M that have continued through the pandemic uninterrupted. 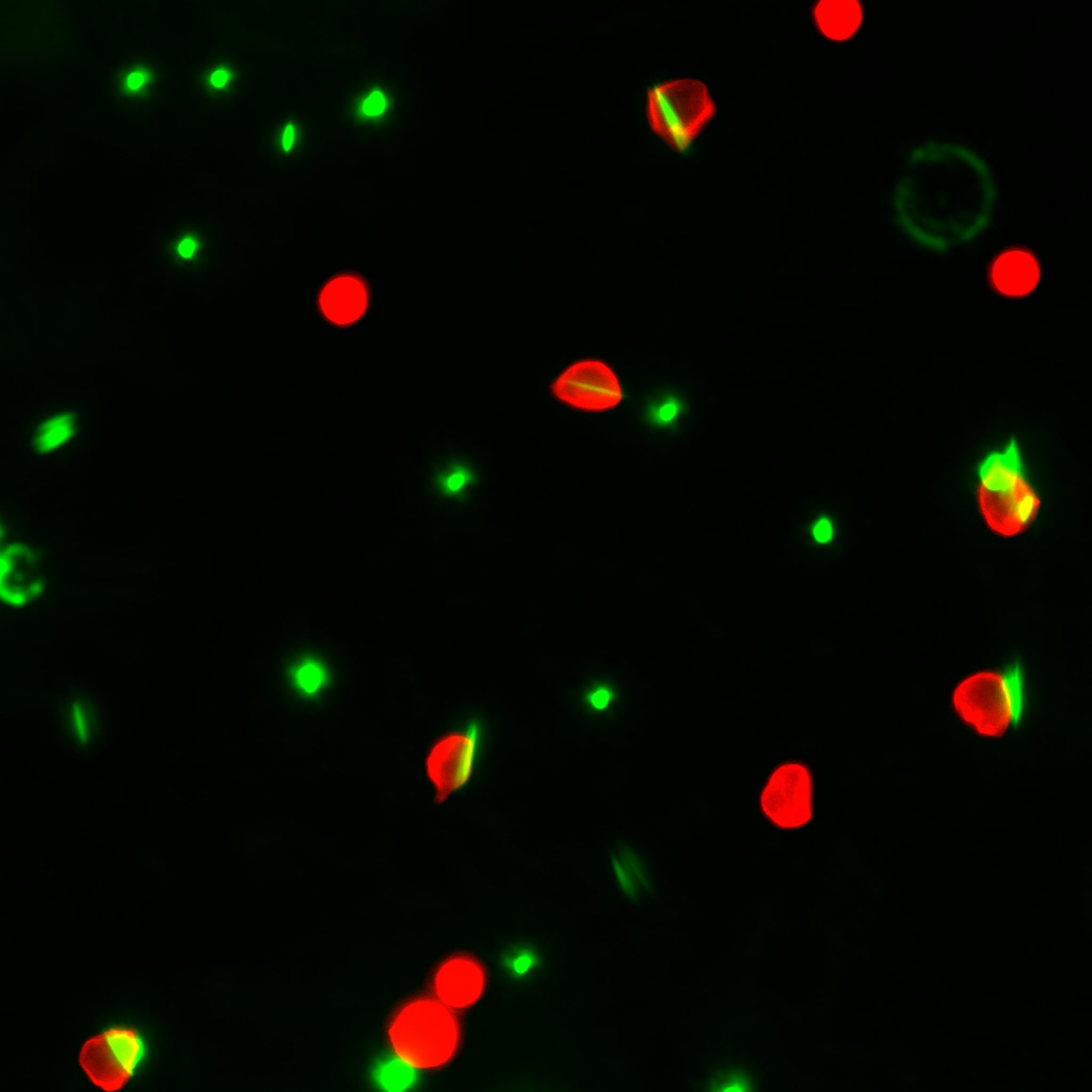 White blood cells called neutrophils, tagged with fluorescent red dye, eat spheres or rods that have been tagged with green dye. Because neutrophils are more willing to eat rods than are other immune cells, an injection of rod-shaped particles could be used to target neutrophils specifically. Earlier work in mice from the Eniola-Adefeso group suggests that injections of spheres can reduce excessive inflammation in the lungs. Image credit: Hanieh Safari, Eniola-Adefeso Lab, University of Michigan

ARDS is a manifestation of a condition known as cytokine storm, in which the immune system overreacts and begins attacking the person’s own organs. In ARDS, out-of-control white blood cells break down lung tissue and cause fluid to build up. Helping to lead the charge is a type of white blood cell called the neutrophil, which makes up 60% to 70% of intruder-eating “phagocyte” cells in humans.

“They’re like the Coast Guard—their main job is to make sure your boundaries aren’t breached,” said Lola Eniola-Adefeso, University Diversity and Social Transformation Professor and a professor of chemical engineering, who led the research.

Neutrophils aren’t specialized, which enables them to respond to many threats, she explained. But sometimes, that lack of specialization means they don’t know when to quit.

“As long as there’s cues, neutrophils keep acting. In some instances, the feedback loop is broken, and that turns what is meant to be a good response into a bad response,” Eniola-Adefeso said.

One of their actions is to emit signaling molecules called cytokines that tell cells to break down barriers and let blood and fluid into a problem site. When that response turns bad, the neutrophils need to be stopped so that other cells can step in and repair the damage.

Previously, Eniola-Adefeso’s group showed that plastic microparticles injected into the blood of mice could distract neutrophils, diverting them away from areas of severe inflammation in their lungs. The neutrophils would grab the particle and head to the liver to dispose of it. Microplastics used in this way eased acute lung injury in mice.

But any type of blood phagocyte—such as monocytes, neutrophils or dendritic cells—might take up a sphere, which means a sphere-based therapy is likely to affect other parts of the immune response. However, it was already known that other phagocytes aren’t fond of rod-shaped particles. Eniola-Adefeso said they “get lazy” with the long wrapping process around a rod.

“We asked, do neutrophils also have a disdain for eating rods?” she said. “We found the complete opposite. They actually have a preference for eating rods.”

And that preference is useful for targeting neutrophils and leaving other white blood cells to do their jobs. They found that when they offered rods to different phagocytes, 80% of the neutrophils ate them, whereas only 5% to 10% of other phagocytes did. The comparisons included macrophages, another cell that eats intruders, and dendritic cells, which capture intruders and then show the other immune cells what to look for.

The team is currently exploring whether neutrophil-distracting particles can be made from medications rather than plastic. Eniola-Adefeso is now working with the U-M Office of Technology Transfer to advance her delivery system toward clinical trials, in hopes that it may prove useful in the fight against COVID-19. U-M has applied for patent protection and has launched a start-up company, Asalyxa.

The paper is titled, “Neutrophils preferentially phagocytose elongated particles—opportunity for selective targeting in acute inflammatory diseases,” and is published in the journal Science Advances.

The research is funded by the Falk Medical Research Trust, the National Institutes of Health and the University of Michigan.