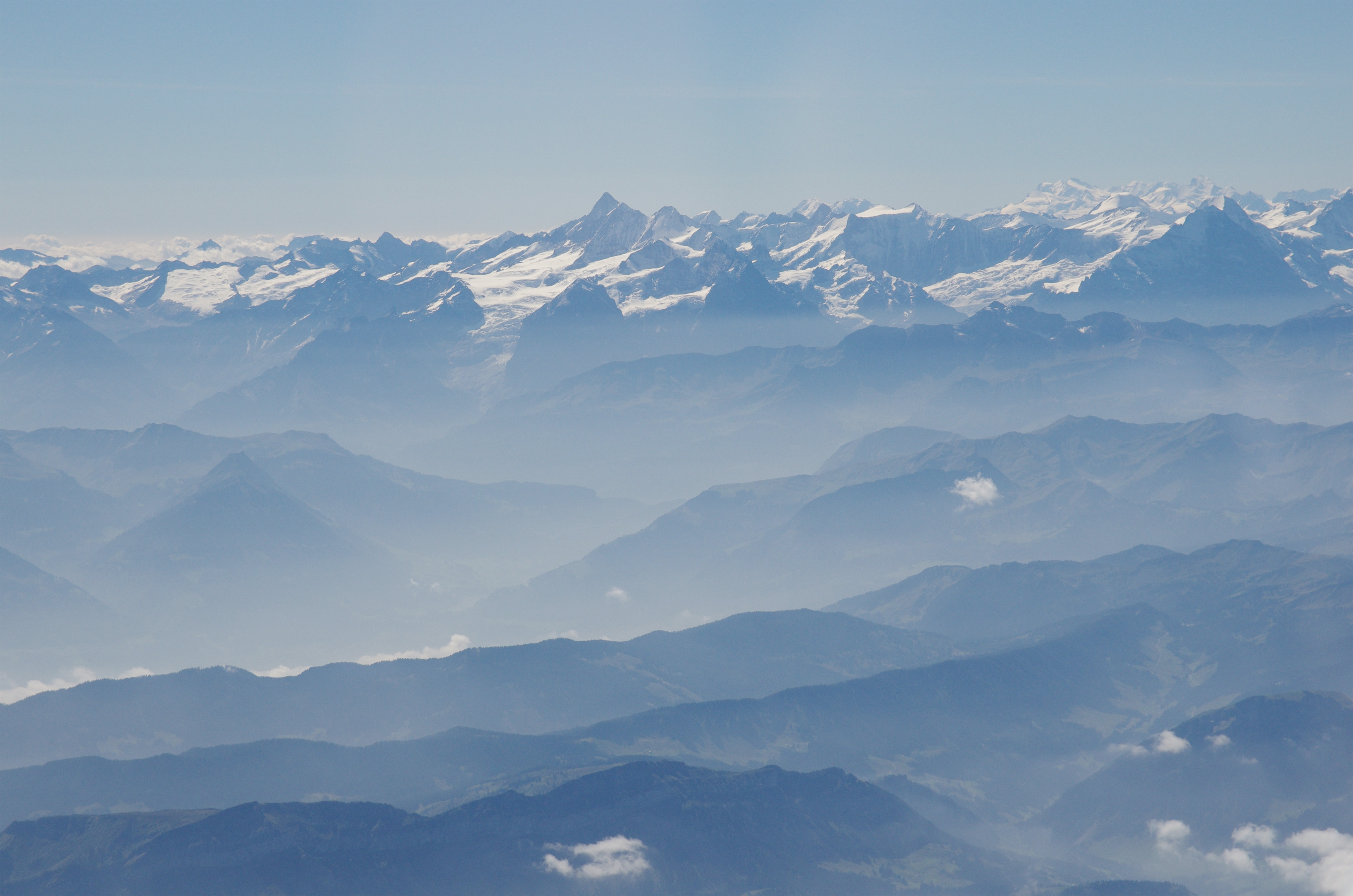 This photo from summer 2012 shows how air pollution in the Alps tends to be confined to lower altitudes, concentrating the deposition of soot and dust on the lower slopes. At center left in this picture, a glacier can be seen extending from a high altitude snow field, above the pollution layer, down into the valley where its lower reach is bathed in pollutants. Image credit: Peter HolyANN ARBOR—Coal soot shrank the Alpine glaciers in mid-19th-century Europe, according to new findings that show how black carbon alone—even without warmer temperatures—can affect ice and snow cover.

The research, which involved a University of Michigan atmospheric scientist, provides insights into when the so-called Little Ice Age ended and why European glaciers began to retreat decades before global temperatures rose.

The Little Ice Age was a relatively recent few-hundred-year period of long, severe winters across much of the planet. Glaciers encroached on mountain villages and rivers and harbors froze over. Shorter, unpredictable growing seasons led to scattered famines. Scientists have interpreted temperature records to show that it ended sometime in the late 19th or early 20th century. But European glacier records tell a different story.

Between 1860 and 1930, large glaciers in the Alps retreated an average of nearly 1 kilometer while temperatures in that region actually dropped nearly 1.8 degrees Fahrenheit (1 degree Celsius), according to NASA.

“Something was missing from the equation,” said Thomas Painter, a snow and ice scientist at NASA’s Jet Propulsion Laboratory in Pasadena, Calif. Painter led the new study, published in the current issue of Proceedings of the National Academy of Sciences.

The researchers looked to history for answers. Europe was in the throes of industrialization around the time the glaciers started shrinking. Residents, the transportation sector and industry began burning coal in earnest, releasing huge quantities of black carbon and other dark particles into the atmosphere, according to NASA. Black carbon absorbs sunlight and when particles settle on snow and ice, they heat up and accelerate melting.

To figure out how much black carbon was in the air and the snow when the Alpine ice began to dissipate, the researchers examined records from ice cores drilled from several European mountain glaciers. They used the amount of carbon particles in the ice core layers to estimate how much black carbon landed on the lower parts of the glaciers where melting occurred.

Then the team ran computer models of glacier behavior, starting with recorded weather conditions and adding the new black carbon data. Mark Flanner, U-M assistant professor of atmospheric, oceanic and space sciences, led the modeling of how much the black carbon reduced the amount of light the snow reflected.

“Our model treats the sunlight photons like pinballs bouncing through the ice crystals that make up the snow,” Flanner said. “Every once in a while, one of the photons encounters a dark soot particle, which absorbs it and heats up.”

Once they knew the increase in glacier heating, they were able to simulate glacier mass loss and timing in a way that mirrored historic glacier records—despite the cooling that occurred during that period. The results provide strong evidence that the Little Ice Age, as defined by glacier length, ended in Europe around the 1860s, rather than decades later.

“Before now, most glaciologists believed the end of the Little Ice Age came in the mid-1800s when these glaciers retreated, and that the retreat was due to a natural climatic shift, distinct from the carbon dioxide-induced warming that came later in the 20th century,” Painter said. “This result suggests that human influence on glaciers extends back to well before the industrial temperature increases.”

“It’s interesting that soot had a larger effect in19th century Europe than it is having now,” Flanner said. “This was before we learned how to capture the particles as they were emitted. We were just burning stuff and letting the pollution accumulate in the atmosphere.”

While the study was focused on explaining the past, the findings could be relevant now in places like South Asia, where ice and industrialization coexist.

“The retreat of glaciers in the Alps has long been a focal point of exploration of changes in the Earth system,” said Georg Kaser, a study co-author from the University of Innsbruck in Austria and lead author of the cryosphere chapter of the Intergovernmental Panel on Climate Change’s upcoming Fifth Assessment Report.

“We must now look closer at other regions on Earth, such as the present-day impacts of black carbon on glaciers in the Himalaya.”