How to wipe out polio and prevent its re-emergence 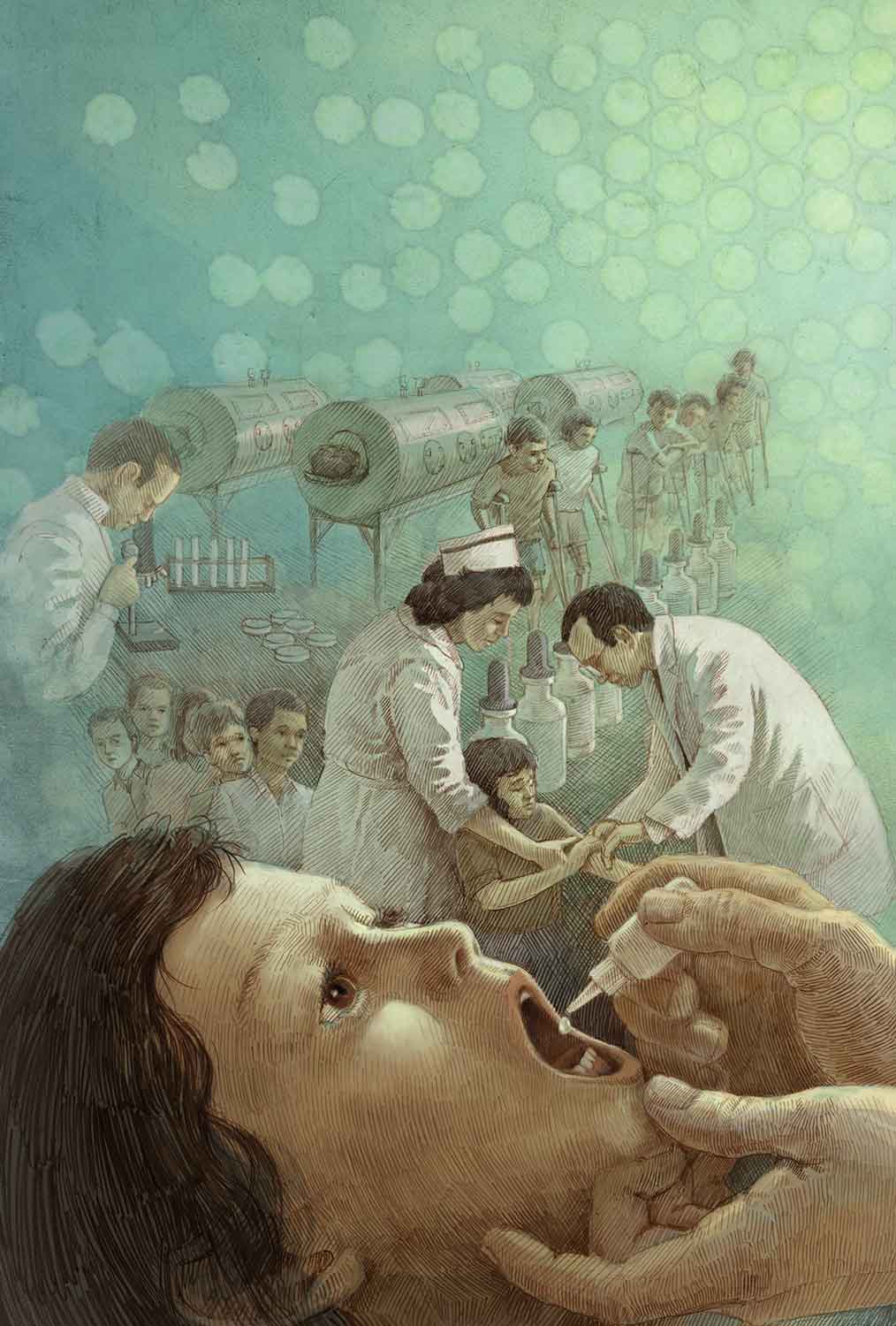 Polio from past to present. The background shows children in iron lungs and children walking with the aid of crutches. The foreground shows polio vaccine development, with Jonas Salk administering the inactivated polio vaccine and the use of Albert Sabin’s oral polio vaccine. Image credit: John MegahanANN ARBOR—Public health officials stand poised to eliminate polio from the planet. But a new study shows that the job won’t be over when the last case of the horrible paralytic disease is recorded.

To ensure that the disease is truly eradicated, aggressive surveillance programs and vaccination campaigns must continue in endemic countries for years after the last reported case, they conclude.

“Using transmission models, we show that you can have sustained chains of silent transmission in populations for more than three years, without a single person ever showing up as a reported polio case,” said Martinez-Bakker, who completed the six-year polio study as part of her doctoral dissertation in the U-M Department of Ecology and Evolutionary Biology.

The new findings were published June 19 in the open access journal PLOS Biology in a study titled “Unraveling the transmission ecology of polio.” The co-authors are Martinez-Bakker’s dissertation advisers, Aaron King and Pejman Rohani of the U-M Department of Ecology and Evolutionary Biology.

Pakistan, Afghanistan and Nigeria are the only countries where polio remains endemic, down from more than 125 countries in 1988. The disease mainly affects children under 5, and one in 200 infections leads to irreversible paralysis, according to the World Health Organization, which reported 416 cases of polio worldwide in 2013.

Martinez-Bakker analyzed polio case reports from large-scale U.S. epidemics in the pre-vaccine era, along with birth statistics and census numbers from every state. This enormous data set provided a unique glimpse into the ecology of polio infection in the relative absence of human intervention.

And it led her to conclude that the leading explanation for the marked increase in U.S. polio incidence from the 1930s to the 1950s—an idea known as the hygiene hypothesis or the disease of development hypothesis—is likely wrong.

In particular, the sharp increase in cases that occurred after the mid-1940s appears to be a straightforward consequence of a surging birth rate during the post-war baby boom, not the result of improvements in sanitation and hygiene, as textbooks suggest.

“If you have more kindling, you can have a much larger forest fire,” Martinez-Bakker said. “The baby boom provided more kindling for polio epidemics—young children and infants over 6 months of age—so much more explosive outbreaks were now possible.”

Disease transmission models allowed her to track the movement of poliovirus and reconstruct the millions of unobserved, symptomless infections that spread the disease in the first half of the 20th century.

The number of U.S. polio cases peaked in 1952 at 57,000. Three years later, mass inoculations with Jonas Salk’s vaccine began after it was declared “safe, effective and potent” during an April 1955 scientific meeting at U-M.

The new U-M research shows for the first time that more than 3 million Americans were likely infected with poliovirus during that peak year of 1952. The study also explains why U.S. polio epidemics in the pre-vaccine era were explosive, seasonal and varied geographically.

“Reaching eradication and preventing re-emergence of polio requires intimate knowledge of how the virus persists,” Martinez-Bakker said. “Historical epidemics that predate the use of vaccines can be used to disentangle the epidemiology of disease from vaccine effects. They allow us to establish a baseline by studying the system in the absence of intervention.”

Martinez-Bakker is supported by the National Science Foundation’s Graduate Research Fellowship Program and U-M’s Rackham Merit Fellowship. Rohani and King are supported by the Department of Homeland Security and the National Institutes of Health. This research was supported in part through computational resources and services provided by Advanced Research Computing at U-M and by UAF Life Science Informatics.