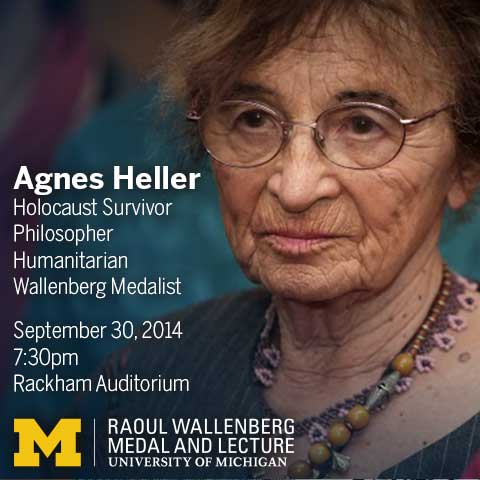 ANN ARBOR—Hungarian philosopher and Holocaust survivor Agnes Heller on Sept. 30 will receive the 23rd Wallenberg Medal, a humanitarian honor named after a University of Michigan alumnus who saved tens of thousands of Jews near the end of World War II.

After U-M President Mark Schlissel presents the award at 7:30 p.m. in Rackham Auditorium, Heller will hold a conversation with Scott Spector, professor of Germanic languages and literatures, history and Judaic studies.

Heller has spent her career seeking to understand the nature of ethics and morality in the modern world, and the social and political systems and institutions within which evil can flourish.

Like U-M alumnus Raoul Wallenberg, Heller has demonstrated that courage is the highest expression of civic spirit. She has witnessed regimes that have organized murder, crushed dissent and persecuted independent voices.

In 1944, as a young woman surviving in Budapest, she knew the name “Wallenberg.” Raised in a Jewish family, her father used his knowledge of German to help families emigrate from Nazi Europe. While Agnes and her mother avoided deportation, her father was sent to Auschwitz, where he died. She also lost many childhood friends in that terrible time.

Heller has said the Holocaust “exercised an immense influence on my whole life, particularly on my work,” and she believes she has “a debt to pay as a survivor.”

Her experiences during World War II led her to question the fundamental philosophical source of morality and evil in people and what kind of a world can allow horrific events like the Holocaust. She spoke out vigorously for autonomy and self-determination after the suppression of the Hungarian Revolution of 1956.

“My experience of the Holocaust was joined with my experience of the totalitarian regime,” she said. Both raised similar questions in what she calls her “soul search and world investigation…I had to find out what morality was all about.”

Following the defeat of the 1968 Prague Spring, she went into exile and became the Hannah Arendt Visiting Professor of Philosophy in the graduate studies program of The New School in New York. She is an influential scholar who publishes internationally acclaimed works on ethics, aesthetics, modernity and political theory.

In 2010, she was awarded Germany’s prestigious Goethe Medal.

Now retired from The New School, Heller has returned to Budapest, where she lives in a small apartment high above the Danube River. She remains fully engaged in public life, speaking out against the neo-nationalist and anti-Semitic strains that are again current there.

She actively argues against the policies of Hungarian Prime Minister Viktor Orban and his party, in light of their actions to strip universities of their independence and limit freedom of expression.

The current political climate in Hungary has made many university faculty members reluctant to speak out against policies implemented by the ministry of education.

Heller will be at U-M for four days, meeting with graduate and undergraduate students as well as faculty members.

A 1935 graduate of U-M’s College of Architecture, Wallenberg saved the lives of tens of thousands of Hungarian Jews when he served as a Swedish diplomat near the end of World War II.

In 1944, at the request of Jewish organizations and the American War Refugee Board, the Swedish Foreign Ministry sent Wallenberg on a rescue mission to Budapest. Over the course of six months, Wallenberg issued thousands of protective passports and placed many thousands of Jews in safe houses throughout the besieged city.

Reporting to Soviet headquarters in Budapest on Jan. 17, 1945, Wallenberg vanished into the Soviet Gulag. Although the Russians claim that Wallenberg died in 1947, the results of numerous investigations into his whereabouts remain inconclusive.

For more than 20 years, U-M has awarded its Wallenberg Medal annually to a humanitarian who has devoted his or her life in service to others.