If global warming is real, why was it so cold and snowy last winter? 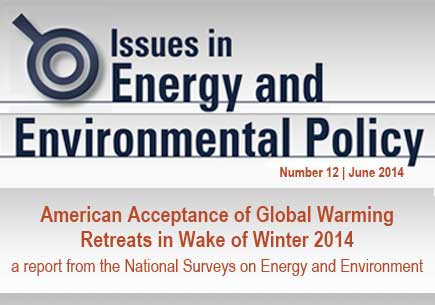 ANN ARBOR—More Americans view global warming by what they see outside their windows and not scientific evidence, according to a University of Michigan survey.

While a majority of Americans still believe that global warming is occurring, the cold and snowy winter of 2014 created more disbelievers, according to the National Surveys on Energy and Environment.

The survey is a joint effort of the Center for Local, State, and Urban Policy at U-M’s Ford School of Public Policy and the Muhlenberg Institute of Public Opinion at Muhlenberg College in Allentown, Pa.

American Views on the Existence of Global Warming: 2008-2014 | Create Infographics

“This decline is significant because it comes after more scientific evidence detailing the effects of climate change has been released to the American public,” said Barry Rabe, U-M professor of public policy and director of the Center for Local, State, and Urban Policy.

Against this apparent disconnect, the Obama administration continues to advance climate change policies through executive actions including the recently released regulations on coal-burning power plants.

“The divide in public opinion on global warming could complicate implementation of proposed federal efforts to address this issue,” Rabe said.

While 55 percent of Americans think temperatures have gone up over the past four decades, this marks the lowest level recorded in the survey since spring 2011. One in three Americans surveyed said there is no solid evidence of global warming.

And 38 percent of those who do not believe global warming is happening attributed this belief to their personal observations of weather.

The random telephone survey of 798 American adults was conducted March 24-April 9, 2014. The survey had a margin of error of 3.5 percent.