ANN ARBOR—It’s day time in Thailand and a group of eight people wearing dust masks and wool gloves sit around a large pile of discarded metal items. The workers hammer, drill and cut pieces of broken fans, motors and other equipment to get to some of the valuable components within.

In Chile, in the outskirts of the southern city of Temuco, a man using pieces of wood starts a grill before wrestling a tangle of wires onto it to burn the plastic off the copper he will then sell by weight. 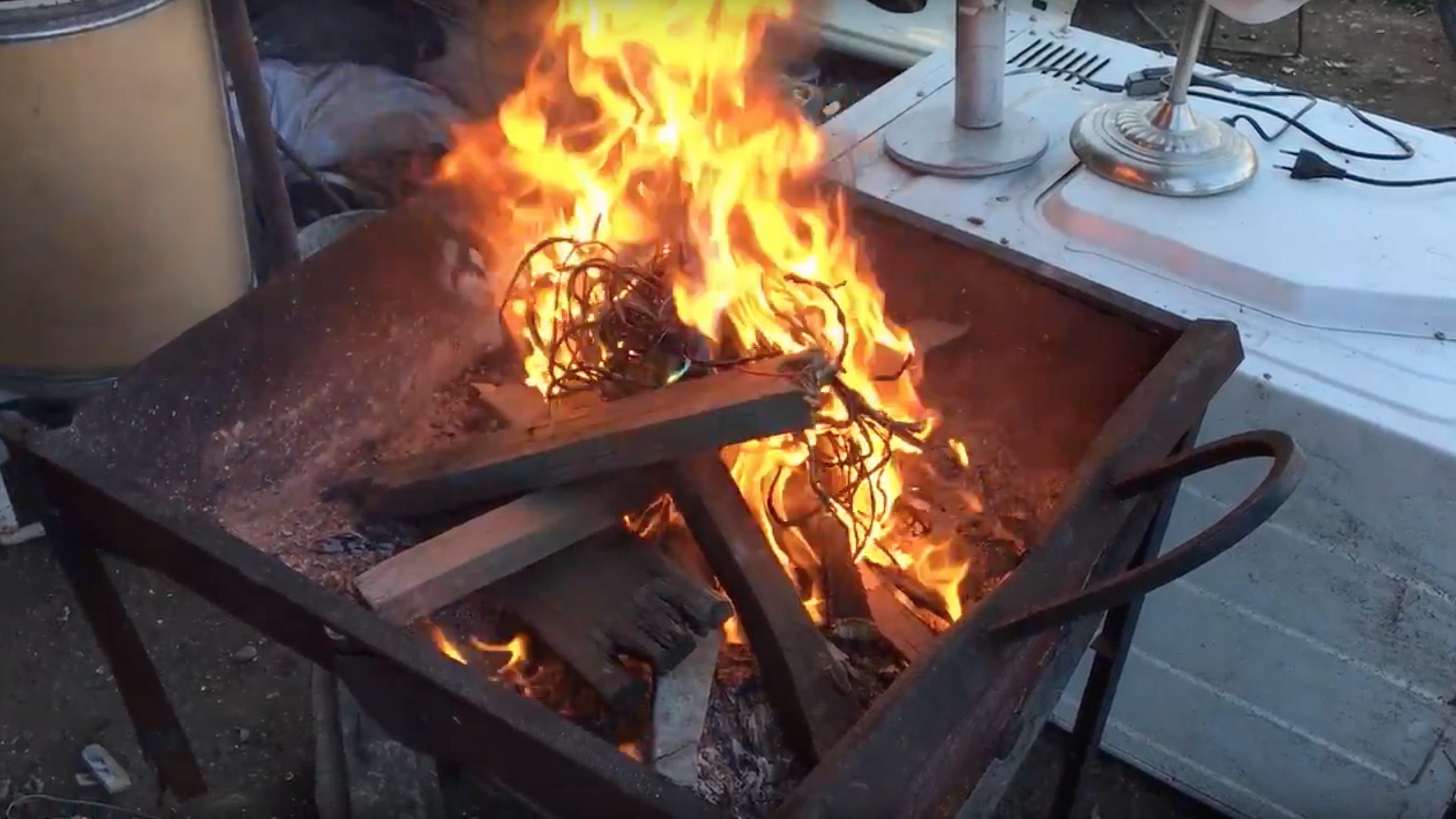 To get to the copper within, wires are burned in a grill in Santiago, Chile.

In both countries, and many others, earnings from the recycled materials will make a significant financial difference in the lives of these electronic waste recyclers, allowing them to pay for their children’s school supplies, keep their farms or feed their families, says Rick Neitzel, associate professor and director of the Exposure Research Lab at the University of Michigan’s School of Public Health.

For the last two years, Neitzel and his team of health workers, university faculty and students in both Thailand and Chile, as well as U-M public health and engineering students, have been studying e-waste recycling in order to identify the health hazards workers might face and help them improve their working conditions. His work has largely been funded by U-M’s Graham Sustainability Institute.

This week, Neitzel is bringing students from across campus—including the College of Engineering, School for Environment and Sustainability, School of Public Health and Ross School of Business—to bring students together to come up with ideas, tools, resources and policies to engage consumers in issues surrounding the recycling of e-waste in an event called “Design Jam.” 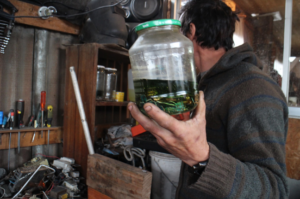 An e-waste worker holds up a printed circuit board that’s been put in an acid bath for dismantling in Chile.

“Consumers in high-income countries such as the U.S. are major contributors to this fast-growing waste stream but are often not aware that their behaviors are creating health and environmental issues for informal e-waste workers around the world,” Neitzel said.

Neitzel was working on a different project focusing on the health effects from small scale and artisanal gold mining in Ghana when he found out about e-waste workers’ deplorable working conditions there (read the mining story here).

“People were doing really difficult work, clearly barely making enough money to scrape by. And I thought this is where I can make an impact and work with people to improve their conditions while making sure they still had jobs,” he said.

To study recyclers’ working conditions, Neitzel’s team collected blood and urine samples to test for metals and other contaminants; tested for noise, water and air pollution, as well as workers’ lung function; and gathered data about workers’ experience, health and concerns related to e-waste recycling.

“If you have the choice, say, to recycle a television set or a refrigerator, which one of those might be worse for you to recycle in terms of your health? And which one will you make more money from?” he said. “We want to go back and work with them and be able to say, ‘Maybe recycling this particular product is not a good idea because it has a lot of lead and is going to make you sick, and you can make more money from this other product and protect your health at the same time.'” 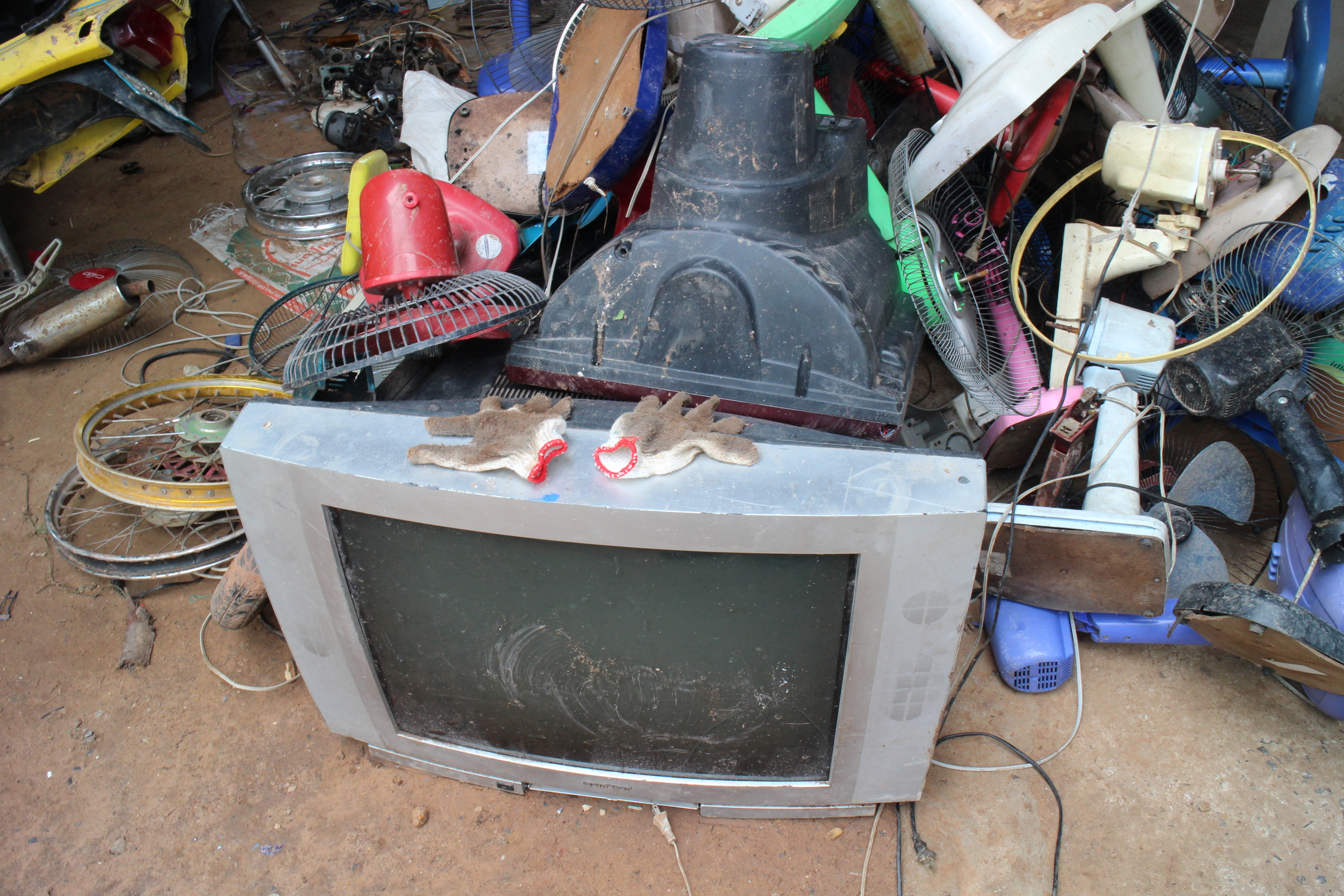 A pile of discarded electronic items that will be broken down to separate the valuable pieces within them.

Since the group is interested in coming up with solutions in collaboration with the workers, they also discussed with them what they see as their own concerns about their health. But a big part of that work is becoming familiar with the culture they’re working with, the researchers say.

For example, in Thailand, the second something stops working the recycling workers start to take it apart, but in Chile, there’s a robust culture for repairing items, Neitzel says. 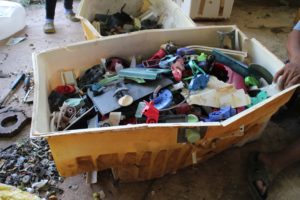 “It’s quite fascinating to see people in pretty much the same socioeconomic status approaching broken electronics differently,” he said. “The Thais seem to have concluded that ‘it’s not worth our time to fix this stuff or we don’t know how to fix it,’ while the Chileans have educated themselves on how to fix things because they figure they can make more money selling a product than selling recycled copper and aluminum.”

The workers also have different models to run their businesses, Neitzel says. While most of the work in Chile takes place at workshops or local markets, in Thailand, the work is done in people’s homes, either by individual families or by groups of workers gathered around a pile of e-waste, taking items apart, with children and pets roaming about. In Thailand, different households have also “specialized,” so that one might recycle only fans, another television sets and yet another refrigerators. 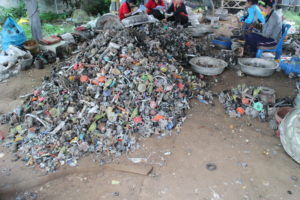 Some e-waste recyclers focus on taking fans apart in Thailand, separating metal and plastic components for resale or recycling.

“Our goal is to help them establish healthier work practices,” said Aubrey Arain, a doctoral candidate in environmental health sciences. “That might mean moving where you work farther away from where you’re cooking. It might mean keeping pots covered instead of cooking rice right next to where you are working, limiting where children can move in the home.

“We’re working with the community to determine not only who would be willing to participate in this, but also what we might feasibly be able to design with their input.”

Suzanne Chou, a U-M doctoral student in engineering, says that for workers in Thailand, being able to be home is a big plus, and understanding that will help come up with solutions that might be applicable to that setting.

“In some places, the family is all working together and take breaks and chat with each other,” she said. “They value the extra money, having more freedom, but they also seem to value that they can do this work from home.”