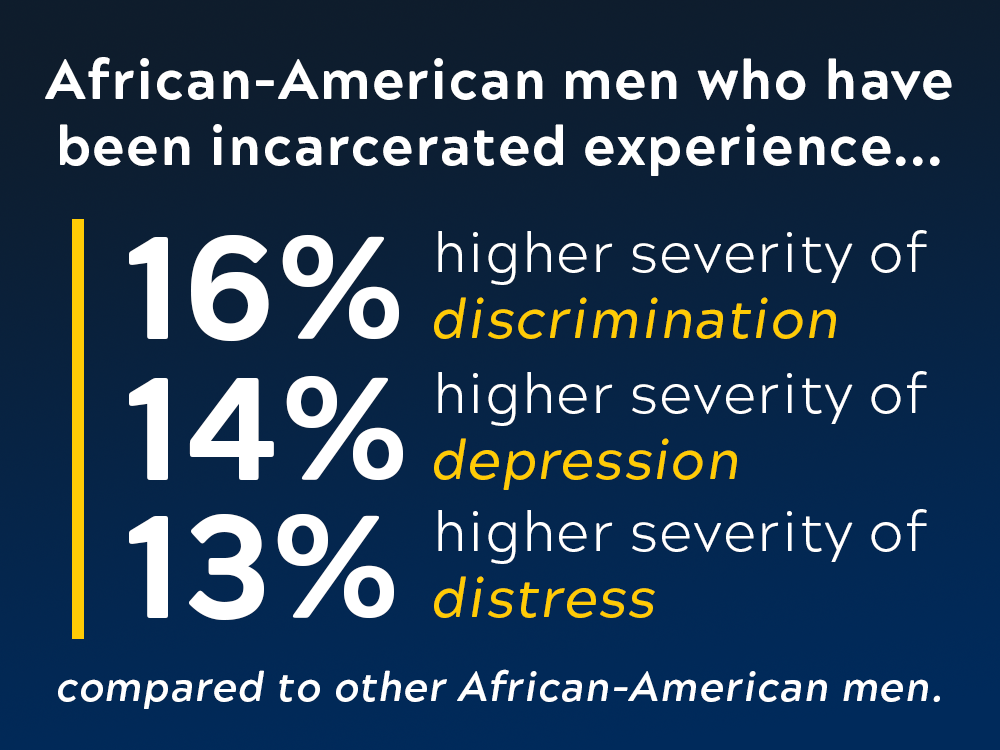 ANN ARBOR—African-American men who have spent time behind bars show worse mental health conditions compared with men of the same race with no history of incarceration, according to a new U-M study.

Researchers from U-M, Rutgers University and Texas A&M University found an association between African-American men with a history of incarceration and mental health, with mental health being defined as psychological distress and depressive symptoms.

Compared to other African-American men, those who have been incarcerated have 14 percent, 13 percent and 16 percent higher severity of depression, distress and discrimination, respectively.

Assari and team analyzed data from the National Survey of American Life, conducted by the U-M Institute for Social Research from 2001 to 2003. The NSAL is a representative survey of African-Americans, non-Hispanic whites and black Caribbeans.

“While most other national studies draw blacks from predominantly white areas, the NSAL has mostly enrolled blacks in the geographic places that they actually live,” Assari said. “So, the results are more accurate and valid than other sister studies.”

Assari noted that this survey also is distinctive because it only looked at African-American males.

“Demographic groups should not be lumped together, as life experiences and contextual factors are unique among them. In the U.S., life experiences are not only shaped by race or gender, but also their intersections,” Assari said.

Out of all African-American male participants in the NSAL, nearly 27 percent reported a lifetime history of incarceration.

The researchers acknowledge both public policy and service provider implications of their research. The U.S. is a global leader in incarceration rates, and according to the researchers, policymakers have become increasingly aware that this is detrimental to the country.

“The message to the policymakers is that psychological costs of incarceration do not end at when the individual is released,” Assari said. “The individual is stigmatized and experiences more discrimination, which will take its toll on the individual as well as society. There is also a message to social workers and those who work with African-American men. Incarceration history is a major risk factor for their mental health, and those with such history need extra help.”

The research is published in the Journal of Racial and Ethnic Health Disparities.