Inclusive play: U-M art professor leads creation of interactive game for kids with and without disabilities

ANN ARBOR—While adaptive sports like powerchair football provide invaluable opportunities for children with mobility disabilities to participate in athletic events, these games are not designed for competitive play between kids with disabilities and those without.

A media artist inspired by a young sports enthusiast with cerebral palsy is looking to change that.

The goal of iGYM, an augmented reality game system created by a team of University of Michigan researchers led by Roland Graf, associate professor at U-M’s Penny W. Stamps School of Art & Design, is to create a truly inclusive environment for children to play and exercise together.

The current implementation of the system resembles soccer—or a life-size game of air hockey—with a court projected on the floor by two ceiling-mounted projectors and a goal on either side. Upon entering the field, an overhead computer vision camera detects each player and surrounds them with a “peripersonal circle,” which they can use to hit a projected ball or puck toward the other player’s goal.

Players can expand their circle to “kick” the ball by extending their arms, physically kicking or by pressing a “kick-button” mounted on their body. This simple circle-expanding functionality creates an equitable play experience for kids with mobility disabilities and their peers without disabilities. 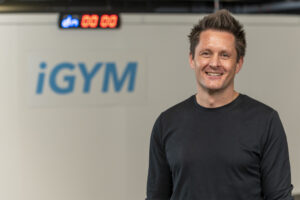 The iGYM system was inspired by James Falahee, a teen who uses a power wheelchair. Graf met Falahee through physical therapist Betsy Howell while seeking feedback on the potential of an earlier technology that he invented as part of Solar Pink Pong, an interactive art installation and street video game.

“James was interested in this project from a sports perspective,” Graf said. “This started our iGYM development effort and our effort to focus on the design space of inclusive play.”

“I think that the iGYM is very cool,” Falahee said. “My experience has been very good so far. I have even been allowed to invite friends to play with me. I think that the chance for disabled people to be able to participate in sports is very important because throughout most of my life I have been forced to sit on the sidelines and watch my friends play sports and games.”

Howell also recruited the Kreps family for iGYM “play-testing” as part of a pilot study. Brothers Darren (age 10), Bryan (9) and Henry (6) have enjoyed playing against each other and with other kids in the study. Bryan uses a wheelchair or walker and Henry has limb differences. Though Darren does not have a mobility disability, he has also experienced health complications requiring two open heart surgeries.

“One of the things that’s very interesting about this project is, all kids, or all people, have a competitive spirit at different levels,” said Erik Kreps, the boys’ father.

He said that Bryan, the second youngest of nine brothers and sisters, would see his older siblings playing soccer and basketball and wanted to join in.

“As he got older, he grasped that he wouldn’t have the same opportunities because he’s in a walker and has a wheelchair,” Kreps said.

“My favorite part is that it’s kind of equalized between Bryan and Darren,” said Sandy Kreps, the boys’ mother. “And I think the kids feel like they’re in a video game.” 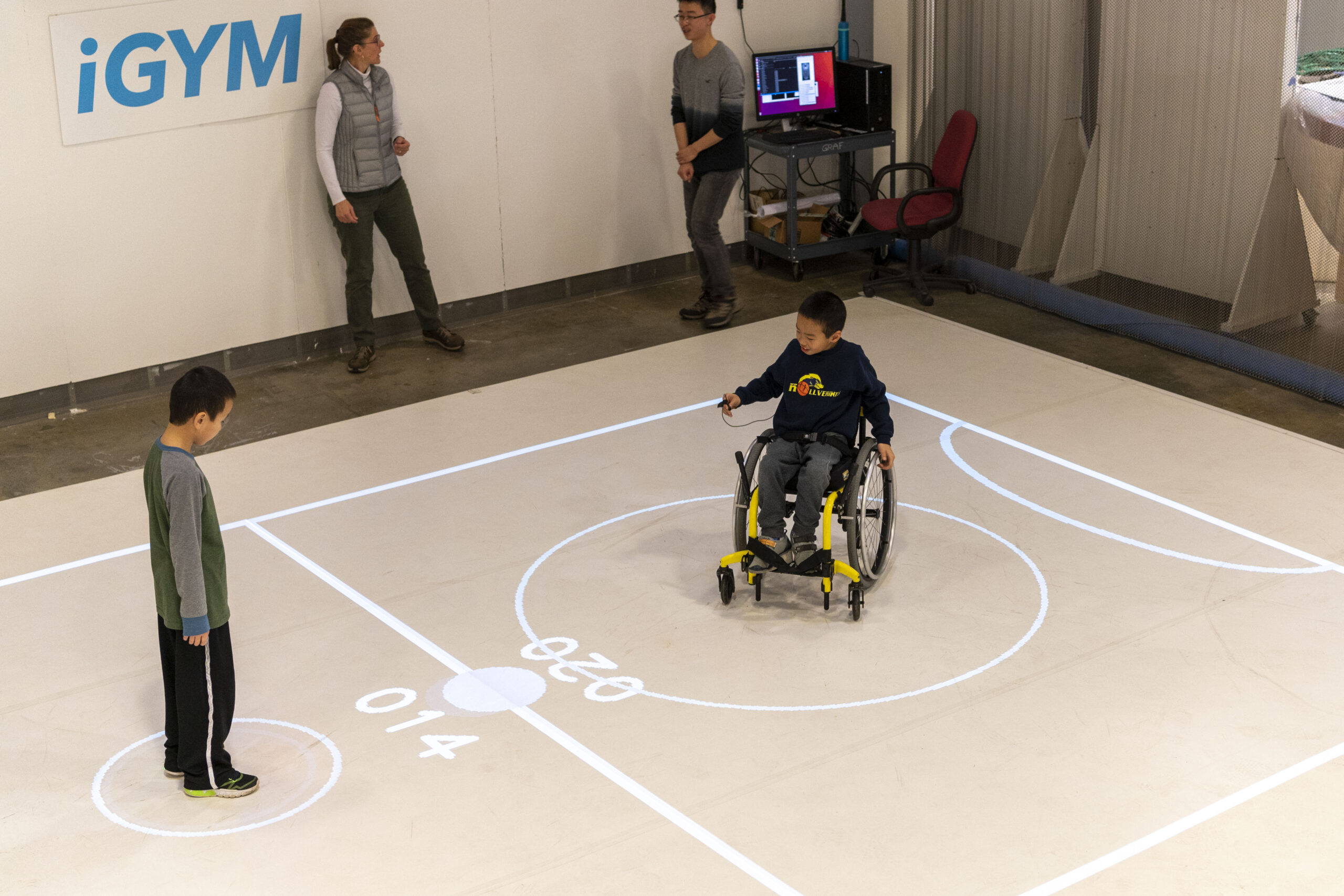 Darren Kreps (left) and his brother Bryan Kreps participate in a “play test” of iGym, an augmented reality system created by a multidisciplinary team at the University of Michigan that promotes inclusive play and exercise. Image credit: Roger Hart/Michigan Photography.

Feedback from children participating in iGYM’s development and their parents has continued to shape the augmented reality platform. The kids found the game fun and competitive regardless of their level of mobility, and those with mobility disabilities liked that it could be played without additional equipment.

Further, the children not only enjoy the game but also feel good about their role in the project.

“I think that it is a great honor,” Falahee said. “The game will bring so much fun to so many people and to think that I was a part of it is such a privilege.”

As Graf and iGYM’s interdisciplinary team of researchers and students from U-M’s schools of Engineering, Kinesiology and Information continue to refine the algorithm behind the game, they are testing out new features.

The most recent edition included red and green targets, which, when players hit them with the puck, temporarily removes the corresponding goal. As Bryan Kreps described it, “if it hits the green, the green side will go poof and they can’t score on you.”

In the future, the iGYM platform may be used for games other than air hockey—Graf is interested in developing an interactive obstacle course or human-size Pac-Man game.

With an excitingly fresh meld of video games and traditional sports, it’s perhaps unsurprising that as playtesting has continued, the children have grown increasingly thrilled for opportunities to play iGYM, the researchers say.

“It’s been really rewarding to see a lot of these kids who didn’t know each other before say, ‘Oh, I want to play with him again,'” Whitesall said.

According to Graf, iGYM is entirely unique.

“Currently there is nothing like iGYM,” he said. “Other accessible gaming technologies are either limited to small screens or developed for people with cognitive disabilities.” 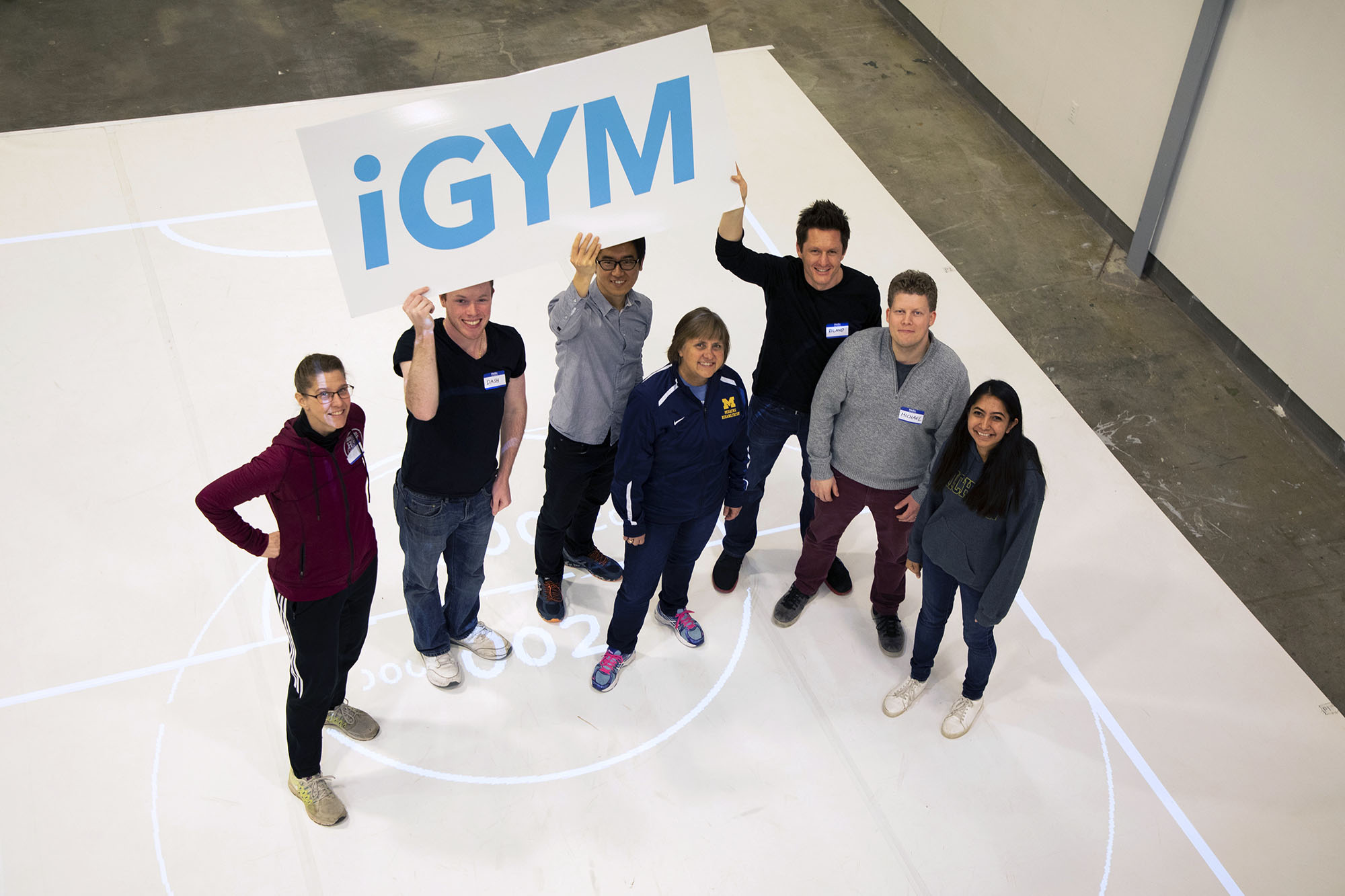 iGYM currently exists as a research prototype supported by the U-M Exercise & Sport Science Initiative, but Graf and the research team are seeking partners to bring the system to market.

“Our vision with the system is to make it as simple and affordable as possible so it can be installed and switched on like any video projector or light fixture in a school gym or community center,” Graf said.

While further work is necessary before iGYM is ready for broad distribution, Graf says that implementing the system does not require custom hardware and is mostly a software engineering challenge that comes down to finding the best approach to scale up the platform, potentially using open source models.

“It’s not science fiction,” he said. “This kind of inclusive, augmented reality can really become a reality tomorrow.”