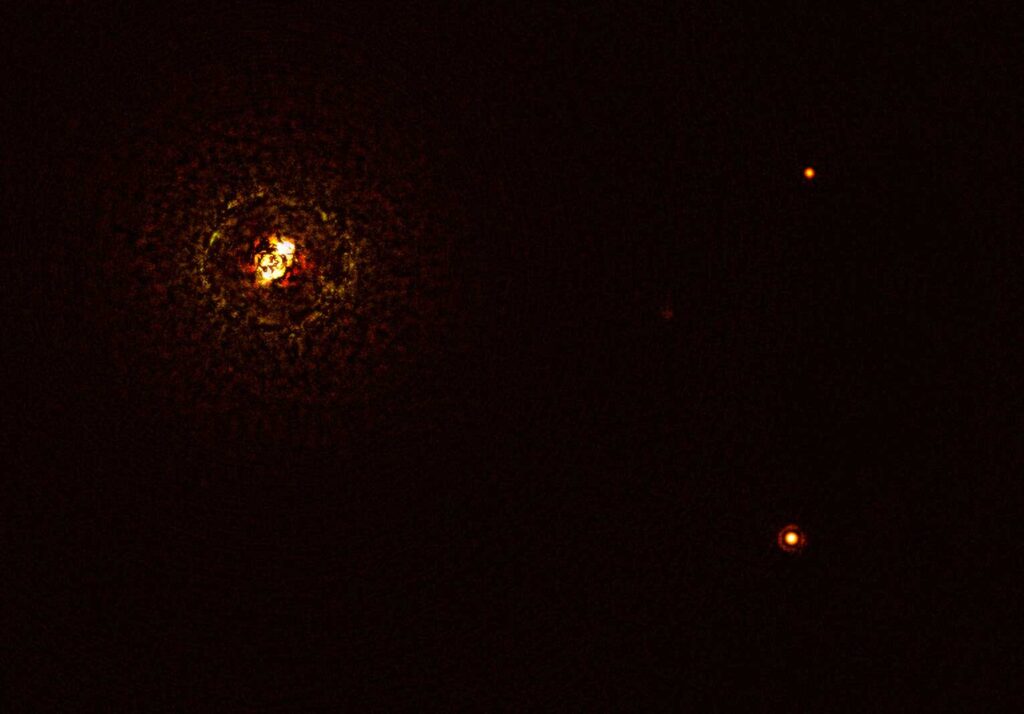 This image shows the most massive planet-hosting star pair to date, b Centauri, and its giant planet b Centauri b. This is the first time astronomers have directly observed a planet orbiting a star pair this massive and hot.The star pair, which has a total mass of at least six times that of the sun, is the bright object in the top left corner of the image, the bright and dark rings around it being optical artifacts. The planet, visible as a bright dot in the lower right of the frame, is ten times as massive as Jupiter and orbits the pair at 100 times the distance Jupiter orbits the sun. The other bright dot in the image (top right) is a background star. By taking different images at different times, astronomers were able to distinguish the planet from the background stars. The image was captured by the SPHERE instrument on ESO’s Very Large Telescope and using a coronagraph, which blocked the light from the massive star system and allowed astronomers to detect the faint planet. Image credit: ESO/Janson et al.

The European Southern Observatory’s Very Large Telescope has captured an image of a planet orbiting b Centauri, a two-star system that can be seen with the naked eye.

This is the hottest and most massive planet-hosting star system found to date, and the planet was spotted orbiting it at 100 times the distance Jupiter orbits the sun. Some astronomers believed planets could not exist around stars this massive and this hot—until now.

“It was quite a surprise, at least to me, to find such a small companion around such a massive host star. In fact, it poses quite a challenge to our models,” said Michael Meyer, University of Michigan astronomer and co-author a new study published online today in Nature. “But this is what makes it exciting—when you are proven wrong, you learn something.”

Located approximately 325 light-years away in the constellation Centaurus, the b Centauri two-star system (also known as HIP 71865) has at least six times the mass of the sun, making it by far the most massive system around which a planet has been confirmed. Until now, no planets had been spotted around a star more than three times as massive as the sun. 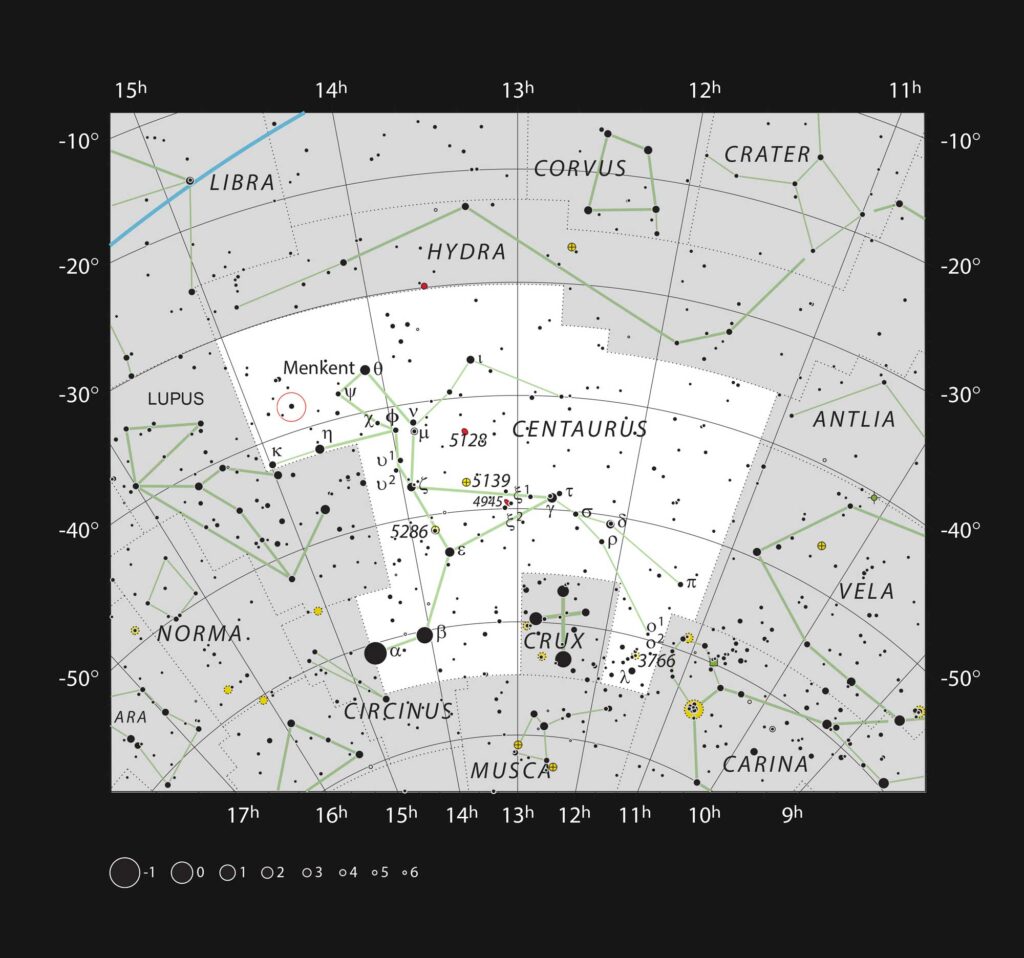 This chart shows the location of the b Centauri system, the most massive and hottest planet-hosting star pair to date. This map shows most of the stars visible to the unaided eye under good conditions and the system itself is marked with a red circle. Image credit: ESO, IAU and Sky & Telescope

“Finding a planet around b Centauri was very exciting since it completely changes the picture about massive stars as planet hosts,” said Markus Janson, an astronomer at Stockholm University, Sweden and first author of the study.

Most massive stars are also very hot, and this system is no exception: Its main star is a so-called B-type star that is over three times as hot as the sun. Owing to its intense temperature, it emits large amounts of ultraviolet and X-ray radiation.

The large mass and the heat from this type of star have a strong impact on the surrounding gas, which should work against planet formation. In particular, the hotter a star is, the more high-energy radiation it produces, which causes the surrounding material to evaporate faster.

“B-type stars are generally considered as quite destructive and dangerous environments, so it was believed that it should be exceedingly difficult to form large planets around them,” Janson said.

But the new discovery shows planets can in fact form in such severe star systems.

“The planet in b Centauri is an alien world in an environment that is completely different from what we experience here on Earth and in our Solar System,” said co-author Gayathri Viswanath, a doctoral student at Stockholm University. “It’s a harsh environment, dominated by extreme radiation, where everything is on a gigantic scale: the stars are bigger, the planet is bigger, the distances are bigger.” 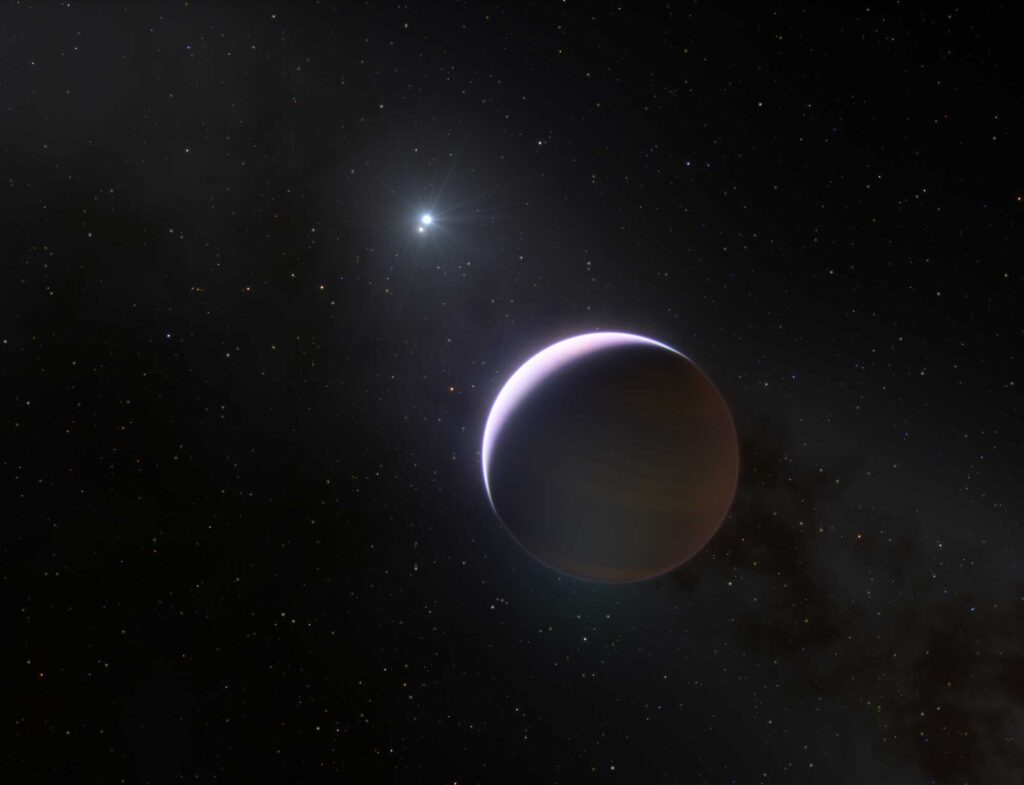 This artist’s impression shows a close up of the planet b Centauri b, which orbits a binary system with mass at least six times that of the sun. This is the most massive and hottest planet-hosting star system found to date. The planet is ten times as massive as Jupiter and orbits the two-star system at 100 times the distance Jupiter orbits the sun. Image credit: ESO/L. Calçada

Indeed, the planet discovered, named b Centauri (AB)b or b Centauri b, is also extreme. It is 10 times as massive as Jupiter, making it one of the most massive planets ever found. Moreover, it moves around the star system in one of the widest orbits yet discovered, at a distance a staggering 100 times greater than the distance of Jupiter from the sun. This large distance from the central pair of stars could be key to the planet’s survival.

Meyer contributed to the work by making predictions based on his demographic model of planets and very low mass brown dwarf companions, which form like stars. This model takes into account host star mass, as well as orbital separation. Meyer’s predictions showed that the planet orbiting b Centauri was more likely to be formed from planet-like processes than star-like processes.

These results were made possible due to the sophisticated Spectro-Polarimetric High-contrast Exoplanet REsearch instrument (SPHERE) mounted on ESO’s VLT in Chile. SPHERE has successfully imaged several planets orbiting stars other than the sun before, including taking the first ever-image of two planets orbiting a sun-like star.

However, SPHERE was not the first instrument to image this planet. As part of their study, the team looked into archival data on the b Centauri system and discovered that the planet had actually been imaged more than 20 years ago by the ESO 3.6m telescope, though it was not recognised as a planet at the time.

With ESO’s Extremely Large Telescope, due to start observations later this decade, and with upgrades to the VLT, astronomers may be able to unveil more about this planet’s formation and features.

“It will be an intriguing task to try to figure out how it might have formed, which is a mystery at the moment,” Janson said.