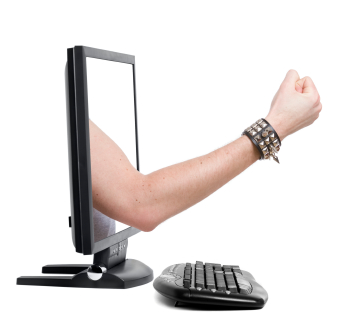 A new University of Michigan study reports that, in addition to carrying guns, gang members have armed themselves with social media sites such as Twitter, Facebook and YouTube to incite dares, trade insults or make threats that may result in homicide or other crimes.

Researchers have described this new interaction as “Internet banging.” They examine several factors, including the role of hip-hop music in this phenomenon and urban masculinity’s influence on social media behavior.

Desmond Patton, assistant professor of social work, said it’s unclear if Internet banging only involves males or one ethnic group. However, gang-related violence disseminated over social media appears to be a male-dominated behavior that is shaped by fewer employment opportunities for minorities.

Youth gang members are similar to their non-gang peers regarding online behavior in terms of feeling more positive about themselves using the Internet compared with the real world. The groups differ in using the Internet for posturing.

“Many gang members, usually those who are new, are interested in making a name for themselves which leads to bragging about acts of violence or crimes that they may not have committed,” Patton said.

Using the Internet allows gang members to promote their affiliation and share information about rival gangs.

The researchers also examined hip-hop music, which they characterize as the rebellious, assertive voice of urban youth, males in particular. Patton said it’s this identity, along with unemployment and poor educational opportunities, that fuels the behavior of some African-American men.

“In social media, the hip-hop identity has found the optimal playground to perpetuate and replicate itself because of its public nature,” he said.

In addition, male gang members who use the Internet can express their masculinity and be recognized in a public forum.

“It gives them a place to seek public love and recognition of their manhood, a reinforcement of self they receive in few other places,” Patton said.

The study’s other authors were researchers Robert Eschmann and Dirk Butler of the University of Chicago.