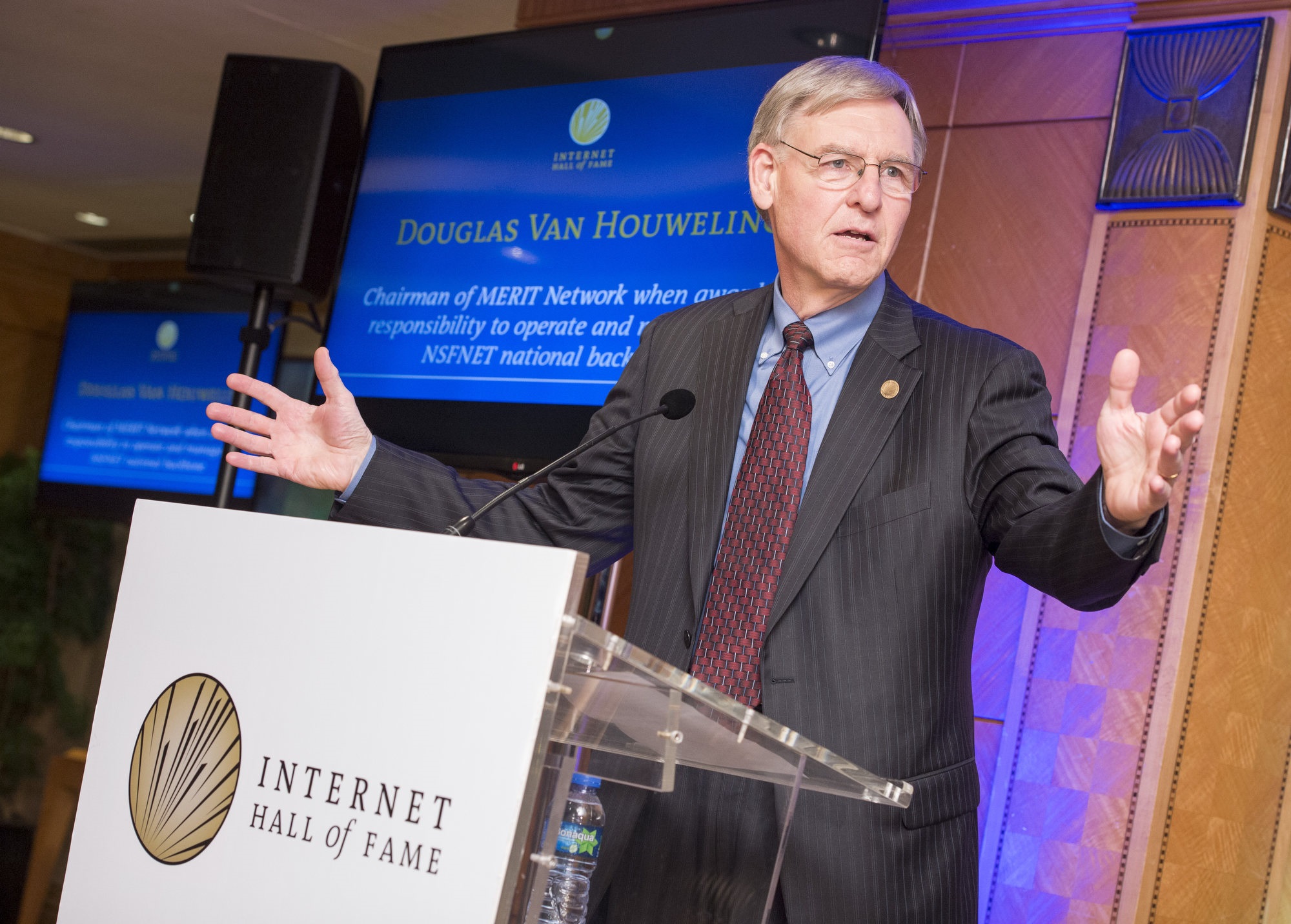 Speaking to the assembly at the induction ceremony. Image credit: The Internet SocietyANN ARBOR—For about a decade that ended in the mid-1990s, the fledgling Internet ran out of Ann Arbor and the University of Michigan. Now a School of Information professor who played a key role in bringing that early web to life has been inducted into the Internet Hall of Fame.

Douglas Van Houweling, professor and associate dean for research and innovation, is one of 24 honored today in Hong Kong by the Internet Society, a nonprofit that aims to protect the web’s open platform.

Van Houweling was instrumental in forming a public/private partnership in the late 1980s to operate NSFNET, the high-speed network connecting the National Science Foundation’s supercomputing centers that eventually became the Internet we know today.

At the time, he served as vice provost for information and technology at U-M, as well as chairman of the board of Merit Inc., a nonprofit statewide computing network whose members are the public universities in Michigan. Van Houweling brought in IBM, MCI and the Michigan Strategic Fund to work with the universities on the project and secured a $39 million grant from NSF to engineer and operate the high-speed network.

“It is hard to remember today that only 30 years ago there was no public Internet, just a nascent set of connected research networks,” said Jeffrey MacKie-Mason, dean of the U-M School of Information. “Doug Van Houweling was a visionary leader who led the university-government-industry partnership that built and managed the first-ever U.S. national backbone, the NSFNET, which enabled exponential Internet growth, and remarkably fast and successful transition from a small, risky research dream to the core public communications infrastructure that it is today.”

During NSFNET’s tenure, Internet traffic and connectivity grew more than 400 percent per year for seven years, said Larry Landweber, professor emeritus of the University of Wisconsin, who nominated Van Houweling for this award.

Van Houweling went on to serve as the founding CEO of Internet2, the national research and education network for the United States. He was inducted as a ‘global connector,’ a category that recognizes and celebrates individuals from around the world who have made major contributions to the growth, connectivity and use of the Internet, either on a global scale or within a specific region or community.