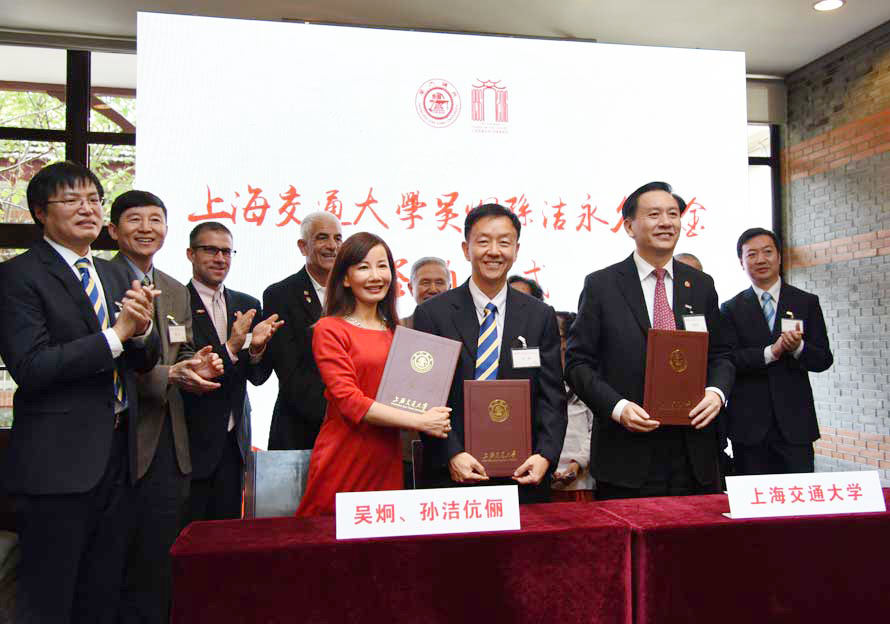 The gift to the Shanghai-based Joint Institute will establish the John Wu and Jane Sun Endowment Fund, which will support professorships, faculty awards, scholarships, student entrepreneurship funds and other programs.

“The University of Michigan and Shanghai Jiaotong University provided me with deeply meaningful educational opportunities. Jane and I are delighted to support the Joint Institute, and we look forward to the continued success of students and faculty.” said Wu, who earned a Bachelor of Science in computer science with high distinction in 1989 at U-M before serving in senior positions at Yahoo! and the Chinese e-retailing giant Alibaba.

Founded in 2006, the Joint Institute has become an important model for academic joint ventures in China. In 2014, the collaboration won the IIE Andrew Heiskell Award—one of the highest honors in global higher education—for best practices in international partnerships. It was the first time a U.S.-China collaboration won the award in the category. This is one of several joint initiatives U-M has throughout the world, including joint health initiatives in Ghana and Ethiopia, as well as an initiative in India.

The Joint Institute is located on the campus of Shanghai Jiao Tong University, one of China’s leading universities. More than 1,280 students study mechanical or electrical and computer engineering at the Joint Institute. All courses are taught in English by 32 tenure-track faculty members and 17 full-time lecturers.

Hundreds of Joint Institute students have transferred to U-M through dual-degree programs, and the Shanghai program has been a popular destination for hundreds of U-M students seeking an education-abroad experience in China.

A native of Shanghai, Wu studied at SJTU before earning his degree at U-M. He headed Yahoo!’s search and e-commerce technology engineering team from 1996-99 and served as the chief technology officer at Alibaba in 2000-07.

Wu was a venture partner at Northern Light Venture Capital in 2008-10 and co-founded F&H Fund Management in 2010. He was named China Angel Investor of the Year in 2014 by the Chinese edition of Entrepreneur. Jane Sun is the co-president and chief operating officer of Ctrip.com, a leading travel service provider in China.

In recognition of the couple’s generosity, the new U-M-SJTU Joint Institute Academic and Laboratory Complex, currently under construction, will be named the “Long Bin Building” in honor of Mr. Wu’s parents, longtime faculty members at SJTU.