Kids with Down syndrome who bike ride are less sedentary overall

ANN ARBOR—Children with Down syndrome who learned to ride a two-wheel bike were less sedentary overall and had less body fat one year after learning to ride compared to those who did not participate, a University of Michigan study shows.

The first results from a two-year study of the feasibility and benefits of teaching children with Down syndrome to ride bikes appear in the October issue of the Physical Therapy Journal.

Results showed that 56 percent of the 61 study participants in the U-M School of Kinesiology Down syndrome bike training study learned to ride a two-wheel bike unassisted after 75 minutes a day of individualized training for five consecutive days, said Dale Ulrich, professor of movement science and study author. After a few tweaks, subsequent bike camps showed even more success, with 65 percent learning to ride.

Researchers measured participants’ level of physical activity prior to training, at seven weeks and then one year after the camp, and found that kids who learned to ride reduced their sedentary behavior by 75 minutes a day. 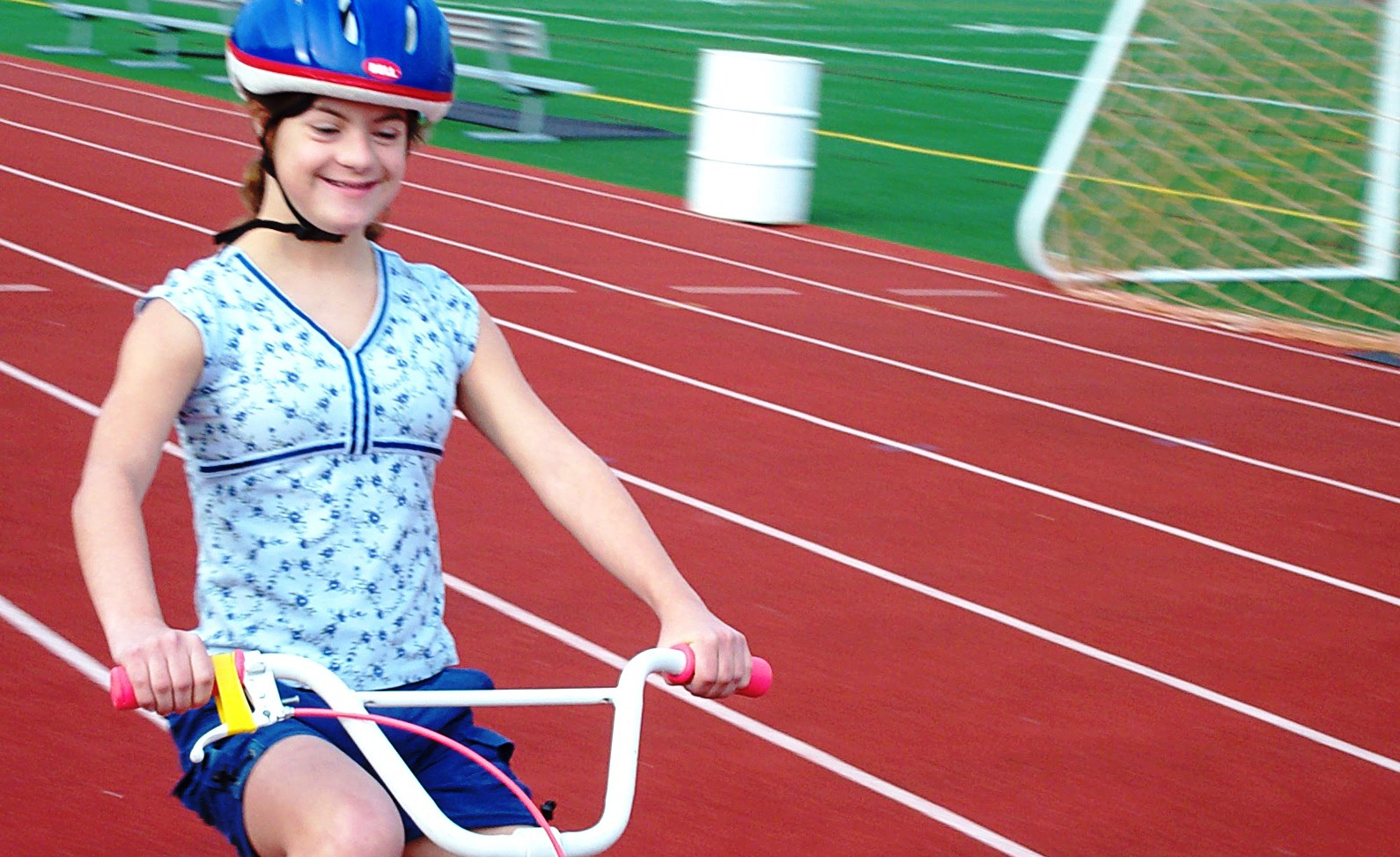 University of Michigan School of Kinesiology bike camp participant Bridget Richards zooms around happily on her two-wheel bike. Richards was part of the ‘bike camp’ study conducted by U-M Kinesiology. The study looked at the feasibility and benefit of teaching children with Down syndrome to ride two-wheel bikes. U-M Kinesiology teamed with the nonprofit group Lose the Training Wheels, which provided the specially designed bikes and the individualized training. The majority of participants learned to ride after five consecutive days of 75 minute individualized training sessions. Photo courtesy of Greg and Mary Anne Richards“That’s a lot. That’s unbelievable. We were not expecting this large of a drop in sedentary activity,” Ulrich said. “It can’t be just because of riding a bike; this means they are getting involved with other activities. They overcome their fear of falling while riding a bike and as a result become more motivated to try other physical activities.”

Individualized training is key. Kids with Down syndrome have balance issues that fuel an intense fear of falling. “If you can develop training to overcome that fear, learning explodes,” Ulrich said.

The research has broad implications that apply to all individuals with learning constraints.

“Rather than trying to teach everything, you’ve got to be a lot more selective and identify activities that their peers are doing that will benefit them in many different ways,” Ulrich said. “Bike riding, swimming, martial arts, dance, those are all activities that I think are just perfect with individualized instruction.”

Ulrich’s lab partnered with Lose the Training Wheels, a Kansas-based nonprofit that holds bike training camps for mentally and physically challenged children throughout the United States and Canada, to provide the training and adaptive bikes.

During bike camp, new children begin riding in a gym on bikes designed by former professor Richard Klein and his students at the University of Illinois at Urbana-Champaign. The bikes are fitted with graduated back roller wheels about as wide as rolling pins. A handle off the back of the bike allows trainers to catch a rider before they fall. As the rider gains confidence and skill, the back wheels become more graduated and eventually the rider transitions to a regular two wheel bike and moves outside into a parking lot. By the end of the week, most of students are whizzing around without assistance, their parents and siblings screaming encouragement.

The current results are from bike camps in 2006-2007 in Grand Rapids and Ann Arbor. A new three-year study that began in 2009 monitors the frequency of riding after leaving camp and follows the activity of participants, as well as measuring socialization and community participation, Ulrich said. The expanded research includes children with autism, and so far the success rate for autistic children learning to ride a two-wheeled bike is a whopping 80 percent.

Ulrich is always amazed at how infrequently the children fall. “I’m always fearful, yet year after year after year we don’t have many falls, and we’ve never had a serious fall.”

The University of Michigan School of Kinesiology continues to be a leader in the areas of prevention and rehabilitation, the business of sport, understanding lifelong health and mobility, and achieving health across the lifespan through physical activity. The School of Kinesiology is home to the Athletic Training, Movement Science, Physical Education, and Sport Management academic programs?bringing together leaders in physiology, biomechanics, public health, urban planning, economics, marketing, public policy, education and behavioral science. Visit http://www.kines.umich.edu/ for more information.