Know how much you’re texting while driving? U-M study says no 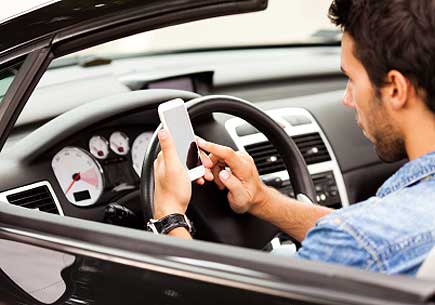 ANN ARBOR—Texting while driving is a serious threat to public safety, but a new University of Michigan study suggests that we might not be aware of our actions.

U-M researchers found that texting while driving is predicted by a person’s level of “habit”—more so than how much someone texts.

When people check their cell phones without thinking about it, the habit represents a type of automatic behavior, or automaticity, the researchers say. Automaticity, which was the key variable in the study, is triggered by situational cues and lacks control, awareness, intention and attention.

“In other words, some individuals automatically feel compelled to check for, read and respond to new messages, and may not even realize they have done so while driving until after the fact,” says Joseph Bayer, a doctoral student in the Department of Communication Studies and the study’s lead author.

This first-of-its-kind study, which identifies the role of unconscious thought processes in texting and driving, is different from other research that has focused on the effects of this behavior. Thus, the current study investigates the role of habit in texting while driving, with a focus on how (rather than how much) the behavior is carried out.

“A texting cue, for instance, could manifest as a vibration, a ‘new message’ symbol, a peripheral glance at a phone, an internal ‘alarm clock,’ a specific context or perhaps a mental state,” Campbell says. “In the case of more habitual behavior, reacting to these cues becomes automatic to the point that the person may do so without even meaning to do it.”

In the study, several hundred undergraduate students responded to a questionnaire asking about their perceptions and uses of various aspects of mobile communication technology. They were asked about the level of automaticity and frequency of texting, as well as norms and attitudes toward texting and driving.

The findings show that automatic tendencies are a significant and positive predictor of both sending and reading texts behind the wheel, even when accounting for how much individuals text overall, norms and attitudes.

“Two mobile phone users, then, could use their devices at an equal rate, but differ in the degree to which they perform the behavior automatically,” Campbell says.

Bayer says the implications of the study may help provide solutions to texting and driving.

“Campaigns to change attitudes about texting while driving can only do so much if individuals don’t realize the level at which they are doing it,” Bayer says. “By targeting these automatic mechanisms, we can design specific self-control strategies for drivers.”

Despite these findings, the researchers say more work is needed to determine if the results are consistent across age groups rather than young adults.

The findings appear in the journal Computers in Human Behavior.