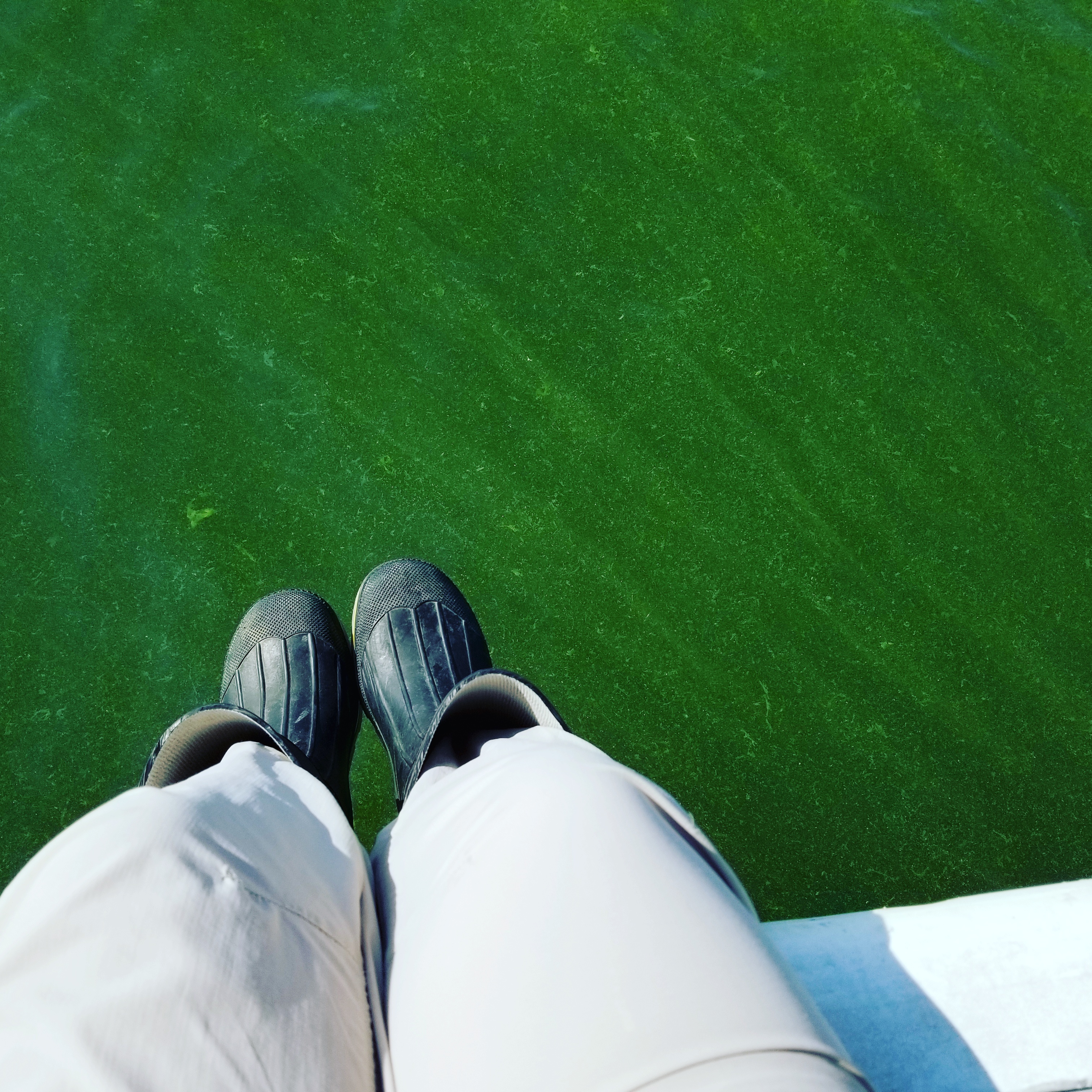 ANN ARBOR–Western Lake Erie’s annual summer algal blooms are triggered, at least in part, by cyanobacteria cells that survive the winter in lake-bottom sediments, then emerge in the spring to “seed” the next year’s bloom, according to a research team led by University of Michigan scientists.

The findings advance scientists’ understanding of the basic biology driving the annual summer blooms, which are both an unsightly nuisance and a potential public health hazard. In addition, the work identifies a mechanism to explain the rapid increase in Lake Erie bloom size and spatial extent in early summer. 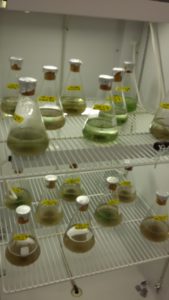 “The study suggests that the initial buildup of blooms can happen at a much higher rate and over a larger spatial extent than would otherwise be possible, due to the broad presence of viable cells in sediments throughout the lake,” said study lead author Christine Kitchens, a research technician at the Cooperative Institute for Great Lakes Research (CIGLR) at U-M.

“These overwintering cells can quickly be entrained within the water column—particularly after a storm event—and start actively growing.”

The study is scheduled for publication Nov. 21 in the journal PLOS ONE. Kitchens conducted the work for her master’s thesis at the School for Environment and Sustainability. The other authors are Thomas Johengen, associate director of CIGLR, and Timothy Davis, an associate professor at Bowling Green State University.

Western Lake Erie has long been plagued by harmful algal blooms, or HABs, fueled largely by nutrients in agricultural runoff. The blooms are composed largely of Microcystis, a genus of colony-forming cyanobacteria that sometimes produce liver toxins called microcystins.

Lake Erie is a drinking water source for 11 million people. In 2014, a cyanobacteria bloom infiltrated the Toledo water intake, resulting in a two-day “do not drink” advisory for more than 400,000 people.

This year’s bloom was relatively small and fell short of scientists’ predictions. Johengen said scientists should consider incorporating the new information about overwintering Microcystis cells into the computer models used to make the annual bloom forecasts. 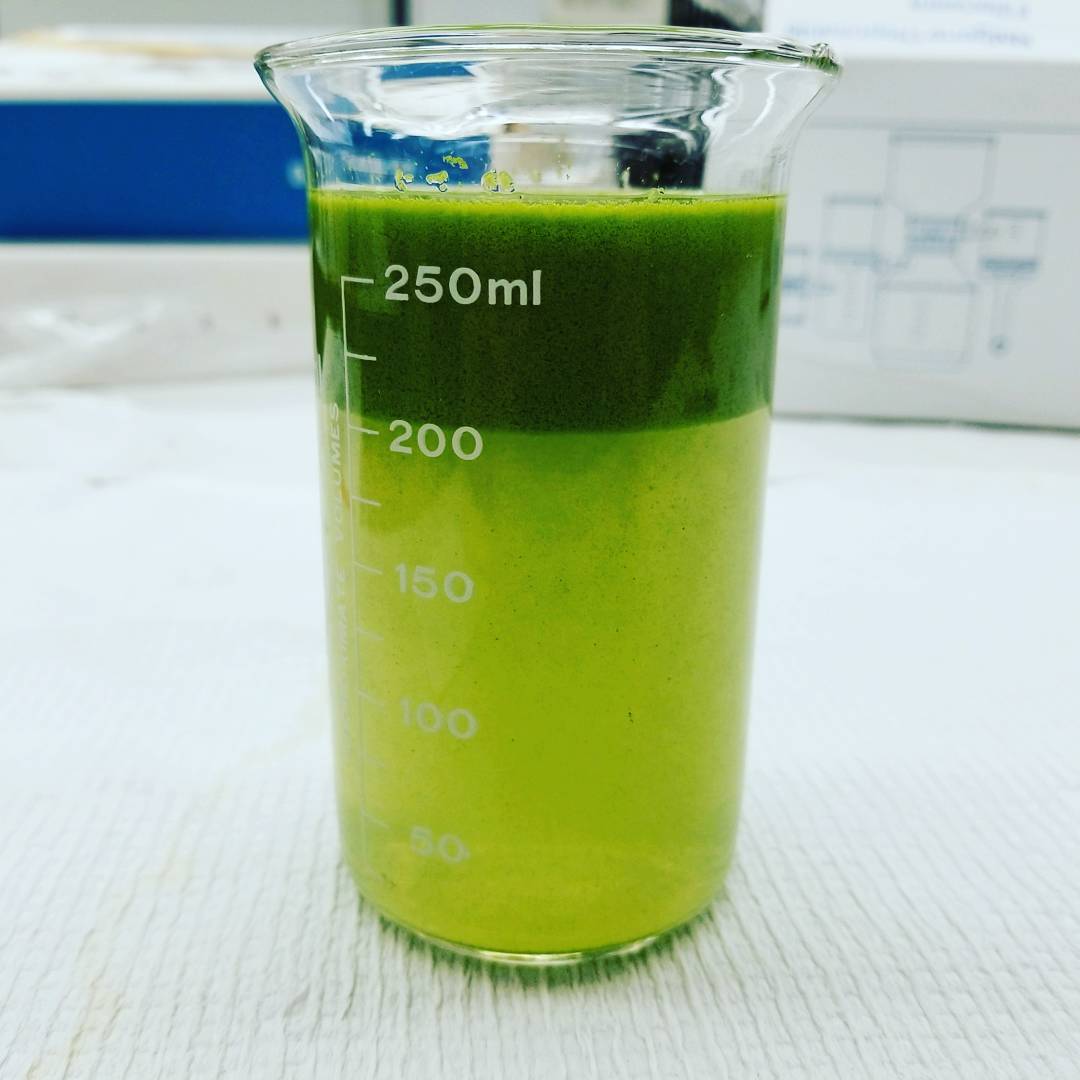 Previous studies of other temperate lakes around the world indicate that overwintering populations of Microcystis cells possess high survivability and can seed seasonal blooms. However, the exact contribution of cells in sediments has been less clear.

For Lake Erie, one 2009 study concluded that the Maumee and Sandusky rivers were a potential source of the Microcystis cells—known to scientists as “inocula” because they inoculate the lake—that initiate the summer cyanobacteria blooms. But other work suggests that river populations do not seed the Erie blooms.

The new U-M-led study is believed to be the first to assess both the abundance and viability of overwintering Microcystis cells from sediments in the Great Lakes.

The researchers collected sediment-core samples at 16 sites covering 145 square miles in the portion of western Lake Erie where harmful cyanobacteria blooms are most prevalent and persistent. The sampling was done over a two-year period in water depths ranging from 10 to 30 feet. 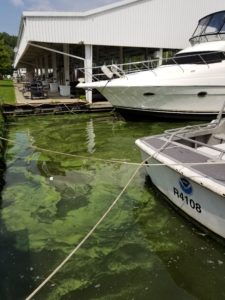 While Microcystis cell concentrations declined significantly over the winter, the cells that survived remained viable—meaning they were capable of growing—the following spring. In addition, the growth experiments showed that potentially toxic Microcystis strains were successfully cultured at a slightly higher rate than nontoxic strains.

That result could help explain a previous observation by the National Oceanic and Atmospheric Administration’s Lake Erie monitoring program: that the percentage of potentially toxic Microcystis cells is highest during the early stages of a bloom and declines throughout the summer.

Johengen said it’s not yet known whether overwintering Microcystis cells pick up vital nutrients from the sediments and use those nutrients to fuel their early season growth spurt. If that’s happening, it could complicate efforts to curb Lake Erie blooms by reducing fertilizer runoff from croplands, he said.

The study was funded through the federal Great Lakes Restoration Initiative. The Cooperative Institute for Great Lakes Research is supported by NOAA, and resources at the agency’s Great Lakes Environmental Research Laboratory in Ann Arbor were used for the study.

The paper is titled “Establishing spatial and temporal patterns of Microcystis sediment seed stock viability and their relationship to subsequent bloom development in Western Lake Erie.”