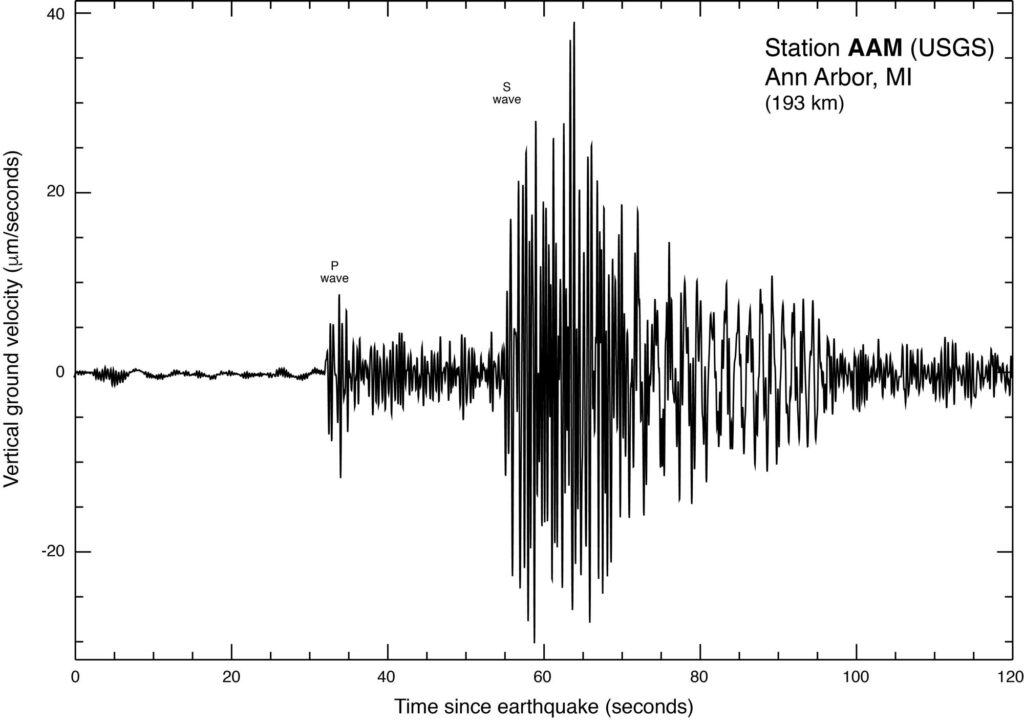 In June 2019, a magnitude 4.0 earthquake occurred beneath Lake Erie just off the shoreline of Ohio, about 20 miles northeast of Cleveland.

Though no damages were reported, the underwater quake was widely felt up to 60 miles away—throughout northeastern Ohio and in parts of Pennsylvania, Ontario and southeastern Michigan.

The quake and numerous aftershocks occurred near the end of a period of record-setting increases in Great Lakes water levels and coincided with the highest water level ever recorded on Lake Erie. Could there be a connection between Lake Erie seismicity and fluctuating water levels in the lake?

To find out, University of Michigan researchers and their colleagues compiled a new catalog of 437 relatively small Lake Erie-area earthquakes that occurred between 2013 and 2020—the most complete such catalog ever obtained. All of the quakes were smaller than the June 2019 event, and most were likely not noticed by residents of the region.

Then the researchers calculated the stresses that shifting Lake Erie water levels would impart to faults in the rocks beneath the lake and used various statistical methods to look for a correlation between earthquake rates and water levels.

“No conclusive correlation could be established between earthquake rate and water level or water-level change rate,” said U-M geophysicist Yihe Huang, co-author of a study published online May 9 in the journal Seismological Research Letters.

The lack of a smoking gun may be partly due to the limited number of earthquakes in the new catalog, according to the researchers. Also, Lake Erie-induced stress changes on nearby earthquake faults are likely 10s or 100s of times smaller than those seen in places—such as the reservoir behind India’s massive Koyna Dam—where earthquakes have been blamed on changing water levels.

“We cannot fully rule out the impact of increasing water level on reactivating the faults that hosted the 2019 Ohio earthquake sequence,” said study lead author Dongdong Yao, a former U-M postdoctoral research fellow who is now at China University of Geosciences.

“Our results highlight the necessity of denser and closer monitoring of lake seismicity to further investigate the impact of changing water loading on reactivating shallow faults in this region.”

To follow up on their findings, Huang and her colleagues will use novel techniques to monitor Great Lakes regional seismology and will conduct physics-based simulations. Specifically:

In addition, Huang and her team are still analyzing data from a network of eight seismometers, known as the LEEP project for Lake Erie Earthquake exPeriment, that they operated in the western corner of Lake Erie from October 2018 to July 2021.

“We are not certain whether Lake Erie-area faults can produce destructive or deadly earthquakes,” said Huang, assistant professor in the U-M Department of Earth and Environmental Sciences. “That’s why seismologists are interested in studying a magnitude 4-type earthquake sequence from this region.”

Since the early 2010s, eastern Ohio has seen a significant increase in the frequency of relatively small earthquakes. The origins of those earthquakes are poorly understood, but some previous studies suggested they can be attributed to wastewater injection and hydraulic fracturing activities.

Injection-induced seismicity has also been suggested as the trigger for the region’s last magnitude 5 earthquake, which occurred in January 1986 in northeastern Ohio, east of Cleveland in southern Lake County. 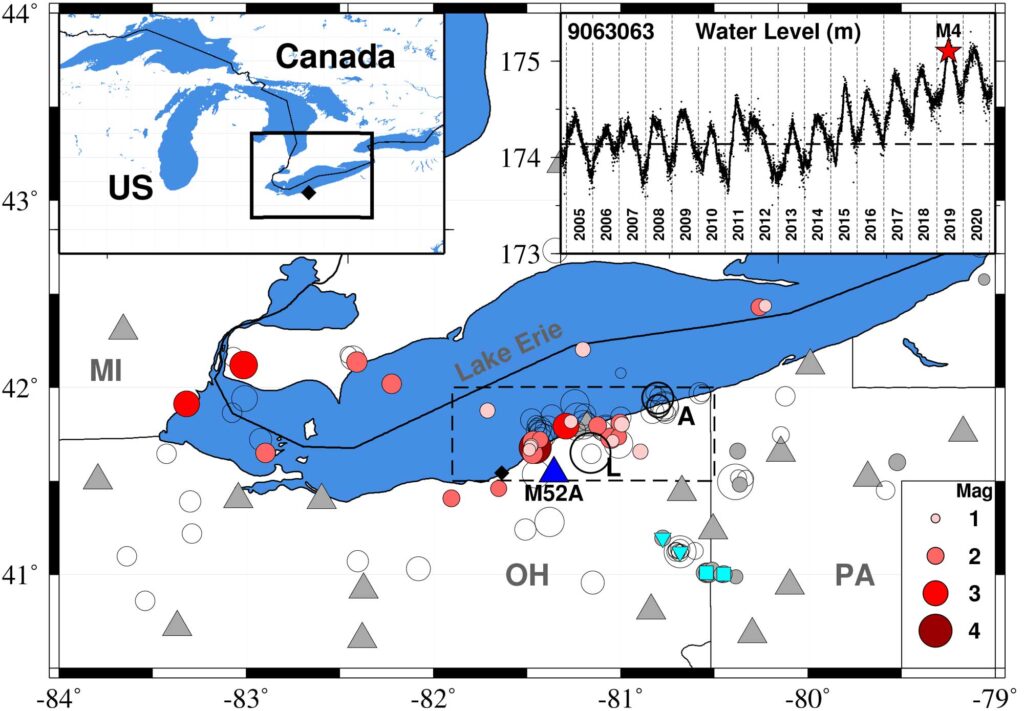 In the new study, which covers the period from 2013 to 2020, the U-M-led team found a cluster of earthquakes in the vicinity of the 1986 temblor and near wastewater disposal wells that were operating during the study period. They concluded that this cluster of quakes “might be potentially induced by wastewater disposal.”

“More intriguingly, the 1986 earthquake was also happening during another period of recorded high-water levels across the Great Lakes,” the authors wrote. “However, due to a large distance relative to Lake Erie, it would be difficult to evaluate the impact of lake-induced stress change on triggering the 1986 earthquake.”

To create their new catalog of 437 Lake Erie-area quakes, the researchers started with 27 previously reported earthquakes listed in the Advanced National Seismic System Comprehensive Earthquake Catalog, which is known as the ComCat catalog.

Most of the earthquakes in the new catalog would not have been felt by area residents and are only detectable by nearby seismometers sensitive to tiny amounts of ground shaking.

The new catalog revealed 20 to 40 small earthquakes per year during the study period, leading up to the June 2019 event. A high seismicity rate in 2019 was dominated by aftershocks following the magnitude 4.0 earthquake.

In addition to compiling the comprehensive new catalog, the team was also first to map the fault that ruptured to produce the 2019 quake, which occurred at a depth of roughly 2 kilometers (1.2 miles).