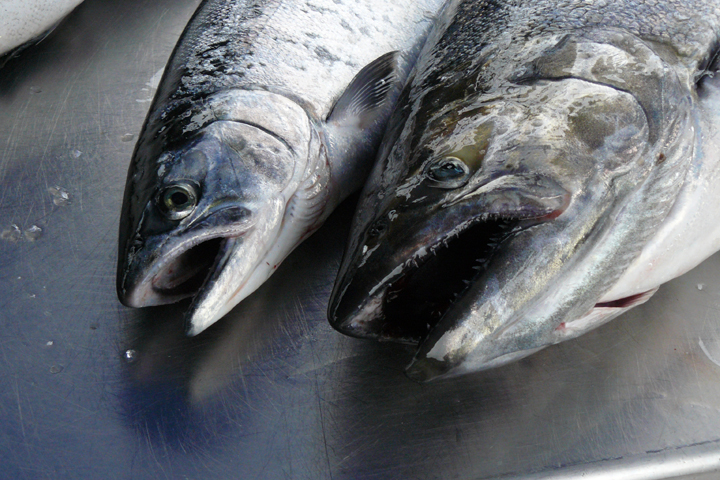 Coho salmon (left) alongside a Chinook salmon. Image credit: Michigan Sea GrantANN ARBOR—Lake Huron’s Chinook salmon fishery will likely never return to its glory days because the lake can no longer support the predatory fish’s main food source, the herring-like alewife, according to a new University of Michigan-led computer-modeling study.

The study’s results suggest that Lake Huron resource managers should focus their efforts on restoration of native fish species such as lake trout, walleye, lake whitefish and lake herring. The findings also suggest that if current trends continue, Lake Michigan will likely experience an alewife collapse similar to Lake Huron’s, followed by the crash of its Chinook salmon fishery there.

“These results serve as a reality check for those who continue to pressure the resource managers to stock Chinook salmon in Lake Huron,” said study co-author Sara Adlerstein-Gonzalez, a fishery scientist at U-M’s School of Natural Resources and Environment.

“The findings are also good news for native fish species and for the restoration of the entire Lake Huron ecosystem. Maybe we should celebrate the improvements in the native fish populations and try to adapt to this new situation.”

A paper summarizing the findings was published online in the journal Ecosystems on March 14. The paper’s first author is Yu-Chun Kao, who conducted the work for his doctoral dissertation at U-M under Adlerstein-Gonzalez. He is now a postdoctoral researcher at Michigan State University and works at the U.S. Geological Survey’s Great Lakes Science Center in Ann Arbor.

The other author of the Ecosystems paper is Edward Rutherford of the National Oceanic and Atmospheric Administration’s Great Lakes Environmental Research Laboratory in Ann Arbor.

Pacific salmon were introduced into the Great Lakes 50 years ago to establish a new recreational fishery and to help control alewives, a non-native species that entered the lakes in the late 1940s and early 1950s. Alewives soon became the main prey species for Chinook salmon and lake trout, which are staples of a Great Lakes fishery valued at more than $4 billion per year. 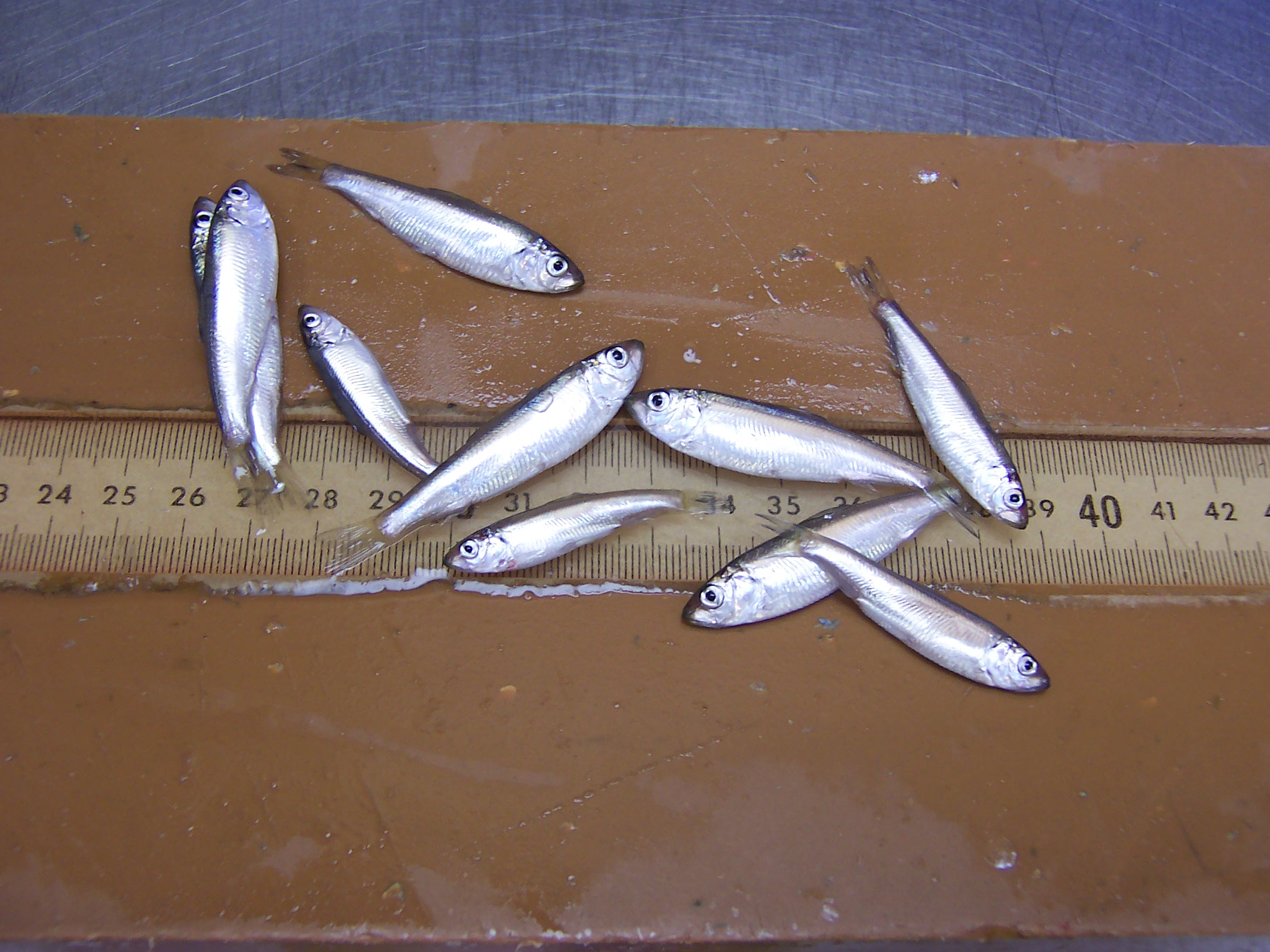 Alewives from Lake Huron. Image credit: Tim O’BrienLake Huron’s alewife population collapsed in 2003, and a sharp Chinook salmon decline soon followed. The state of Michigan and the province of Ontario stopped stocking Chinook salmon in southern Lake Huron in 2014 but continue to stock in the northern part of the lake.

In Lake Michigan, where populations of both alewives and salmon are declining, stocking of Chinooks continues at significantly reduced levels.

The new study is the first attempt to use a food-web modeling approach to assess the various factors behind the 2003 collapse of Lake Huron alewives and the implications for future fish populations there. The total weight or “biomass” of alewives in Lake Huron plunged by more than 90 percent between 2002 and 2003, and the exact causes of the collapse are still debated by anglers and biologists.

Some researchers have suggested the alewife collapse was mainly due to too much predation by Chinook salmon and native lake trout. Others say it likely resulted from a drop in food availability tied to the explosive spread of zebra and quagga mussels starting in the late 1980s.

The computer simulations in the new study show that the collapse was caused by a combination of predation and food limitation—and that predation alone would not have caused the crash. The spread of the non-native mussels, coupled with declining levels of the nutrient phosphorus entering the lake from rivers and streams, were essential factors, according to the new study.

The Lake Huron dominoes fell sequentially, according to the report.

First came increased predation of alewives, due initially to heavier stocking of Chinook salmon and later the result of increased natural reproduction of salmon and a drop in sea-lamprey mortality. Predation of Lake Huron alewives by Chinook salmon likely peaked in the mid-1980s and then remained roughly constant until the alewife collapse, according to the new simulations. 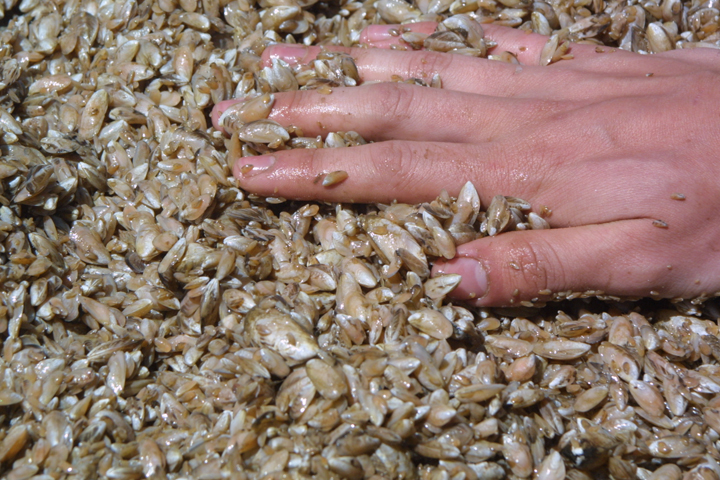 Thousands of fingernail­size quagga mussels from a trawl net dragged along the bottom of Lake Michigan for five minutes. Image credit: Michigan NewsBeginning in the 1990s, quagga mussels spread quickly at a time when the level of phosphorus flowing into the lake from rivers and streams was dropping in response to nutrient abatement programs initiated in the 1970s. Mussels in Lake Huron’s Saginaw Bay compounded the problem by sucking up and storing nutrients near the shore, preventing them from making it into Lake Huron’s main basin.

The loss of essential nutrients in the main basin reduced the amount of algae at the base of the Lake Huron food web. Zooplankton, tiny animals that feed on algae and that provide food for small fish such as alewives and rainbow smelt, suffered.

At the time, alewives and rainbow smelt were the two most important prey species for Chinook salmon in Lake Huron. The new computer simulations show that rainbow smelt suffered significant declines before alewives did, dropping 78 percent by 2002. Deprived of a favorite food, Chinook salmon began to rely more heavily on alewives, and this increased predation hastened the alewife population collapse, according to the study.

This sequence of events can be used to assess the likelihood of an alewife and Chinook salmon collapse in lakes Michigan and Ontario, the researchers said.

“We are seeing all the same warning signs in lakes Michigan and Ontario,” Kao said. “We’re seeing decreasing nutrient loads, a decrease in soft-bodied, bottom-dwelling invertebrates due to the mussels, a decrease in rainbow smelt and, as a result, Chinook salmon feeding almost solely on alewives.”

With researchers from Michigan State and the U.S. Geological Survey, Kao is working on a follow-up modeling study that focuses specifically on the Lake Michigan food web.

Funding for the Lake Huron study was provided by the U.S. Environmental Protection Agency through the Great Lakes Restoration Initiative and by NOAA’s Center for Sponsored Coastal Ocean Research. Study results will be shared with Great Lakes resource managers to help inform management decisions.