The rise of oxygen levels early in Earth’s history paved the way for the spectacular diversity of animal life. But for decades, scientists have struggled to explain the factors that controlled this gradual and stepwise process, which unfolded over nearly 2 billion years.

Now an international research team is proposing that increasing day length on the early Earth—the spinning of the young planet gradually slowed over time, making the days longer—may have boosted the amount of oxygen released by photosynthetic cyanobacteria, thereby shaping the timing of Earth’s oxygenation.

Their conclusion was inspired by a study of present-day microbial communities growing under extreme conditions at the bottom of a submerged Lake Huron sinkhole, 80 feet below the water’s surface. The water in the Middle Island Sinkhole is rich in sulfur and low in oxygen, and the brightly colored bacteria that thrive there are considered good analogs for the single-celled organisms that formed mat-like colonies billions of years ago, carpeting both land and seafloor surfaces. 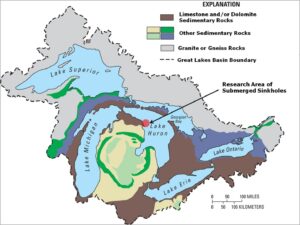 The researchers show that longer day length increases the amount of oxygen released by photosynthetic microbial mats. That finding, in turn, points to a previously unconsidered link between Earth’s oxygenation history and its rotation rate. While the Earth now spins on its axis once every 24 hours, day length was possibly as brief as 6 hours during the planet’s infancy.

The team’s findings were published online Aug. 2 in the journal Nature Geoscience.

Lead authors are Judith Klatt of the Max Planck Institute for Marine Microbiology and Arjun Chennu of the Leibniz Centre for Tropical Marine Research. Klatt is a former postdoctoral researcher in the lab of University of Michigan geomicrobiologist Gregory Dick, who is one of the study’s two corresponding authors. The other co-authors are from U-M and Grand Valley State University.

“An enduring question in the Earth sciences has been how did Earth’s atmosphere get its oxygen, and what factors controlled when this oxygenation took place,” Dick said from the deck of the R/V Storm, a 50-foot NOAA research vessel that carried a team of scientists and scuba divers on a sample-collection trip from the town of Alpena, Michigan, to the Middle Island Sinkhole, several miles offshore. 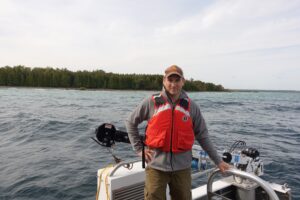 “Our research suggests that the rate at which the Earth is spinning—in other words, its day length—may have had an important effect on the pattern and timing of Earth’s oxygenation,” said Dick, a professor in the U-M Department of Earth and Environmental Sciences.

The researchers simulated the gradual slowing of Earth’s rotation rate and showed that longer days would have boosted the amount of oxygen released by early cyanobacterial mats in a manner that helps explain the planet’s two great oxygenation events.

The project began when co-author Brian Arbic, a physical oceanographer in the U-M Department of Earth and Environmental Sciences, heard a public lecture about Klatt’s work and noted that day length changes could play a role, over geological time, in the photosynthesis story that Dick’s lab was developing.

Cyanobacteria get a bad rap these days because they are the main culprits behind the unsightly and toxic algal blooms that plague Lake Erie and other water bodies around the world.

But these microbes, formerly known as blue-green algae, have been around for billions of years and were the first organisms to figure out how to capture energy from sunlight and use it to produce organic compounds through photosynthesis—releasing oxygen as a byproduct.

Masses of these simple organisms living in primeval seas are credited with releasing oxygen that later allowed for the emergence of multicellular animals. The planet was slowly transformed from one with vanishingly small amounts of oxygen to present-day atmospheric levels of around 21%. 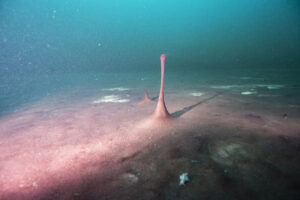 Purple microbial mats in the Middle Island Sinkhole in Lake Huron, June 2019. Small hills and “fingers” like this one in the mats are caused by gases like methane and hydrogen sulfide bubbling up beneath them. Photo credit: Phil Hartmeyer, NOAA Thunder Bay National Marine Sanctuary.

At the Middle Island Sinkhole in Lake Huron, purple oxygen-producing cyanobacteria compete with white sulfur-oxidizing bacteria that use sulfur, not sunlight, as their main energy source.

In a microbial dance repeated daily at the bottom of the Middle Island Sinkhole, filmy sheets of purple and white microbes jockey for position as the day progresses and as environmental conditions slowly shift. The white sulfur-eating bacteria physically cover the purple cyanobacteria in the morning and evening, blocking their access to sunlight and preventing them from carrying out oxygen-producing photosynthesis.

But when sunlight levels increase to a critical threshold, the sulfur-oxidizing bacteria migrate back down below the photosynthetic cyanobacteria, enabling them to start producing oxygen.

The vertical migration of sulfur-oxidizing bacteria has been observed before. What’s new is that the authors of the Nature Geoscience study are the first to link these microbial movements, and the resultant rates of oxygen production, to changing day length throughout Earth’s history.

“Two groups of microbes in the Middle Island Sinkhole mats compete for the uppermost position, with sulfur-oxidizing bacteria sometimes shading the photosynthetically active cyanobacteria,” Klatt said while processing a core sample from Middle Island Sinkhole microbial mats in an Alpena laboratory. “It’s possible that a similar type of competition between microbes contributed to the delay in oxygen production on the early Earth.”

A key to understanding the proposed link between changing day length and Earth’s oxygenation is that longer days extend the afternoon high-light period, allowing photosynthetic cyanobacteria to crank out more oxygen.

“The idea is that with a shorter day length and shorter window for high-light conditions in the afternoon, those white sulfur-eating bacteria would be on top of the photosynthetic bacteria for larger portions of the day, limiting oxygen production,” Dick said as the boat rocked on choppy waters, moored a couple hundred yards from Middle Island. 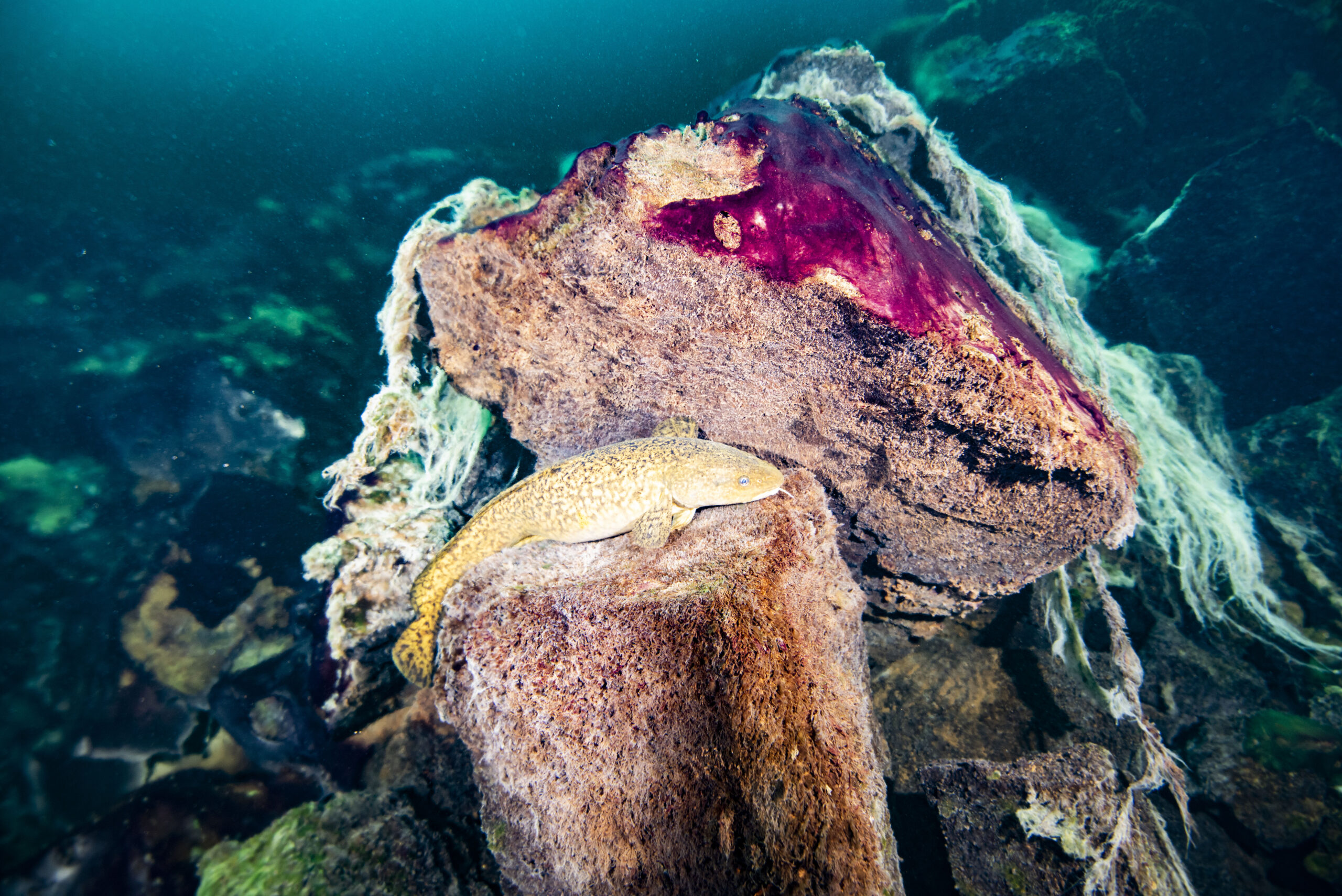 The present-day Lake Huron microbes are believed to be good analogs for ancient organisms in part because the extreme environment at the bottom of the Middle Island Sinkhole likely resembles the harsh conditions that prevailed in the shallow seas of early Earth.

Lake Huron is underlain by 400-million-year-old limestone, dolomite and gypsum bedrock that formed from the saltwater seas that once covered the continent. Over time, the movement of groundwater dissolved some of that bedrock, forming caves and cracks that later collapsed to create both on-land and submerged sinkholes near Alpena.

Cold, oxygen-poor, sulfur-rich groundwater seeps into the bottom of the 300-foot-diameter Middle Island Sinkhole today, driving away most plants and animals but creating an ideal home for certain specialized microbes.

Dick’s team, in collaboration with co-author Bopi Biddanda of the Annis Water Resources Institute at Grand Valley State University, has been studying the microbial mats on the floor of Middle Island Sinkhole for several years, using a variety of techniques. With the help of scuba divers from NOAA’s Thunder Bay National Marine Sanctuary—which is best known for its shipwrecks but is also home to the Middle Island Sinkhole and several others like it—the researchers deployed instruments to the lake floor to study the chemistry and biology there. 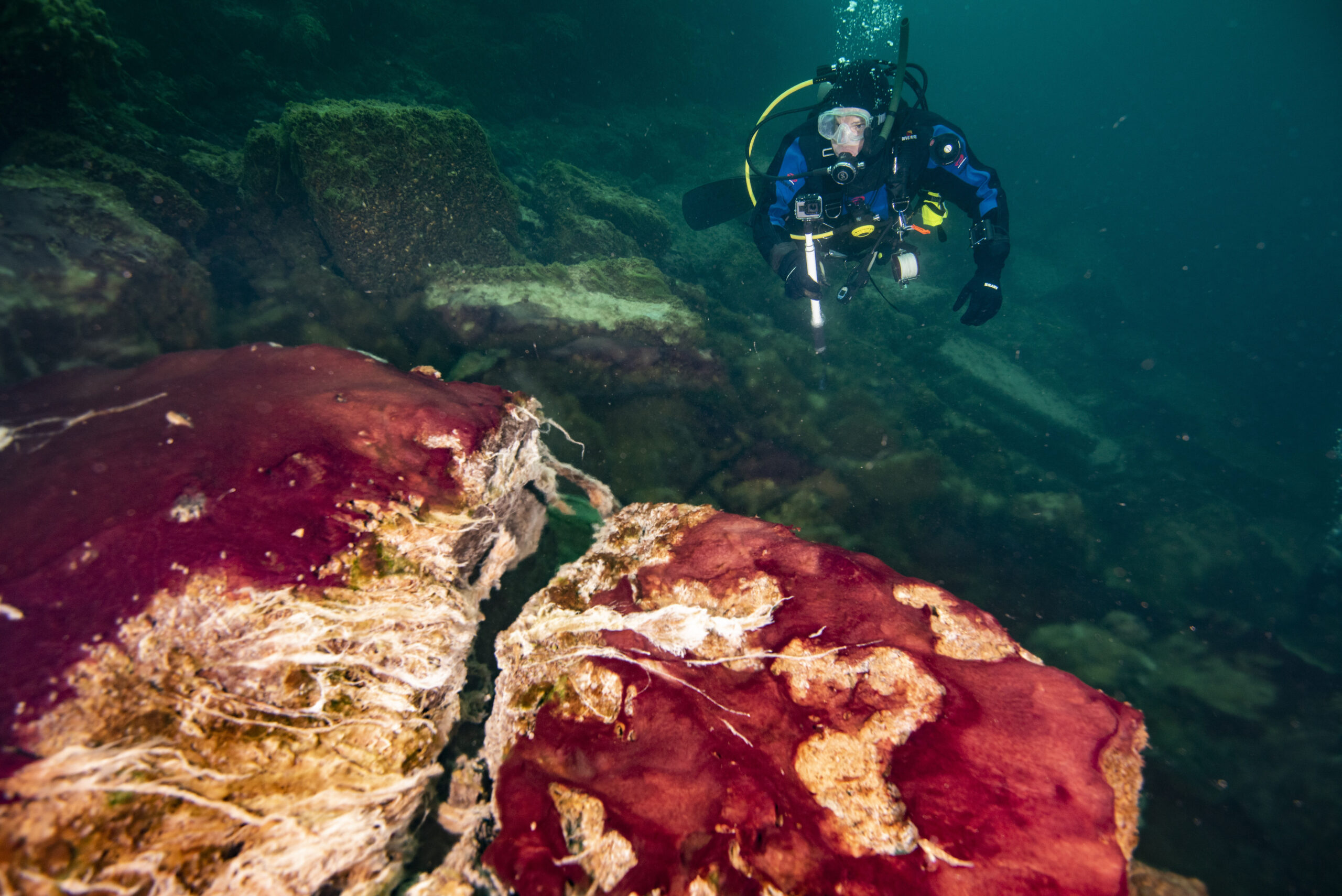 They also brought mat samples to the lab to conduct experiments under controlled conditions.

Klatt hypothesized that the link between day length and oxygen release can be generalized to any given mat ecosystem, based on the physics of oxygen transport. She teamed up with Chennu to conduct detailed modeling studies to relate microbial mat processes to Earth-scale patterns over geological timescales.

The modeling studies revealed that day length does, in fact, shape oxygen release from the mats.

“Simply speaking, there is just less time for the oxygen to leave the mat in shorter days,” Klatt said.

This led the researchers to posit a possible link between longer day lengths and increasing atmospheric oxygen levels. The models show that this proposed mechanism might help explain the distinctive stepwise pattern of Earth’s oxygenation, as well as the persistence of low-oxygen periods through most of the planet’s history.

Throughout most of Earth’s history, atmospheric oxygen was only sparsely available and is believed to have increased in two broad steps. The Great Oxidation Event occurred about 2.4 billion years ago and has generally been credited to the earliest photosynthesizing cyanobacteria. Nearly 2 billion years later a second surge in oxygen, known as the Neoproterozoic Oxygenation Event, occurred.

Earth’s rotation rate has been slowly decreasing since the planet formed about 4.6 billion years ago due to the relentless tug of the moon’s gravity, which creates tidal friction.

The study was funded by grants from the National Science Foundation, the Max Planck Society and the University of Michigan Turner Fellowship. Field operations were supported by the NOAA Great Lakes Environmental Research Laboratory and NOAA’s Thunder Bay National Marine Sanctuary.