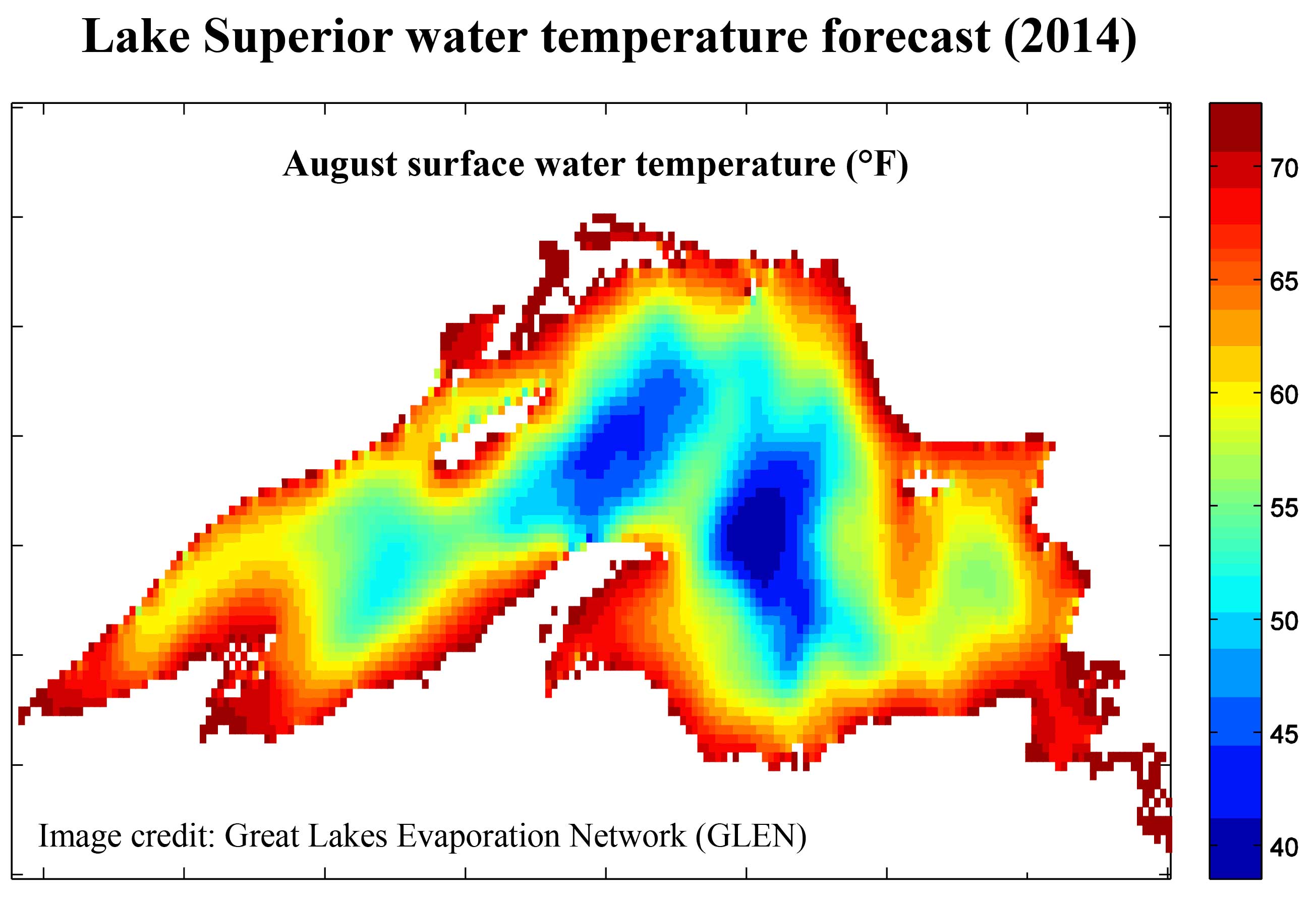 ANN ARBOR—Surface-water temperatures above the deepest parts of Lake Superior are expected to be at least 6 degrees Fahrenheit colder than normal by August, delaying the onset of the evaporation season and raising water levels at a faster-than-normal clip.

Those are some of the findings and implications of a seasonal water-temperature forecast for the lake issued today by a research team funded in part by the University of Michigan.

Reduced evaporation on Lake Superior could result in water-level gains of up to 10 inches by next spring, though a lot will also depend on precipitation totals, said climatologist John Lenters, leader of the research project and a senior scientist at Ann Arbor-based LimnoTech, an environmental consulting firm.

“All else being equal, we’d expect to save maybe 10 inches of water on Lake Superior, but of course the big wild card in the water-level game is precipitation,” Lenters said.

Water-level gains are expected in other Great Lakes, as well, following a frigid winter in which ice covered more than 90 percent of the lakes’ surface and seasonal snowfall records were broken in the Detroit area. Small icebergs are still visible on Lake Superior, the deepest and northernmost of the five Great Lakes, more than a month after the lake is normally ice-free.

In a follow-up to evaporation studies funded by the Great Lakes Integrated Sciences and Assessments Center, a federally funded collaboration between U-M and Michigan State University, Lenters and his colleagues developed a map-based water-temperature forecasting tool called SLATE, which stands for Seasonal Lake Temperature Energetics model. 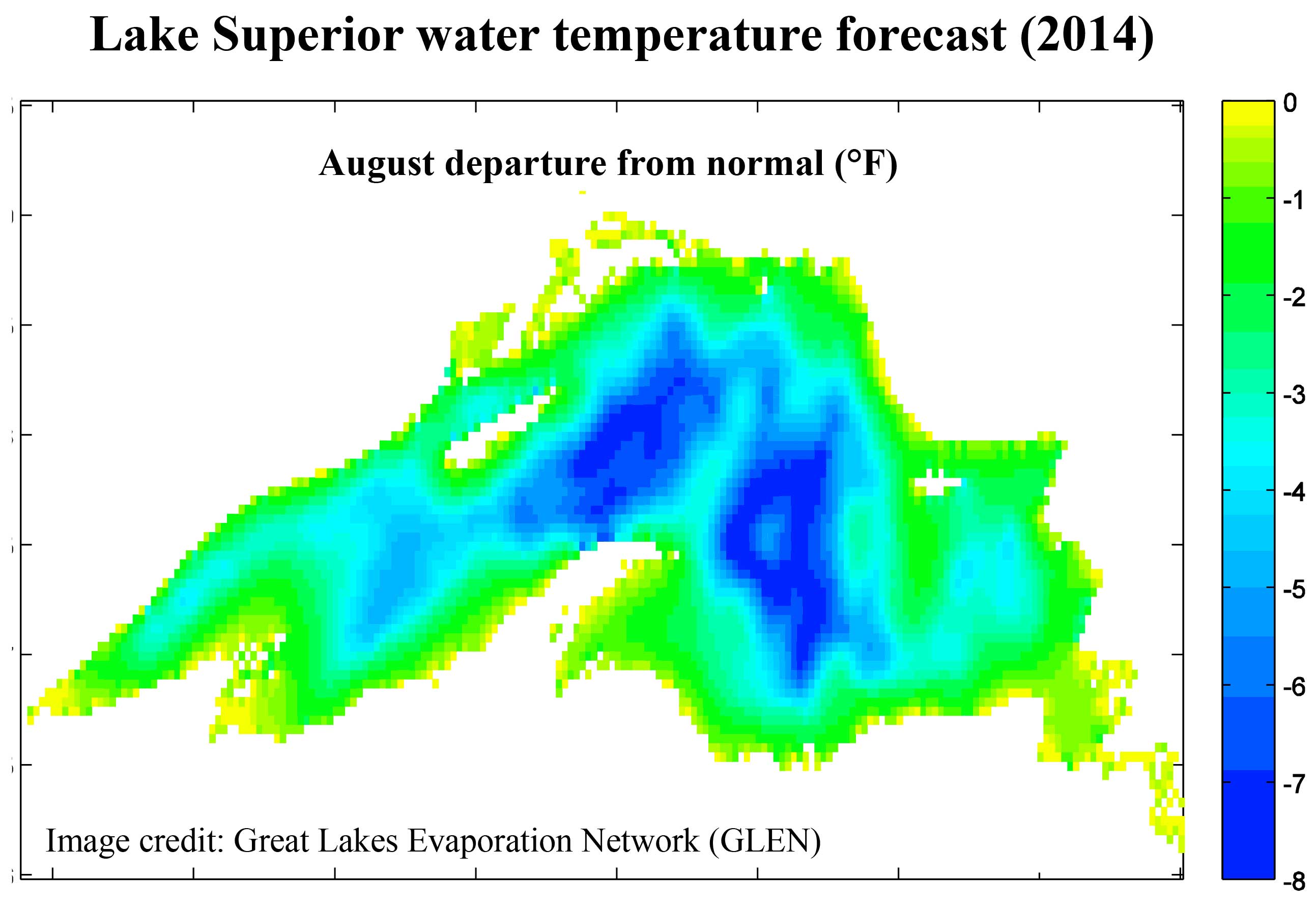 The experimental model was used to generate the Lake Superior forecast and may later be used to create similar surface-water temperature forecasts for all five Great Lakes—possibly even evaporation forecasts. SLATE is believed to be the first map-based forecasting tool that shows anticipated variations in surface-water temperature from place to place across one of the Great Lakes.

The Lake Superior forecast is expected to be of interest to swimmers, boaters, anglers and others who will be affected by chilly water temperatures not seen since perhaps as far back as 1979.

“If you’re planning to go swimming in Lake Superior this summer, you should probably stay close to shore,” said Peter Blanken, a co-investigator from the University of Colorado.

The U.S. Coast Guard in Marquette has already expressed interest in using the Lake Superior forecast to help plan summer search-and-rescue operations. And a long-distance swimmer who is planning a trek from Milwaukee to Chicago in Lake Michigan this summer has also asked about water temperature forecasts.

Lake Superior surface-water temperatures averaged 1 or 2 degrees Fahrenheit below their long-term average at the end of May. According to the new forecast, however, surface temperatures over the deepest parts of the lake–between 1,000 and 1,300 feet–will be at least 6 degrees below normal by August and will still be in the 40s.

The surface-water temperature anomalies in Lake Superior will be greatest over the deepest waters because those areas have an extensive “thermal memory” and can’t rebound as quickly from extremely cold winters. Shallower parts of the lake, however, “forget the winter quite quickly,” Lenters said.

Thermal memory is due to the deep mixing of lake water that occurs each spring: The deeper the water, the longer it takes for the lake to thoroughly mix and warm to 39 degrees, after which the top layer begins to warm much more rapidly.

“The colder-than-normal temperatures in Lake Superior are expected to delay the start of the annual evaporation season by four to six weeks,” Blanken said. “That will definitely be good for water levels.”

“It’s going to be the summer of fog,” Blanken said. “The water will stay really cold, but summer air tends to be warm and humid. And any time you get that combination, you’re going to have condensation and fog—basically evaporation in reverse.”

Detailed Lake Superior depth data, heat flux measurements from Stannard Rock lighthouse, and buoy-based estimates of May surface-water temperatures were fed into the SLATE model to create the summer forecast. Because the model can be used to simulate a lake’s response to both warming and cooling events, it will also prove useful for studying how the Great Lakes may respond to climate change. 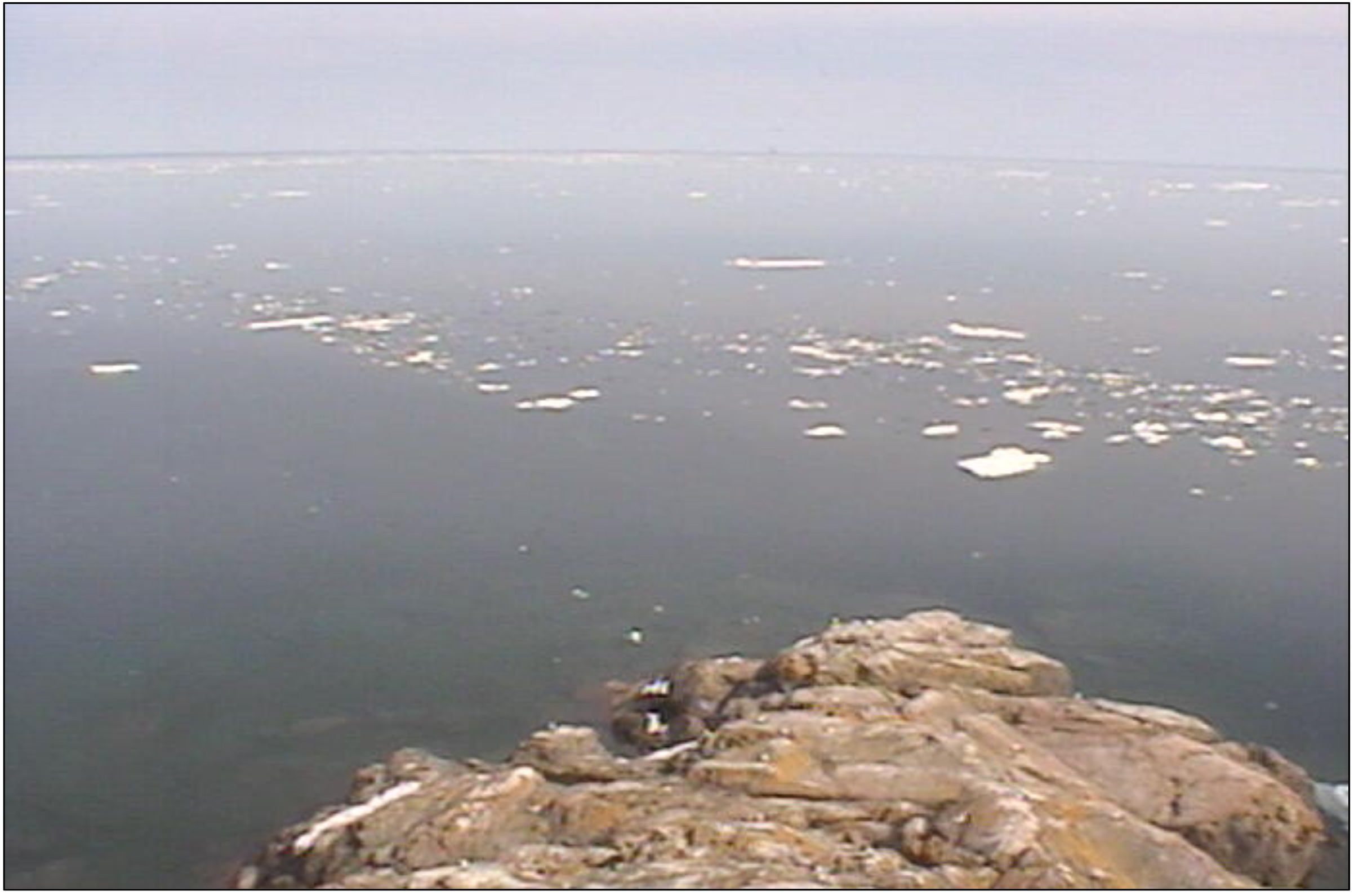 Photo from Granite Island Light Station on May 30, showing lingering ice on Lake Superior. Image credit: Great Lakes Evaporation Network (GLEN)“The way these massive water bodies respond to extreme events like this past winter is complex,” said Don Scavia, director of the Graham Sustainability Institute, which oversees the Great Lakes Integrated Sciences and Assessments Center, known as GLISA, at U-M. “This work will help improve both short- and long-range forecasts of their response to both weather and climate change.”

SLATE was developed by researchers at LimnoTech, the University of Colorado and Environment Canada, with help from collaborators at Michigan Tech Research Institute.

Many of the same researchers helped establish a network of five weather stations—known as the Great Lakes Evaporation Network, or GLEN—to make year-round measurements of Great Lakes evaporation.

Lenters, Blanken and their colleagues presented their latest findings last week at a meeting of the International Association for Great Lakes Research in Hamilton, Ontario.