Landslides, mudslides likely to remain a significant threat in Nepal for months 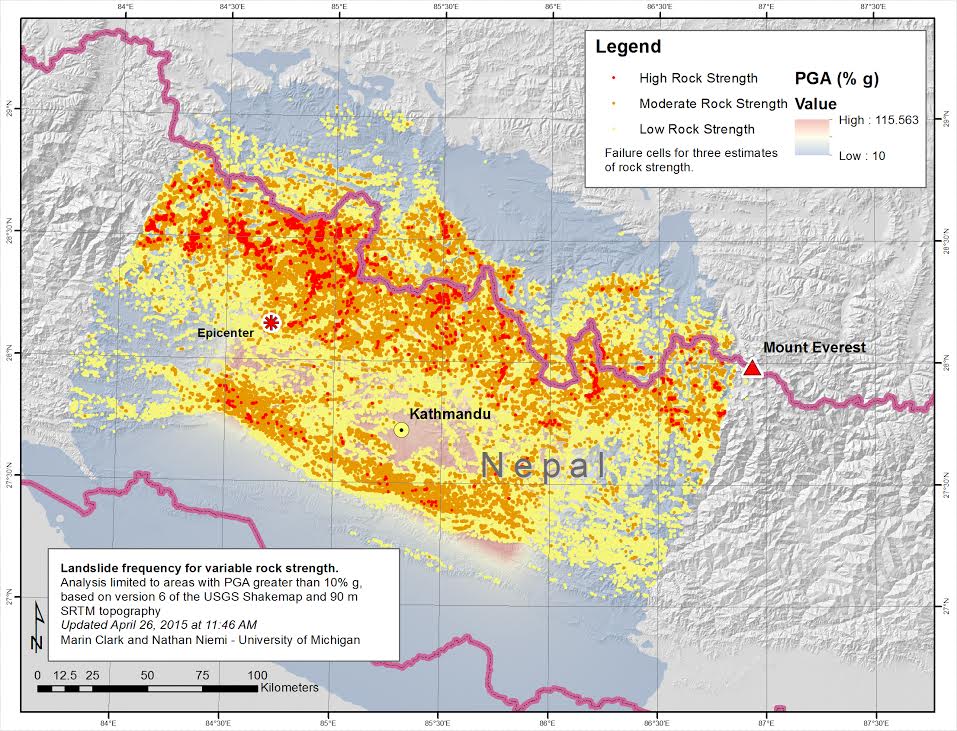 Map showing modeled landslide susceptibility for the magnitude-7.8 Nepal earthquake. The model is based on intensity of ground shaking, steepness of mountain slopes, and rock strength. Models are shown for three estimates of rock strength: red is high, orange is medium, and yellow is weak. The concentration of red dots likely correlates with the greatest risk because numerous landslides are predicted there for all values of rock strength. Image credit: Marin Clark and Nathan Niemi, University of MichiganANN ARBOR—The threat of landslides and mudslides remains high across much of Nepal’s high country, and the risk is likely to increase when the monsoon rains arrive this summer, according to a University of Michigan researcher.

U-M geomorphologist Marin Clark and two colleagues have assessed the landslide hazard in Nepal following Saturday’s magnitude-7.8 earthquake. They looked for locations where landslides likely occurred during the earthquake, as well as places that are at high risk in the coming weeks and months.

The analysis revealed tens of thousands of locations at high risk, Clark said.

“The majority of them, we expect, have already happened and came down all at once with the shaking on Saturday,” she said. “But there will still be slopes that have not yet failed but were weakened. So there will be a continued risk during aftershocks and with the recent rainfall, and again when the monsoon rains arrive this summer.”

Information from the U-M-led study has been shared with the U.S Geological Survey, NASA, the U.S. Agency for International Development and other responding agencies. It is being used help prioritize both satellite observations and the analysis of data from those satellites, said Clark, an associate professor in the U-M Department of Earth and Environmental Sciences.

“The satellites looked first at places where lots of people live, including Kathmandu and the foothills areas to the south,” Clark said. “Those areas do not look significantly impacted by landsliding, but we’re worried about the high country,” she said.

The region at highest risk for landslides and mudslides is the mountainous area along the Nepal-Tibet border, north of Kathmandu and west of Mount Everest, directly above the fault rupture. The highest-risk zone is at elevations above 8,200 feet in a region that covers 17,550 square miles, which is roughly twice the size of Massachusetts.

Cloud cover has blocked observation of much of that region since Saturday’s earthquake. But news stories and social media reports of landslides in Nepal’s Gorkha District and Langtang Valley are consistent with the Clark team’s assessment, which showed that those areas are at high risk, she said.

Remote villages are scattered throughout the high-risk zone, which also contains the main highway that connects Kathmandu and Tibet. The area is popular with trekkers and mountaineers, as well. 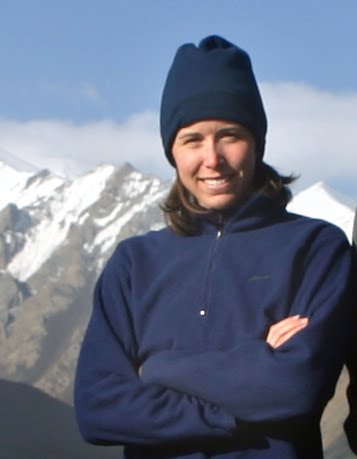 Marin K. Clark, Associate Professor“Many small Nepalese villages throughout this region have likely been cut off from the rescue operation,” Clark said. “This is also high season for trekking and mountaineering, so I expect there are a large number of foreign tourists there, as well.”

The Clark team’s assessment of the landslide risk was based on a computer analysis that looked at earthquake shaking, slope steepness and the strength of various rock types.

Their initial analysis was completed Saturday afternoon and was shared with the U.S. Geological Survey and other agencies on Saturday evening. It was revised Sunday morning and distributed through the National Earthquake Hazards Reduction Program on Sunday afternoon.

More than 200,000 landslides occurred following a magnitude-7.9 earthquake in a mountainous region of Sichuan Province, China, in 2008, according to Clark. Many of those landslides blocked roads, which slowed response and recovery efforts. The final death toll for that quake was about 70,000.

Landsliding is a general term for slowly to very rapidly descending rock and debris. A mudslide or mudflow is a fluid mix of mud and debris that moves down a slope.

Landslides in mountainous regions can also block river valleys, creating a significant flooding hazard. Water builds up behind those dam-like structures, creating the potential for catastrophic flooding if the dams are overtopped and then fail.

“With the satellite images, we’ll be looking first at the highest-risk landslide areas that are close to big rivers,” Clark said. “Those locations are high priorities.”

Clark’s collaborators on the landslide hazard assessment are U-M’s Nathan Niemi and Sean Gallen, a former U-M postdoctoral researcher under Clark who recently accepted a position at ETH Zurich in Switzerland.

For more information, including landslide maps from the study, visit Clark’s home page at myumi.ch/651Qr.