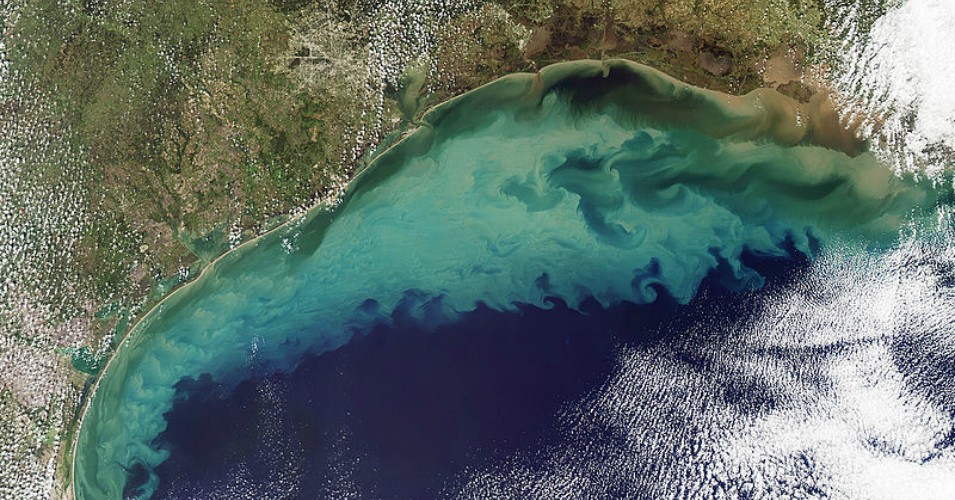 ANN ARBOR—University of Michigan scientists and their colleagues are forecasting this summer’s Gulf of Mexico hypoxic area or “dead zone”—an area of low to no oxygen that can kill fish and other marine life—to be approximately 6,700 square miles, roughly the size of Connecticut and Delaware combined.

The 2020 forecast is about 1,100 square miles smaller than last year and substantially less than the record of 8,776 square miles set in 2017—but still larger than the long-term average measured size of 5,387 square miles.

The annual forecast was released today by the National Oceanic and Atmospheric Administration, which funds the work. The prediction is based on U.S. Geological Survey river flow and nutrient data.

A major factor contributing to this year’s above-average hypoxic zone are the high river flows and nutrient loads delivered to the Gulf this spring, primarily from the Mississippi and Atchafalaya rivers. This past May, discharge in the Mississippi and Atchafalaya rivers was about 30% above the long-term average between 1980 and 2019, according to USGS.

“Each year, the forecasts are reported to be bigger or smaller than some long-term average, when in fact the long-term average is not acceptable,” said Don Scavia, professor emeritus at the U-M School for Environment and Sustainability. “Large reductions are called for in the federal-state action plans that have been in place for almost 20 years. Clearly, something different needs to be done in the watershed to actually reduce the nutrient loads and reduce the size of the dead zone.”

Scavia is a member of NOAA-funded teams that produce annual forecasts for the Gulf of Mexico, Chesapeake Bay and Lake Erie.

The annual Gulf of Mexico dead zone is primarily caused by excess nutrient pollution from human activities in urban and agricultural areas throughout the Mississippi River watershed. When the excess nutrients reach the Gulf, they stimulate an overgrowth of algae, which eventually die and decompose, depleting oxygen as they sink to the bottom.

The resulting low oxygen levels near the bottom of the Gulf cannot support most marine life. Fish, shrimp and crabs often swim out of the area, but animals that are unable to swim or move away are stressed or killed by the low oxygen. Considered one of the world’s largest, the Gulf of Mexico dead zone occurs every summer.

“Not only does the dead zone hurt marine life, but it also harms commercial and recreational fisheries and the communities they support,” said Nicole LeBouf, acting director of NOAA’s National Ocean Service. “The annual dead zone makes large areas unavailable for species that depend on the areas for their survival and places continued strain on the region’s living resources and coastal economies.”

USGS operates more than 3,000 real-time stream gauges, 50 real-time nitrate sensors and 35 long-term monitoring sites to measure nutrients in rivers throughout the Mississippi/Atchafalaya watershed. Data from these networks are used to track long-term changes in nutrient inputs to the Gulf and to help build models of nutrient sources and hotspots within the watershed.

“The annually recurring Gulf of Mexico hypoxic zone is primarily caused by excess nutrient pollution occurring throughout the Mississippi River watershed,” said Don Cline, associate director for the USGS Water Resources Mission Area. “Information on where these sources contribute nutrients across the watershed can help guide management approaches in the Gulf.”

While the hypoxic zone forecast assumes typical coastal weather conditions, the measured dead zone size could be disrupted and its size could be changed by major weather events, such as hurricanes and tropical storms, which mix ocean waters, as occurred in 2018 and 2019. A NOAA-supported monitoring survey, scheduled for later this summer, will confirm the size of the 2020 dead zone, and is a key test of the accuracy of NOAA’s models.

This is the third year NOAA is producing its own forecast, using a suite of NOAA-supported hypoxia forecast models jointly developed by the agency and its partners—teams of researchers at the University of Michigan, Louisiana State University, William & Mary’s Virginia Institute of Marine Science, North Carolina State University and Dalhousie University, and the USGS, which provides the loading data for the models.

The NOAA forecast integrates the results of these multiple models into a separate average forecast and is released in coordination with these external groups, some of which are also developing independent forecasts.

NOAA and its partners continue to develop additional hypoxia forecast capabilities to understand impacts on living marine resources, the relationship between hypoxia volume and area, and how hypoxia changes through time and across the Gulf.