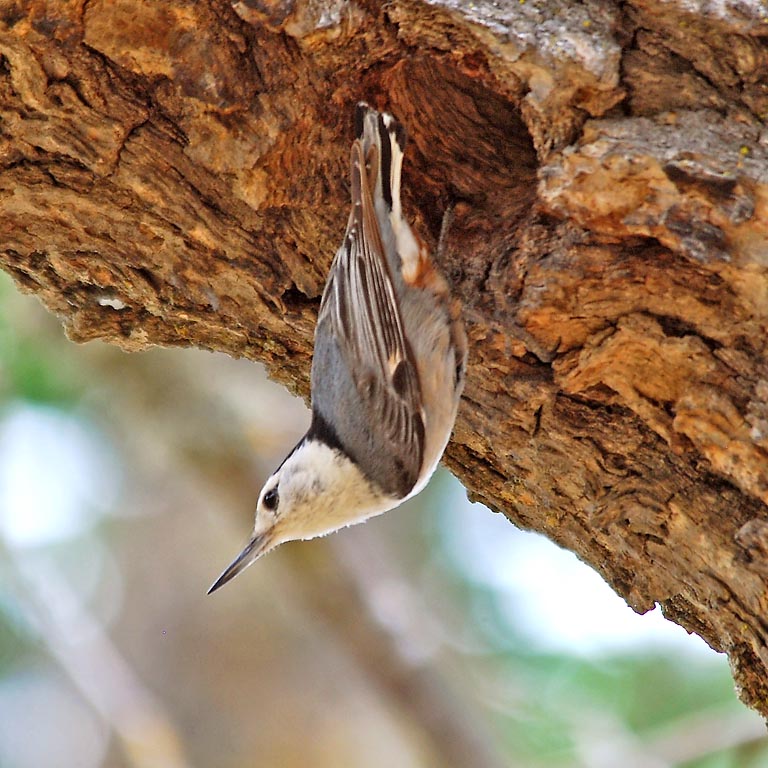 The white-breasted nuthatch has good dim-light vision and has advanced the timing of nesting in response to light exposure, according to a new study in the journal Nature. Image credit: Dave Keeling

Looking for a bird’s-eye view of human impact? A new study in the journal Nature provides the most comprehensive picture yet of how human-caused noise and light pollution affect birds in North America, including how these factors may interact with or mask the impacts of climate change.

The effects of noise and light pollution on the health of bird populations had been largely overlooked until some recent studies suggested that these stressors can harm individual species. With this new study, a continent-wide picture has emerged.

“Our study provides the most comprehensive evidence that noise and light can profoundly alter reproduction of birds, even when accounting for other aspects of human activities.”
Clint Francis

“Our study provides the most comprehensive evidence that noise and light can profoundly alter reproduction of birds, even when accounting for other aspects of human activities,” said biologist Clint Francis of California Polytechnic State University, one of the study’s lead authors.

“This work underscores the tremendous scale of human-made noise and light and their pervasive influence on important animals with which we share landscapes,” said study co-author Neil Carter, a conservation ecologist at the University of Michigan School for Environment and Sustainability. Former U-M postdoctoral researcher Mark Ditmer is also a co-author.

The paper, “Sensory pollutants alter bird phenology and fitness across a continent,” was published online Nov. 11.

The research team looked at a huge collection of data sets—including those collected by citizen scientists through the NestWatch Program—to assess how artificial light and human-caused noise affected the reproductive success of 58,506 nests from 142 bird species across North America. They considered several factors for each nest, including the time of year breeding occurred and whether at least one chick fledged from the nest. 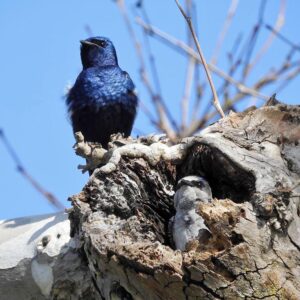 The western bluebird has benefited from light pollution in terms of reproductive success, according to a new study in Nature. Image credit: Dave Keeling

Birds time their reproduction to coincide with peak food availability to feed their young, using daylight cues to breed around the same time each year. The researchers found that light pollution causes birds to begin nesting as much as a month earlier than normal in open environments, such as grasslands or wetlands, and 18 days earlier in forested environments.

The consequence could be a mismatch in timing—hungry chicks may hatch before their food is readily available. If that happens, these early season nests may be less successful at fledging at least one chick, but the situation is complicated by climate change.

As the planet warms, birds’ food is available earlier due to warmer weather. Birds that maintain their historical breeding times because their internal clocks are set to changes in day length may have fewer chicks survive because the food source they rely on already came and went.

These findings suggest two conclusions about birds’ responses to climate change. First, at least temporarily, birds in artificially lit conditions may be tracking climate change better than those in dark areas. 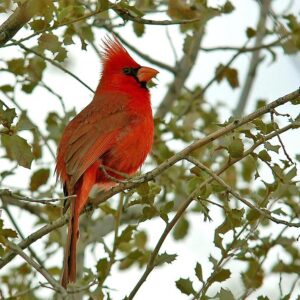 The northern cardinal has a relatively low-frequency song and has delayed breeding in response to noise pollution, according to a new study in the journal Nature. Image credit: Dave Keeling

Second, when scientists thought birds were adjusting their reproductive timing to climate change, birds may have actually been responding to light cues instead, because many studies were done in areas exposed to some light pollution.

The researchers delved into greater detail for 27 bird species, looking for physical traits that could explain the variations in species’ responses to light and noise. Common sources of light pollution include the glow of city lights, and common sources of human-caused noise include highway traffic and aircraft flying overhead.

They found that a bird’s ability to see in low light and the pitch of its call were related to the species’ responses to light and noise pollution, respectively.

When they examined the effects of noise pollution, the researchers found that birds living in forested environments tended to be more sensitive to noise than birds in open environments.

Noise pollution delayed nesting for birds whose songs are at a lower frequency and thus more difficult to hear through low-frequency, human-caused noise. Mating decisions are made based on the male’s song, and in some cases, females need to hear the male’s song to become physically ready to breed.

These trait- and environment-specific results have strong implications for managing wildlands, according to the researchers.

“This work directly informs the conservation of wild bird populations,” said U-M’s Carter. “Land managers and conservation practitioners, for example, can prioritize the habitats and species at most risk from light and noise pollution and better assess the environmental impacts of new developments, as well as mitigate existing ones.

“We also hope our results can motivate individuals and communities to reduce their own light and sound footprints.”

The study is the first step toward a larger goal of developing a sensitivity index for all North American birds. The index would allow managers and conservationists to cross-reference multiple physical traits for one species to assess how factors such as light and noise pollution would affect each species.

In addition to Francis, Carter and Ditmer, the authors of the Nature paper are Masayuki Senzaki, Jennifer Phillips and Ashley Wilson of Cal Poly; Jesse Barber and Christopher McClure of Boise State University; Caren Cooper and Jelena Vukomanovic of North Carolina State University; Kurt Fristrup of the National Park Service; Daniel Mennitt of Exponent engineering and scientific consulting; and Luke Tyrrell of the State University of New York at Plattsburgh.

The work was supported by grants from the National Science Foundation, NASA and the Japan Society for the Promotion of Science.

Once the paper has been published online, it will be available at nature.com.

News release written by Rachel Henry of California Polytechnic State University, with additional material provided by Jim Erickson of the University of Michigan.